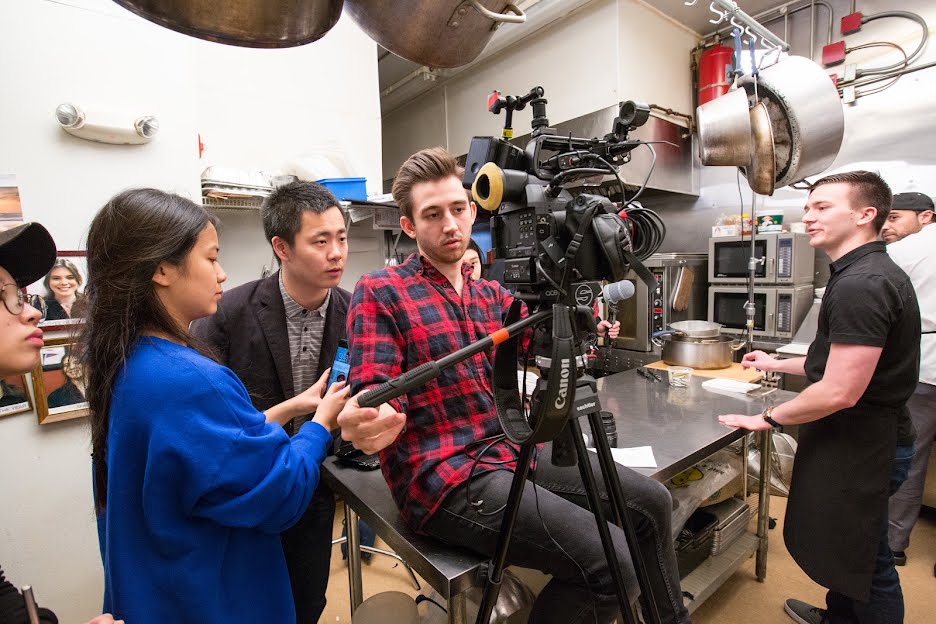 As the lights dimmed in the RISD Auditorium on Saturday, May 13, the enthusiastic crowd waiting to watch the 2017 Film/Animation/Video Senior Show roared its approval. As the last of four evening screenings, the Saturday-night show featured animated and live-action films by 17 graduating seniors along with lobby installations by students in FAV’s Open Media track.

“Tonight we… celebrate the hard work of these young artists,” Department Head Dennis Hlynsky 74 FAV wrote in the program. “Each of these projects has been formed through an artistic practice rooted in the identity and vision of its maker.”

Having begun their senior degree projects last September—and in some cases, even earlier—students worked intently throughout the year to oversee every aspect of what it takes to produce highly professional films. Whether creating original animated work or live action pieces, they conceive of the story, write the script and/or storyboards, scout out actors and crew members, shoot raw footage, create the soundtrack and handle all post-production work, often working collaboratively to help each other through various phases of the process.

Pag Lampas ng Burol (Beyond the Hill), a live-action film by CJ Ormita 17 FAV that opened the Saturday show, will hold its own at any professional film festival, which is often the next stop for many of the films premiered at RISD. Stunningly shot on location in the rural Philippines where Ormita grew up, the quiet, 16-minute film tells the story of two orphaned brothers finding their way after their mother’s death.

Judy Kim 17 FAV is among the seniors in the Live Action track who chose to shoot their films closer to home. After filming most of her 11-minute comedy Window by the Table at Wara Wara, a Japanese restaurant in Providence, during Wintersession, she says the owners and kitchen crew “were really nice” about allowing her to return over the following months to film title scenes and other bits.

Noting that her RISD experience was exceptional, Kim says she appreciates the freedom and access to diverse equipment she was afforded. “Providence is such a unique environment for filmmakers,” she adds. “There are all these cool locations and lots of people—like actors in local theater companies and students at the Berklee College of Music in Boston—who are willing to help out and donate their time.”

This fall Kim is entering a three-year graduate filmmaking program at CalArts and hopes to someday emulate her RISD mentors—including longtime FAV Professor Peter O’Neill MFA 73 FAV—by getting into teaching. “Peter is a filmmaker, so he has been able to give me really great professional advice as well as ‘life advice,’” she says. “He has helped me weigh the pros and cons of different post-RISD options.”

Kim’s classmate Jerry Ma 17 FAV/18 ID—who’s pursuing a double major and has another year to go to complete his credits in Industrial Design—also shot his film at a local restaurant. “I would say that Good Intentions is pretty close to what I had in mind when I wrote the script,” he says of his final cut. “Visually, it’s pretty straightforward. I spent a lot of time prepping the actors up front and then allowed their chemistry to come together on set, which resulted in some really spontaneous and natural moments.”

Has the experience changed him? “At the end of every academic year I feel like a completely different person!” Ma responds with a laugh. “The senior FAV project was pretty stressful, but it forced me to learn the whole spectrum of skills. Unlike traditional film schools, RISD doesn’t teach one specific aspect of filmmaking—like editing or shooting—but it gives you the ability to put together a team so you can create something greater than any one person could do on their own.”

After a bit of culture shock last year, Yasemin Orhan 18 FAV has been adjusting to life far from Istanbul and warming to the camaraderie in the Film/Animation/Video department.

Graduating seniors Emily Neilson 15 FAV and Katy Strutz 15 IL are thrilled to move on to LAIKA, a creative animation studio outside Portland, OR.