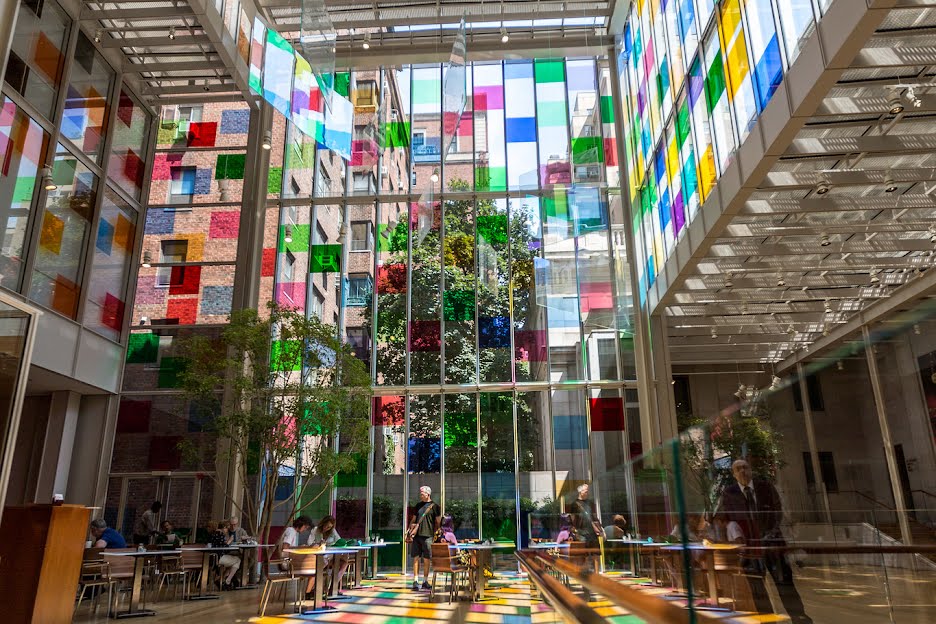 “You learn something from every piece you make, whether or not you consider it successful,” says conceptual artist Spencer Finch MFA 89 SC, who came to RISD in early November as part of the Sculpture department’s fall visiting artist series. Showing highlights from his 30-year practice, he shared with the large crowd gathered in the Metcalf Auditorium the varied and surprising approaches he takes to making art.

Finch finds color and its relationships to memory and language “endlessly fascinating.” He kept a dream diary for two years and then visually documented the results via 102 Colors from My Dreams (2002), a series of Rorschach-style inkblots that included the bright purple of a vest Bob Dylan wore in one dream and the exact pink of a ham that appeared in another.

Tapping into his own dreams is one of the many approaches Finch uses to create work that connects with viewers and the world we share on a personal, almost subconscious level. What do we see when we close our eyes? How does each of us perceive the colors around us fading to gray when the sun goes down?

“Boredom and frustration are necessary parts of the artistic process,” Finch told students. He advised them to put aside technological devices when trying to tap into their creativity.

A proponent of the plein air technique and the importance of direct experience, Finch traveled to the Grand Canyon in 1995 for inspiration. But given the site’s overwhelming popularity and the preponderance of repetitious photographs and paintings it has inspired, he opted for his own unique approach: closing his eyes and using ink on mutsu paper to recreate the reddish hues that appeared underneath his eyelids at different times during the course of one day.

When Finch was invited to create a piece for the 9/11 Memorial in NYC, he again focused on perception and the natural world. “It had to be about that human quality of remembering,” Finch told a New York Times reporter at the time, “how it’s so fuzzy in some ways, and in other ways it’s so completely clear.” Trying to Remember the Color of the Sky on That September Morning (2014) is made up of 2,983 individual squares of Fabriano Italian paper—one for each victim of the terrorist attack—hand-painted in 2,983 different shades of blue.

The Color of Water (2011), an earlier piece on permanent display at the Christ Church Greyfriars in London, allows viewers to match the color of the English Channel at any given moment to one of 100 Pantone swatches arranged on a color wheel. Viewers are then encouraged to select from a collection of flags dyed the exact same shades and raise the matching flag in a nearby park.

“My practice is rooted in experimentation and the scientific method,” Finch says, “but also in the beauty of subjectivity—that there is no capital-T Truth.”

Finch continues to make and show work at a brisk pace. In 2017 alone he showed his work in five solo exhibitions in Europe and the US: at Lisson Gallery in Milan; Galerie Nordenhake in Berlin; Norton Museum of Art in West Palm Beach, FL; Seattle Art Museum in Seattle, WA; and MASS MoCA in North Adams, MA. He was happy to offer students advice about maintaining an artistic practice. “It’s important to build a community of people you can talk to about your work,” he said. “I’m always trying to visually engage viewers without compromising my concepts, and I never get sick of making art. That’s when I feel the most human.”

Ceramics Department Head Katy Schimert searches the ocean’s depths and captures the public’s imagination with a solo show and residency at UMass/Amherst.