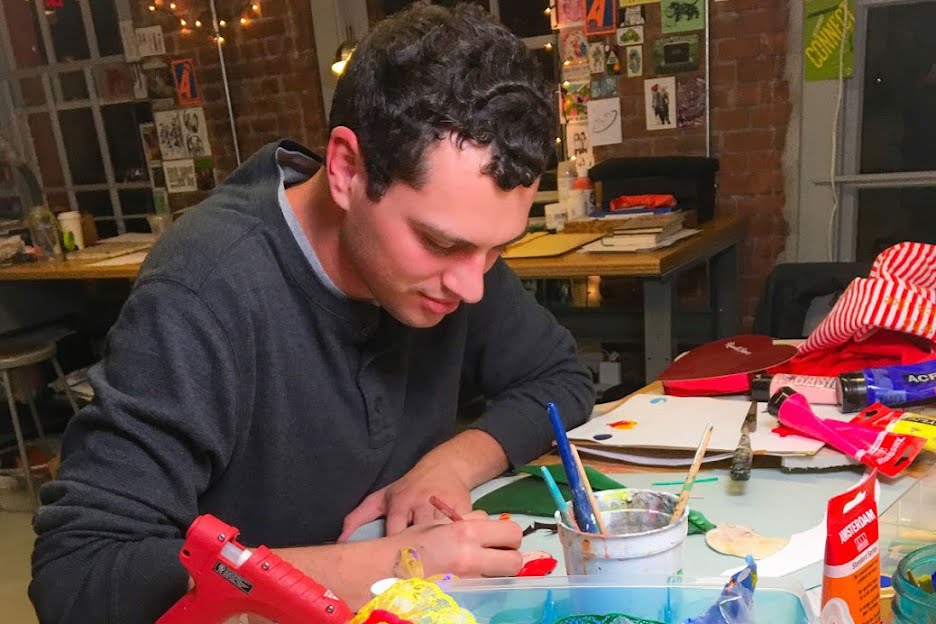 Patrick Hulse 17 IL says that before he came to RISD he was incredibly shy. But once his Foundation professors made it clear that students need to talk during crits, he began to share his ideas—tentatively at first, but then with increasingly more certainty. “People said, ‘We like what you’re saying, talk more,’” he recalls incredulously. “It was such an empowering experience. I learned at RISD that my voice matters.”

Once Hulse began to share his thoughts, the floodgates opened and his confidence soared. By the middle of junior year, he decided to run for president of the Student Alliance, RISD’s student governing body. “I never in a million years would have imagined myself in this role,” he says. “But the opportunity presented itself and I went for it.”

The Student Alliance is “here to make things happen for RISD students,” Hulse explains. “We serve on academic committees, meet important people and have access to a lot of information that we share with the rest of the student body.”

Hulse cites a campus-wide initiative focused on identity and intersectionality as an example of how the Student Alliance contributes to larger conversations at RISD. “We heard that RISD Global Initiative was responding to last year’s Not Your Token rallies with this -isms project, so we partnered with them to get the word out,” he says. “A lot of stuff came to the surface last year [around race and identity] that really needed to come to the surface.”

Do these community-minded experiences feed into the work Hulse is producing in the studio? “I’m not sure if they relate specifically to my art making,” the Illustration major says, “but there are always repercussions. The people I meet through student government bring an added layer of richness to the things I’m thinking about that seeps into my artwork.”

Hulse’s work tends to focus on childhood memories and family stories. “My mom and dad are both storytellers,” he says. “They’ve passed down these iconic moments from their childhoods – when the rental car started spewing out popcorn, for example. I’ve been collecting them over the years and cataloguing them in my mind.”

Hulse also admits that he’s inspired by almost everything from the past. He lived in historic Cape May, NJ for the past two summers and says the setting feels like it was “plucked from a storybook. It’s incredibly inspiring visually,” he adds, “with a cute little firehouse and candy-colored Victorian houses.”

Interning in the marketing department of Cape May’s Cape Resorts, Hulse got to apply that inspiration to promoting the weekly carnival, creating ads for local hotels and restaurants and illustrating a promotional chapter book for kids that’s due to be published later this fall. “I’m so excited about the book!” he exclaims. “I got to do the cover art, too.”

Somewhat ironically, Hulse says he rarely works two-dimensionally at RISD. “In Illustration we’re not stuck to a flat piece of paper,” he explains. “Our department focuses on how you’re going to tell a story – how you connect with people – but not which medium to use.”

For instance, Hulse’s Glass Factory (made of wood and found materials) “is an animated whirligig that tells the story of an old giantess who owns a glass factory run with the help of elves.” Fatal Fashion is a board game based on a Victorian fashion trend he read about that inspired wealthy Englishmen and women to wear vivid green clothing dyed with a mixture of arsenic and copper that was actually poisoning them. He designed the game during one of his favorite classes: Making Play, taught by Illustration Critic Jason Beene 01 IL.

Other favorite professors include Illustration stalwarts Judy Sue Goodwin Sturges 66 IL, who introduced Hulse to the conceptual side of illustration when he was a sophomore, and Fred Lynch 86 IL, who is “notorious for his long critiques. But he has a phenomenal grasp of… what it means to be an illustrator,” Hulse adds. “A lot of students are horrified by the real world – by the notion that you have to sell out when school is over. But he makes it all sound OK.”

After RISD Hulse hopes to realize his lifelong dream of building sets and rides for Disney theme parks. He’d also love to work at a children’s museum someday and hopes to publish his own picture books based on family stories.

As an exhibition of his work came to a close at the ISB Gallery, celebrated author/illustrator David Macaulay BArch 69 spoke about the way he thinks and works.