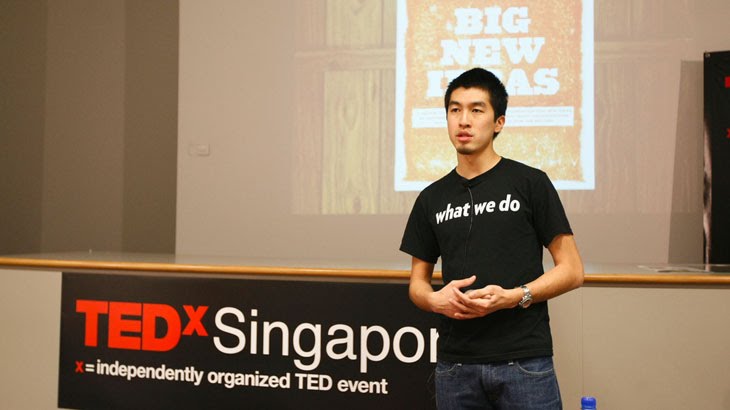 Tino Chow 09 ID calls himself a designer, thinker, activist, storyteller and troublemaker. He’s as inspired by the potential of architecture to address challenges posed by natural disaster as he is by political posters and cancer-fighting foods. (He’s even been inspired by a simple dare todo a cartwheel for the first time while in mid-run).

The theme at this year’s TedxHuntsville was, simply, “explore.” Chow, who attended his first TED conference by winning a fellowship as a RISD senior, was a co-founder of the solidly successful student-run conferenceA Better World by Design in Providence. In Huntsville, he gave a talk on what he calls one of the oldest clichés used to inspire others: Follow your dreams.

“Following your dreams is perhaps one of the most frequently used clichés and advice given to young people,” Chow comments on his website. “However, as we mature, our dreams seem to be further out of reach, and we seem to lose touch with its meaning and power. In my talk at TedxHuntsville, I explore the idea of following your dreams by starting projects on the side. The Wright Brothers did it, the founders of Twitter have done it, Google does, too, and 3M does it.”

Chow, who grew up in Hong Kong and served as an officer in the Singapore military before coming to RISD, says that being an architect of multiple creative projects – including projects that started out as diversions – has “helped define my passion, guided me through an amazing journey, allowed me to follow my dreams and made me who I am.”

Since graduation Chow’s many cross-disciplinary pursuits have included biking cross-country and launchingBig New Ideas, a multidisciplinary team of creative thinkers and doers he co-founded in 2009. The studio, based in Providence and San Francisco, works with nonprofits, grassroots projects and other organizations to help them communicate effectively and increase community engagement.