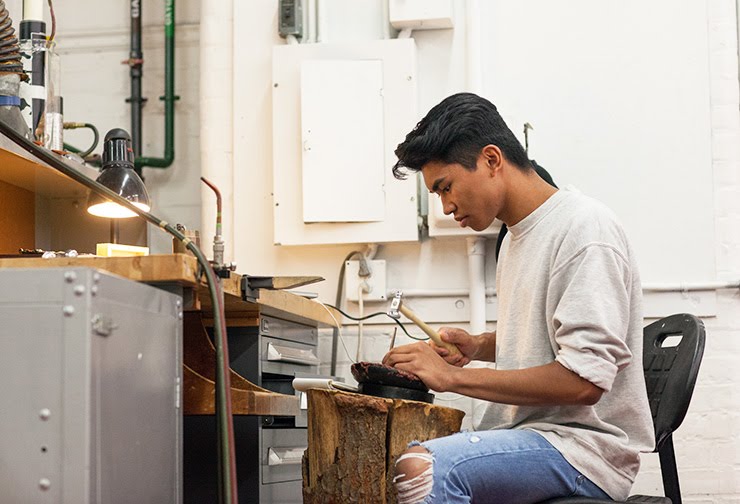 Jewelry + Metalsmithing major Anthony Anderson 18 JM discovered his talent for the medium by happy accident during his first year at RISD.

When verbal communication eluded him as a young child, Anthony Anderson 18 JM focused on making art instead. “When I was four I used to fill little Monopoly houses with different colored crayon shavings and press them against a space heater to make my own crayon colors,” he says. “Art was something I could control, [so] my lack of control in other areas made me want to hone my artistic side.”

Today Anderson is thriving as a Jewelry + Metalsmithing major, learning new ways to use art to champion social justice. “RISD has instilled in me the belief that you can say things with artwork that matter,” says the junior, who came to the US from the Philippines as a baby and grew up in southern Rhode Island with his adoptive parents.

Beaming at how much their son loved drawing—and how seriously he took it—Anderson’s parents arranged for him to take painting lessons with Solace Loven, a local artist who taught him that “art could be something I do for the rest of my life.” For years, her studio provided the perfect place for exploring his creative talents and passions, which he continued to do in high school at Providence’s LaSalle Academy.

Anderson also took CE classes for young artists at RISD, learning from teachers who “spoke about art the same way my science teachers spoke about chemical reactions. I had never experienced that before.” The passion made him fantasize about studying at RISD after high school, which his parents fully encouraged despite the cost. “They told me, ‘If you get in, we’ll make it happen.’ And they did.”

Making an impact
Despite the art classes while growing up, Anderson realized during Foundation year that he hadn’t been “used to being taken seriously [as an artist] to the point where people will say bad things about your work.” Now, he fully understands the importance of critique to his creative growth. “What Foundation year does is knock down all the walls in your mind that you have set up to defend yourself against criticism. And by the time it’s over you’re able to just go for it.”

Discovering the Jewelry + Metalsmithing department just before needing to declare a major proved to be a happy accident. During Wintersession, Anderson planned to take an architecture course, but a registration error pointed him toward Intro to Jewelry instead—and by the end of the very first class, he was hooked. Now in his second year in the major, he has a new way to connect with his father, a metallurgist. “I call him in the middle of the night to ask him about working with specific metals. And watching him light up as he sees what I do [with metal in] an art context has been so great.”

Taking full advantage of the department’s expert faculty and drawing inspiration from the close-knit group of J+M majors, Anderson is growing ever more confident in his abilities—and with good reason. Last fall, for instance, an American Horror Story-inspired ring that he made and shared on Instagram caught the attention of a jeweler at Saks Fifth Avenue. Soon after, he got a call from Saks asking how they should measure Lady Gaga’s finger for the custom ring, which was ultimately presented to her at Super Bowl 50.

This year, in the wake of the tragic shooting in an Orlando nightclub in June, Anderson has also returned to the anti-bullying work he began in high school in response to being bullied as a teenager, which proved to be “the hot water that steeped the tea bag of my artistic endeavors….” Today, the social justice advocate is a sponsored speaker with the Matthew Shepard Foundation.

“RISD has instilled in me the belief that just because I’m making pretty things doesn’t mean that they are not also important things,” says Anderson, who is excited to delve deeper into his art making this year. “You spend more time learning than you do finishing [projects] in this major,” which perfectly aligns with his preference for process-based learning. “I wouldn’t want to do anything else.”

A New Vision for Wearable Tech

Alexandra Ju 16 JM recently presented her robotic jewelry work at an international conference in the Netherlands.

Starting Off with a Bang

Meghan (Cowan) Devinat 01 JM and Benoit Devinat BID 02 are juggling family life with getting their new business off the ground.