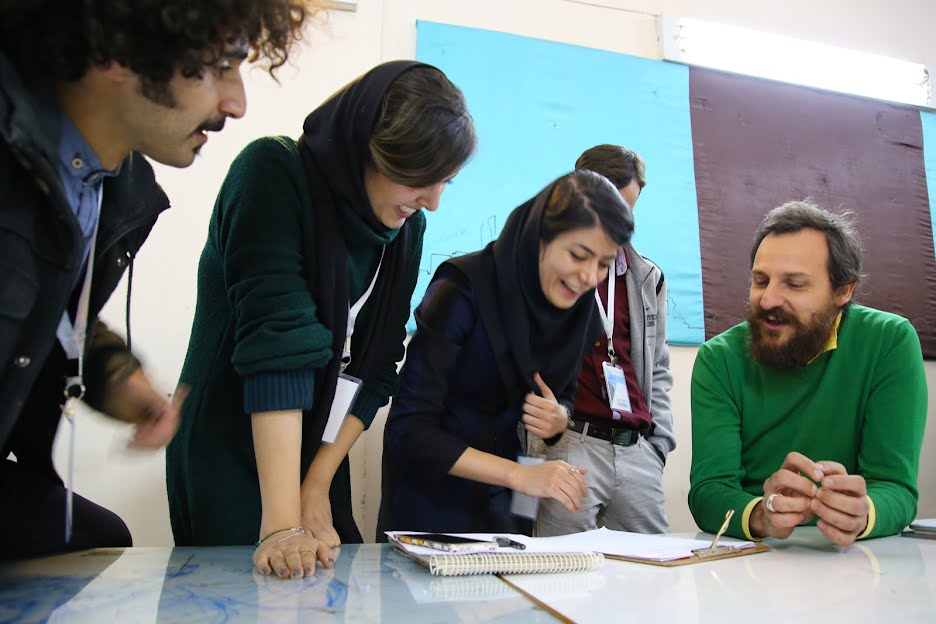 As the high-tech breakthroughs and entertainment emanating from Silicon Valley and Hollywood cross increasingly more international borders, so does a prevailingly western vision of progress—of how globalization will reshape our shared world. “We discount the fact that there are other visions of the future that come from different cultures,” notes Associate Professor of Industrial Design Paolo Cardini. In recognition of this, the Italian designer is spearheading a RISD-supported project called the Global Futures Lab, a series of international workshops aimed at articulating alternative versions of what’s to come—both utopian and dystopian—and that reflect local realities of non-western communities.

As the second recipient of RISD’s Global Faculty Fellowship (GFF), Cardini has already led workshops at the Art University of Isfahan in Iran and the National Institute of Design in Ahmedabad, India, with others forthcoming at Pontifica Universidad Catolica del Peru in Lima and Addis Ababa University in Ethiopia. In these four-day workshops the designer works with local students in developing “souvenirs from the futures”—artifacts inspired by student-written speculative fiction and then fabricated in cooperation with local artisans. Cardini plays the role of catalyst: he introduces a structure that allows participants to generate ideas and then encourages their realization in the form of tangible objects informed by students’ own cultural conditions and traditions.

“Projects like Paolo’s are taking RISD to places in the world where we have not typically worked in a sustained way,” says RISD Global Director Gwen Farrelly, who works with Academic Affairs to co-sponsor the GFF. Last year, as the program’s inaugural fellow, Assistant Professor of Literary Arts and Studies Avishek Ganguly conducted research into translation in global contexts and next year, as RISD’s 2017/18 fellow, Assistant Professor of Architecture Emanuel Admassu will launch a project titled Where is Africa? that engages architects, designers and artists across that continent in a series of dialogues.

The GFF is crucial in making global research and collaboration a major aspect of “what RISD’s academic program values,” says Farrelly. “Faculty and students are doing really significant work on the impact of intersections of globalization and the various fields represented here,” she continues. The GFF reinforces that by giving projects already in progress the support they need to “develop and live as fully as they should, and in close dialogue with peers and partners internationally.”

So far, Cardini reports, the workshops have inspired writing and objects that not only reflect local environments but also comment on issues students are facing in their everyday lives. For instance, a student in Isfahan made a mask/communication device for private social interactions, while students in India addressed cultural attitudes about homosexuality by speculating on the future of overpopulation. The designer, who also teaches Fiction and Discursive Design at RISD, believes that examining the present through the lens of science fiction allows students to explore controversial subject matter with less fear of judgment. “Speculating about the future makes you freer to consider the present,” he reasons.

After the upcoming workshops in Peru and Ethiopia, Cardini will continue as a fellow in 2017/18 and hopes that the Global Futures Lab will grow in its capacity to promote pluralistic values in imaginative and forward-thinking ways; among plans for sharing workshop outcomes is a Souvenirs from the Future traveling exhibition. Both Cardini and Farrelly recognize the heightened importance of programs like the GFF in today’s world. “We feel strongly that now more than ever we must lean in to support global engagement at RISD and beyond,” Farrelly says. “I think Paolo’s project really does that in that it engages us to listen, to learn and to collaborate with people in specific communities across the globe.”

For Cardini, the current situation of immigration crises worldwide and the rise of nationalist sentiment only amplifies his desire to connect with local communities in other cultures ignored by dominant narratives about globalization. “I hope to create more awareness of these [non-western] versions of the future,” he says, “because they are equally valid. It’s not just in Silicon Valley that the future is being built. It is being built everywhere.”