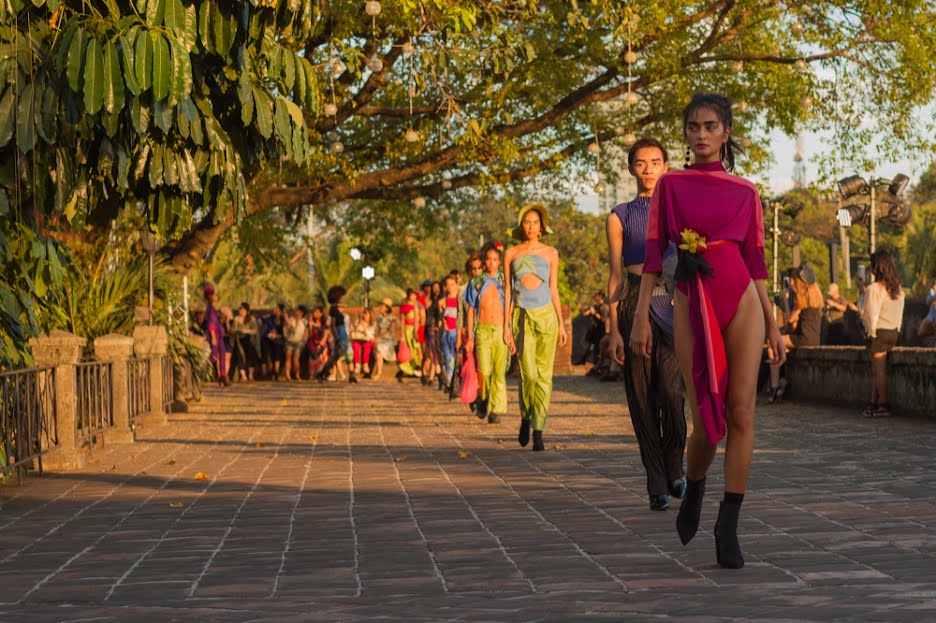 In February Rickard and Sicat presented the first Toqa collection at the inaugural Manila Biennale.

When Aiala Rickard 17 AP and Isabel Sicat BRDD 16 IL met at RISD four years ago, it was very much a matter of right place, right time, right person. A native of Oahu, HI, Rickard was shifting focus from photography to a major in Apparel Design just as Sicat, a Brown|RISD Dual Degree student from the Philippines, had begun an interdisciplinary concentration in the same department.

“Our friendship was initially based on the fact that we are both island girls,” they say, “and from there we found that our intelligences, aesthetics and personalities complement each other perfectly.”

Today that personal and creative bond is the driving force behind Toqa, the emerging apparel brand the artists founded earlier this year. For Sicat, who also studied political science at Brown, the idea of starting a fashion business took shape in 2016, while working on her thesis project in her home city of Manila. “The process of locally sourcing fabric, making patterns and refamiliarizing myself with the resources available in the city laid the foundation for something larger,” she says. So when Rickard graduated a year later, the duo reunited in Manila to launch a formal venture that aligns with both their ethical and aesthetic sensibilities.

A bold blend of casual chic and clubland cool made entirely from discarded fabric—or “deadstock”—the first Toqa line celebrates Filipino youth culture while eschewing clichéd tropes of “tropical” fashion and the perceived self-seriousness of sustainable apparel. Debuting in February at the inaugural, month-long Manila Biennale (which was spearheaded by RISD alum Carlos Celdran 96 PT), Toqa has drawn admirers to the dramatic cuts and colors of its clothing and to the designers’ cheeky sense of humor. (For some looks, Sicat and Rickard used fabric dyed with Tang, the classic powdered drink mix that remains popular in the Philippines.)

“The [Toqa] collection is more sporty than boho,” raves a reporter for Fashionista, “more sweat-it-out-on-the-dance-floor than white-girl-hashtagging-‘wanderlust’-on-Instagram.” A Dansk article cites them as among the leaders of an informal youth movement “keen on challenging the conventions” of the contemporary fashion scene.

In fact Rickard and Sicat see Toqa less as a fashion brand per se than as an “artistic commentary” on what they consider to be a very problematic industry. Because the effects of climate change are so visible in the places where they grew up, they invest heavily in sustainable design practices; and in basing each collection on the culture of a different island locale, they hope that Toqa can help disrupt the outsized influence of Western fashion cities on the industry.

Toward this end, debuting at the Biennale provided Toqa with an ideal way to attract global attention while also showcasing the Filipino roots of its first collection. “We wanted everyone at the show to experience the world we’ve been living in and conceptualizing,” the designers add, one “filled with saba chandeliers, capiz disco balls and a healthy dose of danceable music.” Thankful for the support of their sponsors and biennale collaborators, they believe the show went a long way toward meeting that goal. “It was a real reflection of the community and the Manila that we’ve come to know and the ways we’ve moved through it.”

Seeing Toqa as a “roving studio,” the designers plan to relocate to Honolulu for their next collection, which will draw from Rickard’s knowledge and experience of Oahu. “We don’t want to have a largely commercial venture,” they say, “but rather a finite number of pieces that speak to a particular place and moment in time.” Participating in fashion weeks in NYC, London or Paris is not on their agenda, nor is releasing new looks according to a standard, seasonal calendar. “We want to work outside the current infrastructure—both locally and internationally—and help to create a new one.”

Toronto-based apparel designer Peggy Sue Deaven-Smiltnieks 09 AP is showing how fashion can be a force for good.