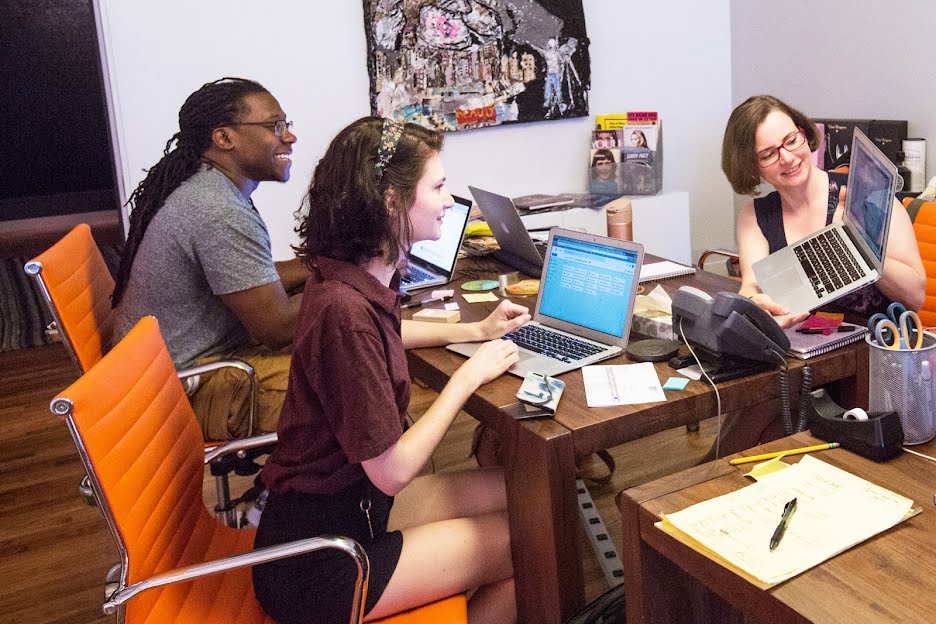 “Before this summer, working in television was a theoretical dream on the horizon,” says Sarah Novak-Sheward 19 FAV, who recently completed her first year as a Film/Animation/Video major. “But seeing shows come to life before my eyes makes it all seem accessible—like something I can actually do.”

The rising junior was thrilled to land a summer internship at Running Man, a post-production studio in NYC founded by alumna Ryan Cunningham 02 FAV. Having benefitted immeasurably from internship opportunities when she was a student, the accomplished producer is now committed to mentoring a RISD student intern every summer.

“I got to spend a lot of time working directly with Ryan,” Novak-Sheward confirms, “and she was great about giving me the big picture—explaining from beginning to end how the process works.”

But the most important takeaway was learning the importance of collaboration. “Up to this point, the projects I’ve done in FAV have been solo,” she notes. “But I know that in the next two years I’ll be working really closely with other students.” Cunningham concurs and points out that getting started in filmmaking and breaking into the television industry requires years of “working on a crew and learning how to collaborate.”

Novak-Sheward imagines that when she graduates from RISD she’ll move to either LA or NYC, so this summer the Indianapolis native was excited to get a taste of life as a New Yorker. A tip from a friend inspired her to apply for an inexpensive summer dorm room at NYU, which helped make the experience affordable.

For Novak-Sheward, working at Running Man also confirmed that she has selected the right major at RISD. As a first-year student, she had also considered majoring in Illustration because it also involves “art that carries a narrative.” But she ultimately opted for FAV because it’s so multifaceted and allows her to flex her writing muscles and work with a camera. “There are so many job options associated with FAV that it’s impossible to get bored,” she adds.

Novak-Sheward has yet to declare the film, animation or video track within the FAV department but is leaning toward live-action film. She’s also pursuing a Liberal Arts concentration (like a minor) in Literary Arts + Studies, which allows her to balance studio work with a heavy dose of creative writing.

“I was kind of intimidated when I started in FAV,” she recalls, “but it’s becoming more and more accessible thanks to people like Ryan and [Assistant Professor of FAV] Andrew Freiband 97 FAV. Andrew helped me to see that film is more than the typical blockbuster movie—that there is so much more you can do with a camera.”

Now that she’s back in Providence, Novak-Sheward is eager to begin her junior year and expand even further upon her understanding of both film and art. She hopes to round out her internship experience next summer with an on-set gig or a job handling props and costumes in a studio art department. But she suspects that it’s unlikely she’ll ever find an internship experience as rewarding as the one she just completed at Running Man.

“Ryan remembers what it’s like to be starting out in the industry and is serious about giving back,” she says. “She’s also committed to promoting the work of women in an industry that has been traditionally male.”

Indeed, the shows Running Man produces—including the hugely popular Inside Amy Schumer—are driven by women writers and directors, a fact that Novak-Sheward finds both empowering and encouraging. “When you look at the bigger picture,” she notes, “it’s still hard for women to get top directing jobs. But Ryan is really doing her part to change that.”