For the past decade, Katie Salen MFA 92 GD has been playing and designing games, employing everything from giant inflatable game pieces to karaoke ice cream trucks to transform her theories of gaming into powerful tools for innovation and learning. 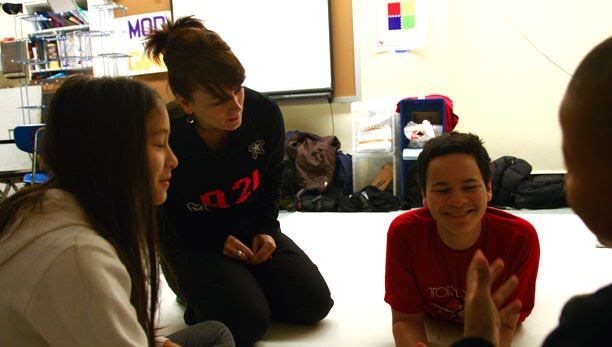 For the past decade, Katie Salen MFA 92 GD has been playing and designing games, employing everything from giant inflatable game pieces to karaoke ice cream trucks to transform her theories of gaming into powerful tools for innovation and learning.

This year, to honor her relentless drive to spark social change through the complex systems of games, the RISD Alumni Council has selected Salen as the recipient of theAlumni Association’s 2011 Art and Education Award. The award, which recognizes excellence and innovation in education, will be presented atRISD’s Commencement ceremony on June 4.

In an interview with the alumni magazineRISD XYZ, Salen said she couldn’t have predicted how her journey into gaming would unfold. She just knew that she loved playing and designing games – analog board games like Scrabble, large-scale productions like the citywide Big Urban Game she designed for 7,000 residents of Minneapolis-St. Paul, and of course, digital games. “I became fascinated with the way that video games construct worlds – that from nothing they literally start to create a kind of logic and a coherence to what you can do in that space, through the design of rules.” And as a designer, she adds, “games have become a tool to help me figure out how to design things that aren’t games.”

Salen’s gaming expertise led to the seminal gaming design bookRules of Play, which she co-authored, and to teaching positions at MIT and Parsons, where she now works. It also inspired her to found theInstitute of Play, a nonprofit that stakes it claim on the idea that gamer intelligence can not only promote vital 21st-century skills, but also make us better risk-takers, problem-solvers, collaborators and engaged citizens.

In 2009 the Institute of Play launched its boldest venture yet:Quest2Learn, a New York City public school organized around gaming principles and digital culture. Since then, Salen’s radical model for what a school can be has commanded the attention of politicians, teachers, philanthropists and educational reform advocates across the political spectrum. “Katie brings to the table a deep knowledge – probably more knowledge than anyone in the country – of games and their ramifications for learning,” notesRobert Hughes, president of New Visions for Public Schools in New York. With $1.1 million in funding from The John D. and Catherine T. MacArthur Foundation and a $2.6 million grant The Bill and Melinda Gates Foundation announced last year, Quest2Learn is changing the conversation about how a nation’s failing education system can reach a generation of digital kids.