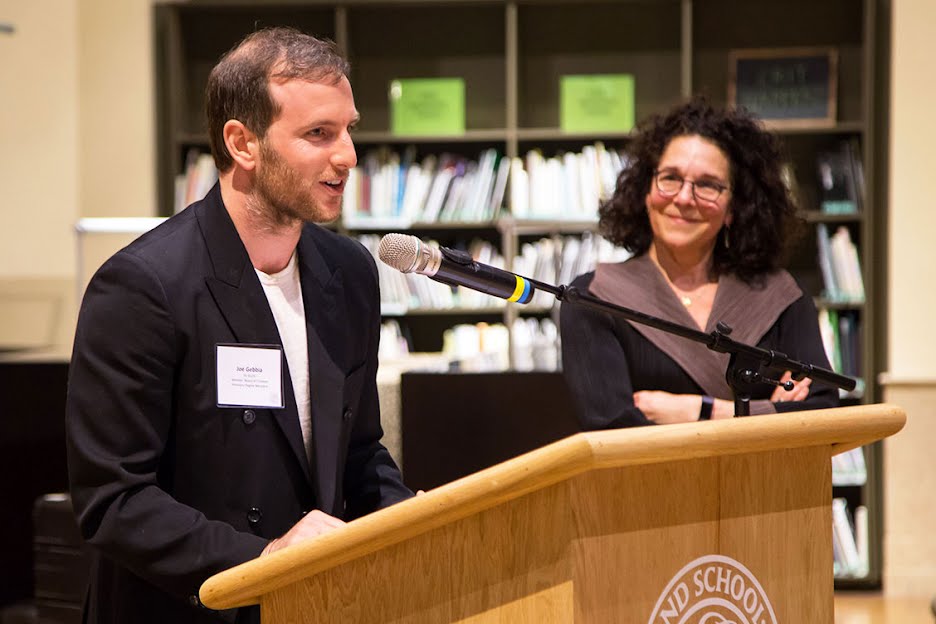 After RISD trustee and new honorary degree recipient Joe Gebbia 05 GD/ID finished celebrating with the Class of 2017, he stayed on in Rhode Island to speak with local business and educational leaders.

When Airbnb cofounder Joe Gebbia 05 GD/ID visited Rhode Island at the beginning of June, he packed a lot into his whirlwind visit. Top on his agenda was attending RISD’s Commencement ceremony and related festivities to celebrate the Class of 2017 and collect another degree himself—this time an honorary Doctorate of Fine Arts for being such an effective ambassador for design education and leading a global community marketplace that is changing the way people connect with each other across cultures.

Gebbia also extended his visit to the Ocean State to attend an Economic Outlook Luncheon on Monday, June 5 hosted by the Greater Providence Chamber of Commerce. As the featured speaker, he participated in an open conversation with RI Governor Gina Raimondo and Chamber of Commerce President Laurie White on issues of particular interest to the state’s business, educational and community leaders.

In graciously introducing Gebbia, President Rosanne Somerson 76 ID noted that Rhode Island has good reason to reclaim its past as a center for innovation—one dating back to the 19th-century Industrial Revolution. She pointed out that he and Airbnb cofounder Brian Chesky 04 ID, who also received an honorary degree and delivered the keynote address at Commencement, embody the RISD ethos of risk-taking, experimentation and process-based problem solving.

During the 45-minute discussion with the governor and Chamber director, Gebbia pointed out that in launching Airbnb in 2008 he and his partners “didn’t invent anything new.” Instead, they focused on solving a very tangible problem (how to meet their own suddenly increased rent in San Francisco) using the kind of thinking they had learned at RISD. “What RISD teaches so well,” Gebbia said, “is to see two existing things that can be recombined in different ways.”

As the panelists spoke about the rise of the sharing economy and what the future holds with millennials forming the core of the workforce, Raimondo also asked Gebbia—who is the company’s chief product officer and leads its humanitarian efforts – to speak about Airbnb’s growing influence in this realm. Specifically, she wondered about the impact on business of coming out so forcefully against President Trump’s initial “Muslim ban” in January.

Gebbia responded by saying that the company first created its “disaster platform” in 2012—in the wake of Hurricane Sandy. Doing this sort of work is totally in line with Airbnb’s “core competencies” of providing short-term housing and creating trust among its community of users, he says.

And in response to Governor Raimondo’s question about how Airbnb attracts and retains a strong group of committed employees who are largely from his own generation, Gebbia pointed out that “millennials want meaning” in the work they do—they want to share in the same positive vision he and his partners have for a future in which everyone feels at home.

Offering a tempting taste of the Career Center’s Mindshare event this Saturday, Joe Gebbia 05 ID/GD spoke at RISD last week – about why he’s a bona fide “designtrepreneur,” as he likes to put it.