Taking chances in and out of the studio is opening doors for graduating Illustration major Zharia Shinn 18 IL. 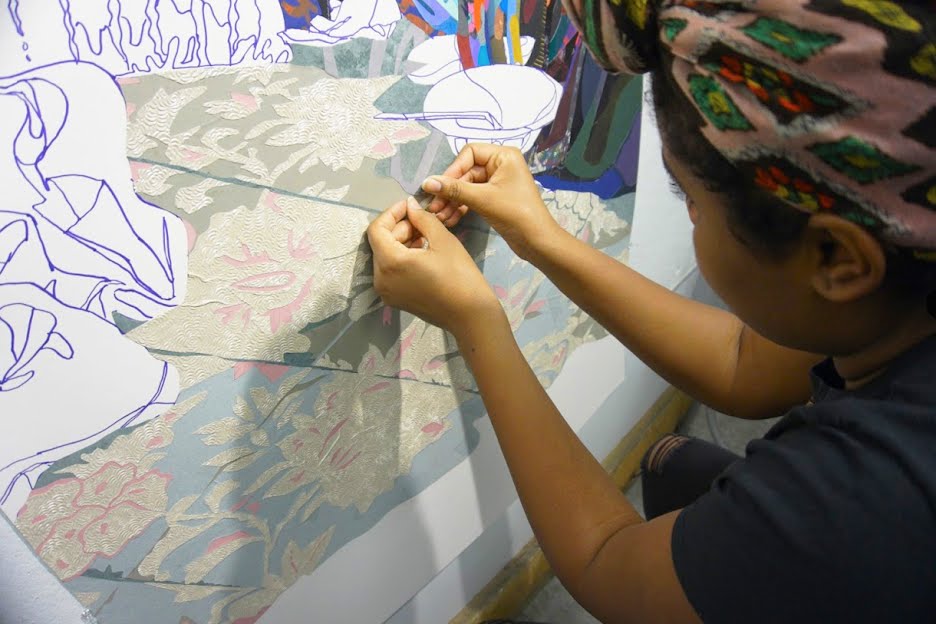 Growing up in Florida and California, senior Zharia Shinn 18 IL was “that weird art kid who was always drawing.” Although she loved learning, she didn’t see herself as an integral part of her high school community—unlike, say, her twin brother, the consummate track star. When she arrived at RISD four years ago as a first-year student, Shinn knew immediately that she’d made the right choice. “I was like, this is it,” she recalls. “I felt so blessed to be in this space.”

Shinn describes herself as something of a “scaredy-cat” but has learned to overcome her fears and insecurities and cut her own path as an artist. “Suddenly being surrounded by other art kids as a freshman was something of a culture shock,” she recalls. “It was definitely intimidating.”

Experimental and Foundation Studies professors advised her to be looser in her approach—to take chances in the studio rather than striving for perfection. “When I start a project, I’m still afraid at first, but I work through it,” says Shinn. “Trying lots of different mediums has been so helpful—even when I fail. I don’t let fear stop me, but let that be the first step.”

After deciding to major in Illustration, the support Shinn has gotten from friends and teachers in the department has been invaluable, she says. Sophomore year she stumbled upon collage in a class taught by Professor Judy Sue Goodwin Sturges 66 IL and continues to find inspiration and joy in the process. “I remember Judy Sue saying, ‘I don’t know what this is, but keep going,’” the artist recalls. “That really stuck with me.”

At first Shinn would create textured portraits out of paper, textiles and found imagery, but she has since developed a parallel process in the digital realm using Photoshop. “I have a passion for making work about people of color—people who look like me,” she says. “I’m inspired by black culture, children’s books, music and fellow collage artists.” Shinn was stunned and “humbled” when AfroPunk—a piece she created as a junior—earned a $1,000 Gold Award in the Illustration West 56 competition organized by the Society of Illustrators of Los Angeles (SILA).

The women in her family have also begun to show up in Shinn’s work. “My family is so important to me,” she says. She is currently working on a huge collage of her great-grandmother based on a photograph she took during a recent trip home. At 5 feet by 30 inches, it’s the largest paper collage she has created to date and is making its debut at the Senior Invitational exhibition at Woods-Gerry Gallery from June 1–3.

“I’m so excited about the show,” Shinn exclaims, adding that she has also been invited to take part in Go West!, an exhibition of American illustration that will be on view from June 19 through October 7 at the designforum in Vienna, Austria. Curated by Canadian artist Peter Diamond, the show will also feature work by current RISD faculty members and such recent alumni as Armando Veve 11 IL and Victo Ngai 10 IL.

Shinn is planning to travel to Europe for the opening in June. “I didn’t travel much as a student and have never left the country before,” she says. “That’s really my only regret.”

Plans beyond summer travels are still vague at this point, but Shinn is considering relocating to New York with RISD friends and imagines that she’ll get around to graduate school and maybe teaching in the future. And she’s especially proud to be the first member of her family to earn a degree in a creative field.

“RISD wasn’t easy,” Shinn concludes, “but being a part of this community has been amazing. I definitely found my tribe here. I found my people.”

Carving a Personal Path at RISD