Speculations on the Posthuman Age 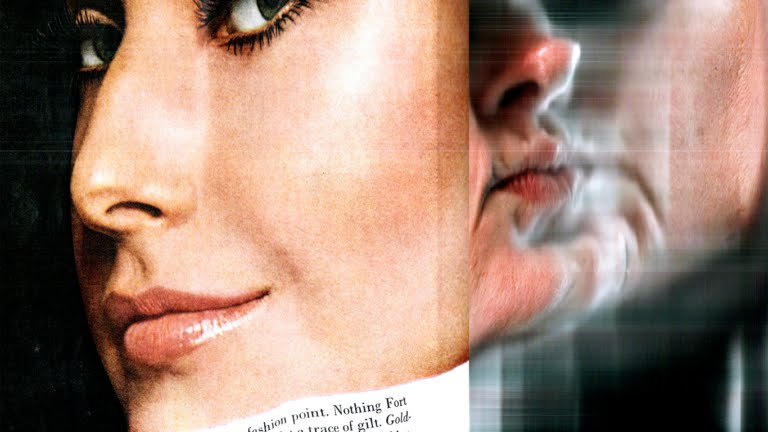 In her series unexpected intrusion, recently appointed Assistant Professor Anastasiia Raina digitally grafts fashion photography with images of herself pressed against glass to undermine the illusion of “perfection.”

Since discovering the medium of graphic design soon after arriving in the US in 2006, Ukranian-born artist Anastasiia Raina has ambitiously reimagined design practice through the lens of posthumanism—a body of thought that addresses (among many other things) the blurring of boundaries between human beings and advanced technologies. Now a full-time faculty member in the Graphic Design department, she is interjecting radical provocations into the curriculum.

Here Raina discusses her theoretical approach to practice and how it influences her work with RISD students.

How did you get started in graphic design?
My path to graphic design has actually been a meandering one. First I worked as a photojournalist in Ukraine and, during the 2004 Orange Revolution, experienced firsthand the powerful role images play in shaping competing narratives.

After moving to the US, it was right around the 2008 financial crisis and I had to look for ways to make ends meet. When I found advertisements for graphic design jobs—something I had no prior exposure to—I enrolled in classes and started pretending to be a graphic designer, taking on client projects and spending a lot of sleepless nights figuring things out while still doing photography outside of that. Much later I was able to combine the two.

When did theory and research become a major part of your process?
After working at a marketing and design agency in Los Angeles for more than six years, I realized I was ready to explore design outside the commercial realm.

I had the good fortune of working with a wonderful art professor at California State University/Long Beach—a photographer named Rebecca Sittler. Together we started the Institute for Inverted Histories, an art practice that collects and reconfigures pieces of the historical media landscape.

Then as a graduate student at Yale, I began incorporating the revolutionary fields of biotechnology and genetics into the design vernacular. This took me to a biogenetics lab, where I worked on a number of projects—including translating the text of my master's thesis into a unique nucleic acid fingerprint, or DNA.

By reverse-engineering the process that creates organisms for genetic code, I designed a set of synthetic genes representative of each chapter of the thesis. In doing so, I conceived of my thesis book as a continuously evolving being, using the biotechnological matter of chemicals and encoded genetic information to represent it.

Much of your work addresses the intersection of science and politics, but do you approach biopolitics in critical theorist Michel Foucault’s sense of it—how governments exert power in relation to human bodies?
The impact of biopolitics on human bodies is much more than an abstract idea for me. For centuries Ukraine has been—and remains today—a battleground for colonizing forces from every direction.

In the last century alone, Ukrainians have lived through World Wars I and II, enforced famines, communism, the Cold War, Chernobyl and now a civil war in Donbas. Biopolitics, geopolitics and eco-disasters have shaped our bodies and their relationship to the geography we inhabit.

As a child—having spent most of my days at the Rehabilitation Research Institute for the Disabled in Vinnytsia, where my mother works—I saw people whose bodies have been directly impacted by war in the form of traumas or amputations. I naively thought that the victims of physical violence were at the hospital to regenerate their body parts.

Now I'm in conversation with scientists who study the axolotl, an organism from which they hope to learn how we might endow ourselves with regenerative capabilities.

In addition to tissue regeneration, there are a number of ways in which scientific breakthroughs are going to fundamentally alter our understanding of what it means to be human, whether it be through a materialist deconstruction of brain neuroscience or through the alteration of the genetic code by means of emerging technologies like the gene-editing tool CRISPR.

As the recent arrest of He Jiankui (the Chinese doctor who illegally edited the genome of human embryos) demonstrates, governments and public policy will play a fundamental role in determining the scope of these scientific and technological breakthroughs, in terms both of funding and regulation. For artists this becomes a new area for intervention and critique.

We live at a time when what was once science fiction is incredibly close to becoming reality. I’m excited to not only be witnessing this epochal transition, but also to reflect on it through my work and hopefully help give it wider cultural currency.

What do you want to work on—and work through—with students?
RISD offers a unique set of courses that keep pace with socioeconomic and political developments. With unique resources such as the Nature Lab, we are quickly becoming an epicenter for studies in bio art, biodesign and sustainability.

I want to leverage the tremendous talent and resources here for interdepartmental and institutional efforts at the intersection of art, design bio- and information technology with a focus on understanding their role as instruments of social change.

In terms of contemporary pedagogy, I think studios that I teach—like Design in the Posthuman Age and the Interspecies Collaborations studio I'm teaching with David Kim MFA 14 DM—can help students move beyond the traditional understanding of art and design.

There is a tectonic shift underway, but the field continues to lack exposure to the critical discourse that exists within historically marginalized communities. I believe that this needs to change.

I want students to develop a speculative way of thinking that allows them to move away from a solutions-based design practice toward more nonlinear abstraction. This leads to modes of inquiry that I believe are necessary to address the antagonisms and anxieties of our contemporary condition.

How can posthumanist theories and concepts change the way graphic designers approach the field?
Posthumanist philosophy can help us rethink modernist ideals and decenter and redefine the existing canon. In order to accomplish this, we must lean heavily on gender and queer theory as well as postcolonial histories to incorporate previously disempowered points of view.

N. Katherine Hayles’ notion of technogenesis—our co-evolution with tools and technology—is deeply ingrained in the design practice. Since the 19th century, designers have been at the forefront of discussions about the automation of labor and emerging technology.

For designers, merging scientific inquiry with design research gives us the ability to develop new and better metaphors for understanding and communicating complex information. And by directly interfacing with the extraordinary revolution underway in information technology and biotechnology, we begin to understand our place in the universe more fundamentally, which will help us navigate the posthuman epoch that lies ahead.

So how are you using posthuman theory to rethink the discipline?
To give you a concrete example, one of my assignments based on philosopher Thomas Nagel's paper What it’s like to be a bat? asks students to experience the world from the perspective of a nonhuman organism or an algorithmic form of intelligence and then embody, document and recreate formal principles of graphic design from this newly acquired vantage point.

For another formal exercise at the Nature Lab, students were asked to generate shapes from microscopic histological specimens and then select the most viable ones to “breed” new shapes through crossover and mutation.

This generative method allows for an infinity of formal configurations, allowing students to create libraries of forms from which typefaces, books, posters, videos and interactive multimedia pieces emerged.

The cutting edge of biological and technological research is increasingly diminishing the primacy that human beings have been afforded in the natural world. When we make a leap and attempt to embody nonhuman perspectives, we recognize our inability to escape human-centrism. And this failure doesn’t give us the space and possibility to imagine other kinds of intelligence completely different from our own.

What are your impressions of RISD and Providence since you arrived last fall?
Honestly, I keep pinching myself because I’m now among people I’ve respected and looked up to for a very long time.

There’s already a strong sense of a creative community and intellectual rigor here—I try only to be a facilitator. I’ve never come across people like RISD students. They have such an intensity, rigor and ability to be prolific with their work. They blow my mind every single day.