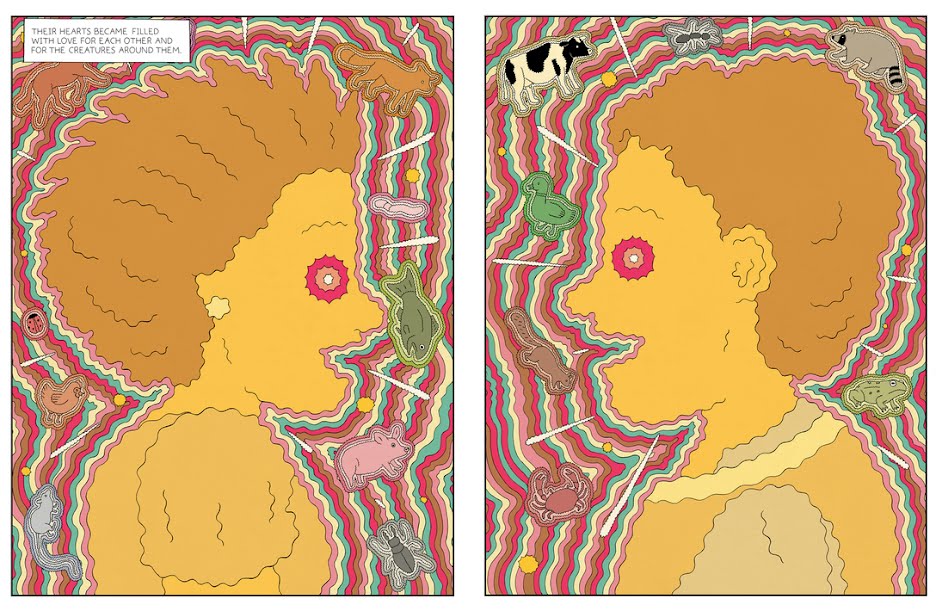 A trippy spread from The White Snake, a new graphic novel by Ben Nadler 13 IL based on a classic Grimm fairy tale.

Writer, illustrator and comics artist Ben Nadler 13 IL credits Illustration faculty member Paul Karasik with really igniting his passion for comics shortly after he arrived at RISD a decade ago.

So he had no hesitation when Françoise Mouly, the art director at The New Yorker and his editor at TOON Books, suggested that he enlist Karasik’s help in adapting a classic Grimm fairytale for his new book The White Snake (TOON, 2019).

“Working with Paul and Françoise definitely made me a better writer and a more thoughtful storyteller,” says Nadler. In April he returned to RISD to serve as a guest critic in Karasik’s course Comix: Words and Pictures Mixed Together and offer current students advice and encouragement—along with signed copies of his new book.

“Ben described his working process, which is basically the method he learned in my class,” says Karasik—“as a methodical approach to developing a comic from concept through thumbnails, sketches and finally, beautiful drawings. He made it clear that what students are learning in class now will be 100% applicable to their work after graduation.”

Karasik met Mouly years ago when he served as associate editor at RAW Magazine, the seminal comics review she edited with her husband, cartoonist Art Spiegelman, from 1980­–91. “When she heard that Ben had been a student of mine, she invited me to guest-edit his new book,” Karasik explains.

The White Snake takes a feminist (and lighthearted) approach to the original fairy tale, encouraging young readers to treat animals and other people with kindness and respect. Kirkus Reviews describes the book as “fresh and multiethnic” and praises Nadler for transforming Princess Tilda “from a prize-to-be-won supporting character into an adept and capable ruler who directly challenges her father’s outdated belief that a woman is incapable of wielding power well.”

The book—Nadler’s second graphic novel—features colorful and detailed illustrations, including a trippy spread after characters bite into a magic apple. “The more fun I have drawing it, the more fun someone is going to have reading it,” reasons Nadler.

Students were inspired by Nadler’s dedication to his craft. “He made it clear that making graphic novels is hard, time-consuming work,” says Karasik, “but there is no greater pleasure in the world than doing the work and getting your first boxful of books back from the printer.”

Now that The White Snake has been released, Nadler is focusing on his next book project—a science fiction graphic novel. And earlier this month, he shared his annual comics anthology with fans at the Chicago Alternative Comics Expo (CAKE) in the city he now calls home.

“The anthology is a great way to get crazy or stupid ideas out of my head and put them down on paper,” Nadler says. “It helps me to reboot my brain, and it’s also lots of fun.”