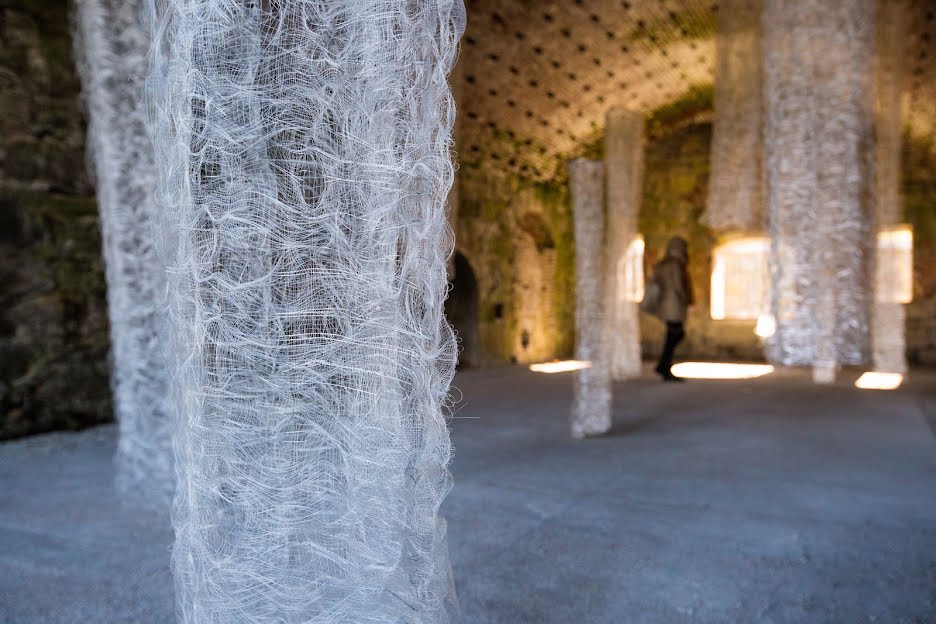 Minhee Kang 17 TX hung 12 iridescent woven columns that shimmered and shifted in the breeze in remembrance of a dozen soldiers who once lived in the fort’s barracks.

Built in 1799 to defend the mouth of Narragansett Bay, Fort Adams once served as a training ground and home to generations of soldiers in Newport, RI. Now a state park, it became the catalyst for an inspiring interdisciplinary course this fall that revealed both the challenges and rewards of learning beyond the studio.

Sancomb first conceived of the idea when touring the Fort Adams site during the research phase of a design/build project. “I was struck by the architecture, scale and sense of time of the fort,“ he says, “and just kept thinking, ‘what an amazing place for art installations.’ It was clear that it could be an opportunity for students to learn through site-specific installation work while also gaining professional development and real-world experiences as artists.”

The resulting collaborative endeavor connected students not only with guest critics, but also with materials vendors, local historians and Fort Adams historians and guides Steve Marino and Rob McCormack, who provided valuable context for developing highly conceptual projects with diverse points of departure. “We draw parallels between the multitudinous history of Fort Adams and contemporary issues, engaging with themes such as property ownership, femininity, environmental consciousness, violence [and more],” students proclaim in the exhibition notes, which they co-wrote with guidance from Jen Liese, director of the RISD Writing Center. “Like history, our work is not limited to just one reading.”

For collaborators Malaika Temba 18 TX and Charlie Ehrenfried 18 SC, the sheer scale of the site served as a starting point. “On one of the first days we were given the chance to explore on our own,” says Temba, “Charlie and I ended up being interested in the same spot [the lawn just outside the Northern Gate]. We were impressed by the physical space and knew we wanted to use this opportunity to make something big...like really big.” After looking more closely at how the site had been used historically—as Narragansett tribal land and on a former slave trade route—they used fabric colored with traditional tribal dyes to make a subversive piece that spells out the word “land” when viewed from above.

In an empty barracks worn by weather and age, Vanessa Nieto Romero MFA 17 PR was drawn to what seemed missing. “There were two moments I responded to in the process of making this installation,” she says. “One was the emotional and visceral reactions I experienced the first time I noticed the gaps in the walls. The other was more rational, trying to research and collect enough information to understand how women’s presence was evident in this place.”

Her piece I Desire You Remember the Ladies combined performance and a sculptural installation to draw lines between the early feminist vision of Abigail Adams—wife of Fort Adams” namesake John—and the forgotten labors of the wives of troops stationed at the fort.

While some students made work that attempted to reveal, others took advantage of the fort’s propensity to obscure. After settling on the “listening tunnels” as her preferred site, Ariana Martinez BRDD 17 SC created Reverberations, a video installation featuring audio loops of moments of 20th- and 21st-century paranoia regarding the rise of the surveillance state.

“The opportunity to make site-specific work taught me the importance of understanding the ways in which site conditions can motivate—but also limit—the execution of a particular work,” says Martinez. “I had imagined the ideal sensory experience of its finished form, but I had to make many compromises due to on-site technical constraints such as the lack of electricity and the cold weather conditions (both of which limited what kinds of audio/video equipment I could use). I also learned that doing work in the public sphere requires you, as the artist, to be flexible in your hopes for how an audience will receive your work.”

Like Martinez, other students were hungry for responses from an audience markedly different from the kind they normally encounter on campus. “Since arriving at RISD,” says Nathan Miller MFA 17 PH, “I’ve wanted my work to… expand and adapt outside of a traditional white cube or gallery setting… to speak to a broader audience and physically address underlying histories that exist outside of white walls. The fort was an amazing opportunity to do just that.” For the exhibition, Miller combined video footage of everyday acts of violence with a maze of large-scale photographs of baptism and then sang a gospel hymn in the architecturally and acoustically evocative location known as the “Western Casemate.”

Beyond the clear impact of the experience on students, Marino—one of the Fort Adams guides—says it was transformative for him as well. “I’ve been familiar with RISD for the past 40 years so I wasn’t surprised by the talent, energy and commitment of the students and professors,” he says. “What surprised me was how the artwork inspired and informed my connection with the fort. I’ve been working at Fort Adams for over eight years, yet spaces and narratives that came to life during the exhibition will forever change my interpretation of the fort and, consequently, the tours I give.”