Hats Off to Foundation Students

More than a dozen Foundation students mixed and mingled at the opening of the 2012 Foundation Studies Triennial Exhibition at Woods-Gerry Gallery wearing the “extreme” hats they completed just last month. 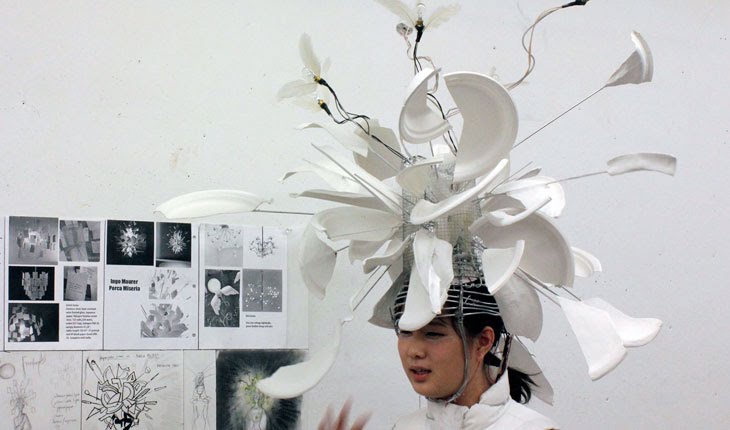 More than a dozen Foundation students mixed and mingled at the opening of the 2012 Foundation Studies Triennial Exhibition at Woods-Gerry Gallery wearing the “extreme” hats they completed just last month. Two of the HAT PROJECTS are also installed in the entrance gallery, anchoring the show itself.

Assistant Professor Wendy Seller 75 AE assigned the new project as the culmination of her fall Spatial Dynamics studio, one of the triumvirate of studio courses all Foundation students take the first year (along with Drawing and Design). Inspired by Savage Beauty, the over-the-top Alexander McQueen exhibition at New York’s Metropolitan Museum last summer, she asked the 42 students in both of her studios to not only design a hat, but to create “a structurally sound, wearable HAT form that takes design to the extreme.” Each piece is inspired by an established artist or designer of the student’s choice.

“Since the late ’90s, I have been assigning a BODYWEAR PROJECT as my final assignment of the term when teaching Spatial Dynamics,” Seller says. This year, as always, she added enough parameters and nuances to the assignment to make it suitably rigorous. “Their challenge was to combine sculptural design with digital media,” she explains. To that end, graduate student Evelyn Eastmond MFA 12 DM collaborated with students in both of Seller’s sections by helping one group to learn enough basic digital electronics that their hats could light up in some fashion and the other to explore projected light, which adds an environmental element to the three-dimensional creations.

Seller also challenged students to work with a broad range of sculptural mediums and to fully extend their designs from head to torso, if desired. And she insisted that when worn the head-gear would partially or totally conceal the wearer’s eyes, “so as not to distract the viewer from the sculptural work.” At the final crit, students had to wear their HATS while explaining their design process.

All in all, the outcomes are as astonishing and satisfying as so much of the other work in the Triennial, which features a sampling of the best student work created in Foundation Studies during the 2011 spring and fall semesters. As co-chairs of the exhibition, Seller and fellow Foundation Professor Ken Horii organized the show around the theme of Process. They’ve included notebooks in each gallery with faculty comments on the work being shown and note that this Triennial includes considerably more digital media than in the past, with several professors presenting student work solely through digital means. In addition, Assistant Professor Shawn Greenlee 96 PR – the division’s resident “digital guru” – has compiled three rotating digital presentations on students’ works-in-progress.

The Triennial continues through January 22 at Woods-Gerry Gallery.