“I knew I had to break up with Ann Rosenberg after she chose a teal dress for the prom. 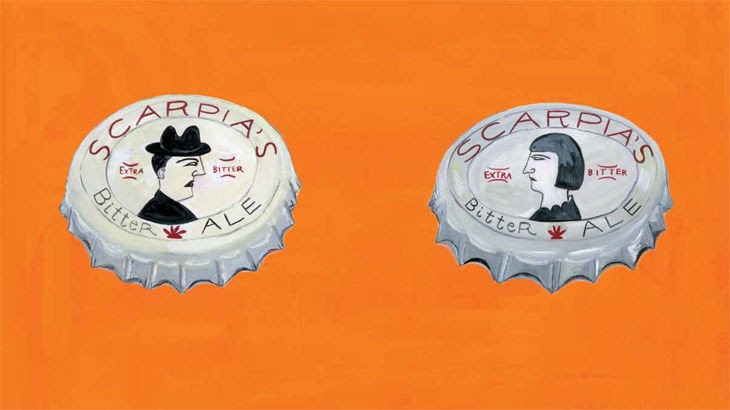 “I knew I had to break up with Ann Rosenberg after she chose a teal dress for the prom. I had never heard of teal. Also, I was gay,” writes author/illustrator Brian Selznick 88 IL on the back cover of Why We Broke Up by author Daniel Handler and illustrator Maira Kalman, who spoke at RISD last week.

Why We Broke Up, the cover of which forgoes the usual accolades for stories of literary celebrity breakups, is itself both the story of a breakup (that of high school students Ed and Min) and one of collaboration. Handler, who also writes under the name Lemony Snicket, is author of the 13-volumeSeries of Unfortunate Events, while Kalman is best known for her contributions to TheNew Yorker (including the knock-out “New Yorkistan” cover from 2001) as well as her many children’s books. The event, sponsored by RISD's Division of Fine Arts, brought the two storytellers to RISD to talk about their creative process with high school participants in RISD’s Project Open Door after-school program and the RISD Museum teen program, as well as the broader RISD community.

“You don’t want to get published,” Handler advised a student who asked for tips on launching a literary career. “Just be a writer first. Read things you love over and over again and steal as much as you can. Also, read lots of poetry, even if you don’t want to be a poet.”

Even before embarking on 13 Words, their first book together (Why We Broke Up is their second), Kalman would send Handler a picture she drew or found and he would write a micro-story about it, and send it back. Though Handler and Kalman live on opposite coasts, their easy rapport, deadpan humor and shared love of Nabokov felt like, “two people who are having a conversation about everything in the world.”

For this project, Handler asked Kalman what she’d like to paint. When she showed him pictures of small ordinary objects – combs, onion rings, ticket stubs and other ephemera – he built a storyline around them. In the book, Min gives Ed a box containing artifacts from their relationship – bottle caps, movie stubs and a protractor – accompanied by a long, book-length letter explaining why they broke up.

“A lot of the images came first,” says Kalman. “I think of myself as a wandering journalist. I jot down exactly what I see during the day that is really funny, really sad or both. In this book, the dialogue of humor and heartbreak is contained both in images and in words. We’re heartbroken and happy every 5 seconds.”

The authors are collecting more stories of heartbreak at their website, the Why We Broke Up Project. As the back cover notes, “Min and Ed’s story of heartbreak may remind you of your own.”