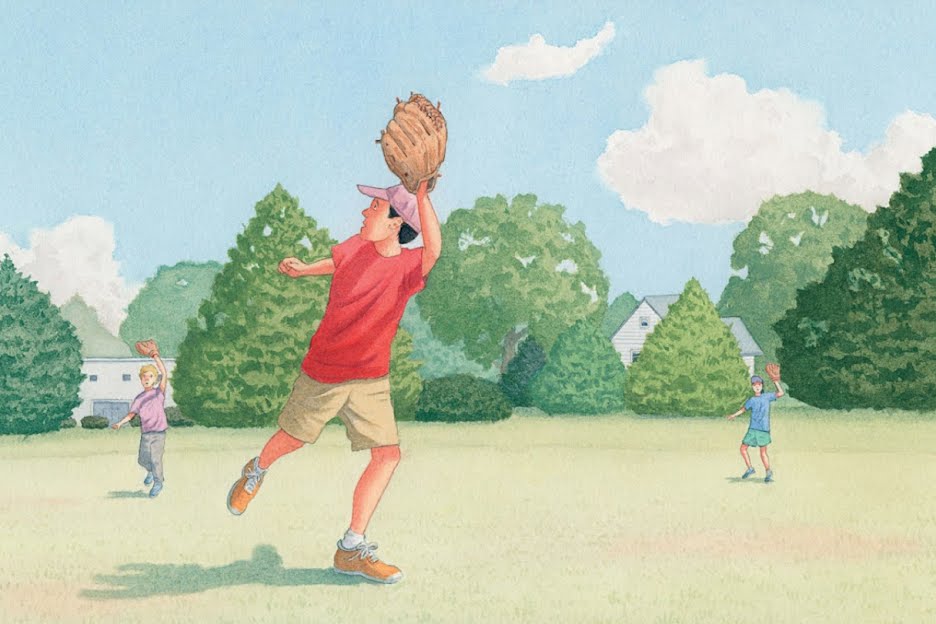 Three-time Caldecott Medal winner David Wiesner 78 IL knocks it out of the park again in I Got It!, released by Clarion Books in April—just as kids and parents around the country returned to the field for the age-old American ritual of spring baseball games.

Wordless except for the shout-out in the title, I Got It! offers a wonderful story that conveys all the inner drama of an outfield catch in an intense, imaginative, moment-by-moment replay. Before he even landed on where to set the story, Wiesner knew that he wanted the book to capture an idea he first noticed as a child: “In your mind, there can be this very long, elaborate narrative happening that outside in the real world may take mere seconds.” Recalling the interminable moments of suspense waiting in the outfield to catch a ball (or not), he knew he’d found the right situation to play out that inner monologue.

“Like all of my books, it started in a sketchbook with thumbnail drawings,” Wiesner explains (see video below). In trying to figure out how best to tell the story in 32 pages of pictures, he repeatedly makes “lots of little scribbles”—over and over. “Slowly but surely I get a sense of who the character is and the book begins to take shape,” he explains.

The scenes in I Got It! toggle between real and imagined as the anxious young outfielder at the heart of the story envisions “ever-increasing scenarios of all the horrible things that could go wrong.” Wiesner plays up the contrast between fantasy and reality with alternating approaches to painting—crisp acrylic and gouache for the scenes offering a more realistic take on the action as opposed to looser watercolor when conveying the inner turmoil of the boy who’s trying to catch the ball.

As with his best pure picture books, Wiesner manages to tweak out the extraordinary in the ordinary. “Surely even capable athletes will relate to the interplay between body and mind, muscle and emotion, which I Got It! captures with beauty, fluidity, wit and suspense,” notes Bruce Handy in The New York Times. “Like René Magritte, Wiesner has a precise and realistic style that makes his leaps into the weird all the more effective….”

Leveraging the latest technology, award-winning author/illustrator David Wiesner 78 IL allows readers to explore the story of Spot by following their own path.

New Assistant Professor of Illustration Calef Brown finds inspiration for his playful drawings in the rhythms of music and conversation.