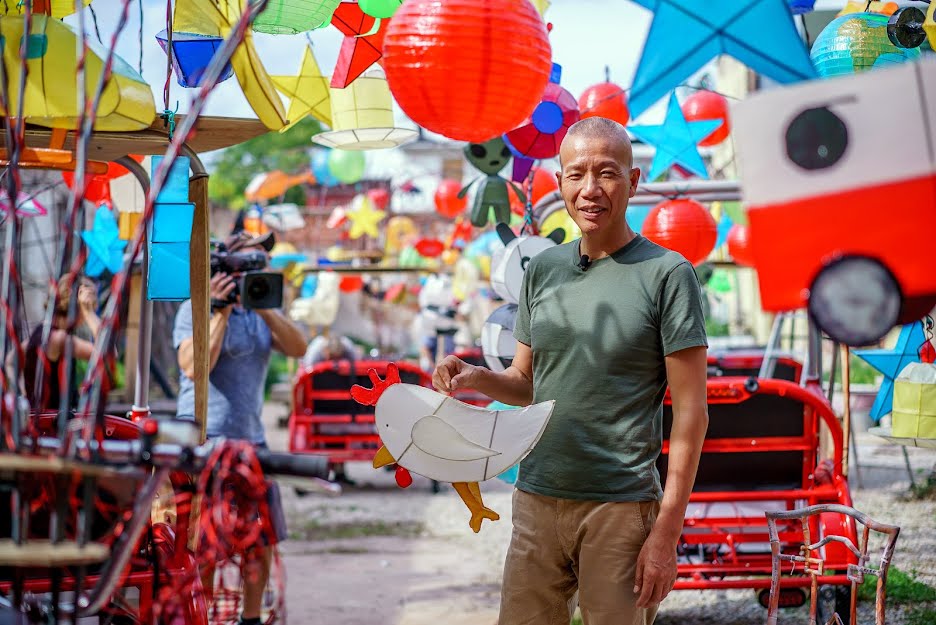 Fireflies—Cai Guo-Qiang’s largest US public art project in a decade—debuted last fall in Philadelphia and was on view during this month's Light City festival in Baltimore, MD.

RISD graduate David Hanson 96 FAV, founder and CEO of Hanson Robotics, will deliver the keynote address at Commencement 2018, where he will also receive the Alumni Award for Artistic Achievement in recognition of his pioneering work in the field of artificial intelligence.

In celebrating the 650-plus students who will earn their undergraduate and graduate degrees from RISD on Saturday, June 2, Hanson will be joined by multidisciplinary artist Cai Guo-Qiang and renowned photographer Annie Leibovitz, both of whom will accept honorary degrees at the festive ceremony at the Rhode Island Convention Center.

Hanson is known worldwide for developing robotic assistants with such human characteristics as warmth and empathy. Currently based in Hong Kong, he leads a team of roboticists, engineers and AI experts in building “genius machines” expected to make an impact for their wisdom, creativity and compassion.

With a BFA in Film/Animation/Video and a PhD in interactive arts and engineering from the University of Texas at Dallas, Hanson has received much mass media and public acclaim for one-of-a-kind robots like Sophia, who was named the world’s first United Nations Innovation Champion. He has been dubbed a “genius” by both Wired and PC Magazine and has earned awards from NASA, the National Science Museum and the Cooper Hewitt, among others.

An icon in her field, Leibovitz creates portrait photography that reveals the strength, vulnerability and humanity of her subjects. She began her career with Rolling Stone in 1970, bringing singular insight and an unmistakable aesthetic to the art of celebrity portraiture and discovering in some of the world’s most prominent people something new and previously unseen.

Since 1983 the New York-based artist has continued to shoot groundbreaking photographs for Vanity Fair and Vogue, along with numerous arts organizations, and her work has been collected in many books, including Women (1999), American Music (2003) and most recently, Annie Leibovitz: Portraits 2005–2016. Leibovitz’s photographs have appeared in the National Portrait Gallery and the Smithsonian American Art Museum in Washington, DC, among other prominent venues. In 2000 the Library of Congress named her a Living Legend and her significant contributions to the art of photography have also been recognized through awards such as the Centenary Medal of the Royal Photographic Society in London, among many others.

Working across several disciplines, Cai is best known for his signature “explosion events” and paintings made by detonating gunpowder that attempt “to achieve a sense of the eternal from the ephemeral.” The Chinese artist’s work has been featured in solo exhibitions at the Metropolitan Museum of Art and the Guggenheim, which hosted the 2008 retrospective I Want to Believe.

In 2012 Cai earned the prestigious Praemium Imperiale from the Japan Art Association and was among five artists to earn the first US Department of State Medal of Arts award. In 2016 Academy Award winner Kevin Macdonald further illuminated the artist’s life and work in the Netflix documentary Sky Ladder: The Art of Cai Guo-Qiang.

Leading up to the full Commencement ceremony, more than 200 graduate students will celebrate their own accomplishments at a special graduate hooding event on Friday, June 1 at the First Baptist Church in America. Risë Wilson, a New York-based arts activist and founder of the award-winning nonprofit The Laundromat Project, will deliver the keynote address at that ceremony. Currently the chief program officer at The High Line, Wilson has established herself as a leading advocate for the arts as a vehicle for change throughout a 20-year career in social entrepreneurship and community organization.