With his podcast Hungry, Sculpture alum Otis Gray 14 SC has created a food-centered podcast that blends entertainment and public engagement. 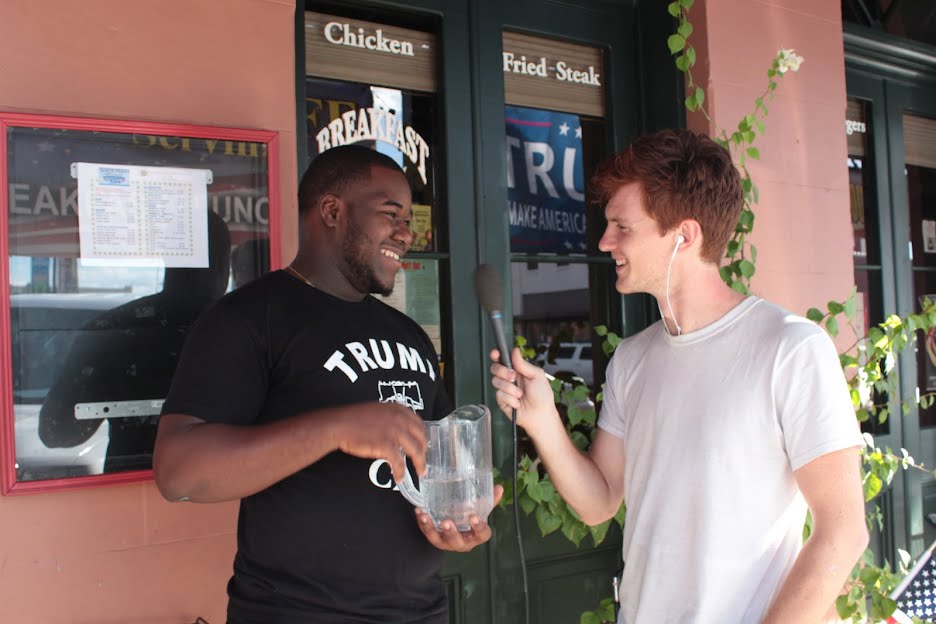 Creating and hosting an extraordinary podcast centered on food isn’t the first thing you might think a RISD Sculpture graduate would do. But for Brooklyn-based artist and avid cook Otis Gray 14 SC (above right), it feels like the most natural thing in the world.

Now in its second season, Gray’s podcast Hungry is proving to be an exceptionally compelling and well-crafted mix of entertainment, enlightenment and public engagement.

Gray got the second season off to a strong start in January with a fascinating episode called Trump Loaf—revolving around a restaurant in rural Texas that the owners renamed Trump Café two weeks before the election. In a spicey twist to the story, the café is run by immigrants—an Israeli couple who are Muslim.

Despite his personal distaste for the new president, in this episode Gray goes to great lengths to hear what the Trump supporters who work at and eat at the restaurant say about why they voted the way they did.

On a different but equally compelling note, the latest podcast—called Arioso—focuses on a chef/artist/musician who runs a purposefully out-of-the-way restaurant in the New Mexican desert. “There’s a lot of thinking and talking about the creative process in this one,” Gray points out.

“I’ve recently brought on a couple awesome RISD folk to help me out,” Gray says. Cass Cannon 14 GL is working on social media, Jia Sung 15 IL did the album art for the Trump Loaf episode (see above), Eron Hare 14 IL contributed the same for the Arioso episode and a number of other RISD illustrators are getting involved, too.

You can subscribe to Hungry on iTunes or Soundcloud and follow along on Instagram and/or Twitter. But most of all, give it a listen and be sure to rate it. Gray is all ears.

RISD Careers hosts a full-day entrepreneurial “boot camp” to help artists and designers interested in making a living through their creative work.