Speaking to students and faculty, the shape-shifting artist traces her path from research to performance to solo exhibition and back again. 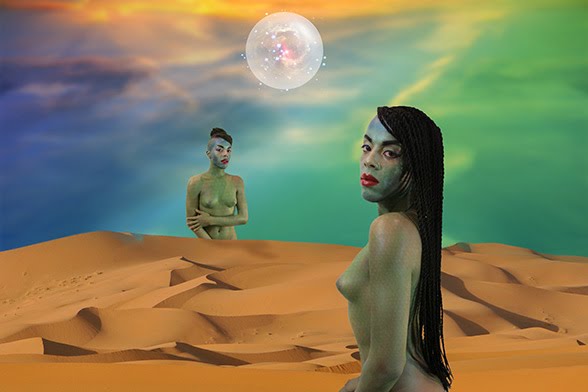 As part of the Sculpture department’s visiting artist series, Juliana Huxtable spoke to a group of students and faculty in the Chace Center’s Metcalf Auditorium on December 5. She captivated the audience with a personal glimpse into the genesis of her wide-ranging artistic practice, from early, informal lessons in color theory from a fastidious and fashion-conscious mother in Bryan-College Station, TX to her transference of queer nightlife culture into an intimate and original body of work.

In 2015 curators Lauren Cornell and Ryan Trecartin 03 FAV invited Huxtable to participate in Surround Audience, the triennial at the New Museum in NYC. While that proved to be a breakthrough moment for the young Brooklyn-based artist, she has also performed at MoMA, the Whitney Museum and White Columns, among other venues, in the recent years.

With her tendency to begin sentences with the words: “I’m really fascinated by…,” Huxtable conveys a polymath’s curiosity when she discusses her process. Her fluency in aesthetics and symbolic representations adopted by fringe communities is punctuated by a narrative history of internet archives and linked back to ancient myth and history. Presented as an hour-long talk, the impact of this content is kaleidoscopic—almost vertigo inducing.

In her work, the avid Tumblr user morphs from performance artist to visual artist to writer to DJ/nightlife host to fashion model and back again, so it’s no wonder that in the ideologically fraught, identity-saturated year of 2017 she has focused her creative efforts on political action.

Huxtable’s first solo show, A Split During Laughter at the Rally, opened last spring at Reena Spaulings in New York. In it she questioned protest “culture” and riffed on the iconic designs of Black Panther Minister of Culture Emory Douglas (who visited RISD in January to deliver the 2017 Martin Luther King, Jr. keynote address) through a subversive poster series, with titles like The Feminist Scam, Transsexual Empire and The War on Proof. The references for this work, she explained, run the gamut from Infowars—the platform of right-wing conspiracy theorist Alex Jones—to the historically charged apparel of British punk rock devotees.

“I believe that current discussions surrounding appropriation stem from a crisis of static representation on the left,” Huxtable asserted. “A concrete leftist aesthetic does not exist.” Listeners were left to decide where to go with that.