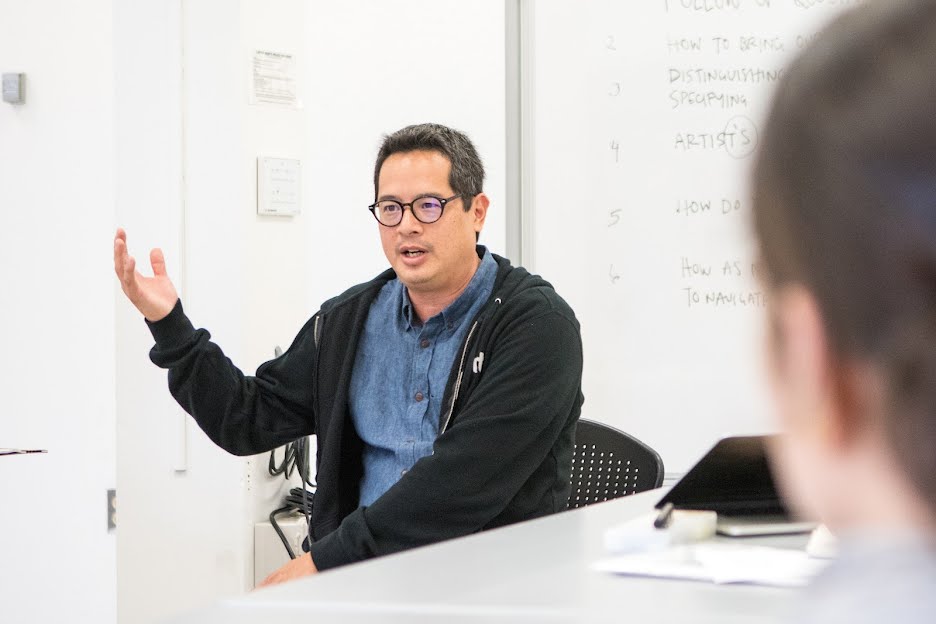 As the first speaker in RISD’s new Community Dialogues series, activist and author Jeff Chang urged students to advocate for social justice through their work.

When writer and activist Jeff Chang spoke to a packed crowd at the RISD Auditorium on September 18, he began by reflecting on how much has changed since the September 2016 publication of his most recent book, We Gon’ Be Alright: Notes on Race and Resegregation. “After the election,” he recalled, “people wrote me to ask [if we were really going to be ok].” By way of response, Chang echoed the resilience expressed in the Kendrick Lamar song that inspired the book title: yes, we will be alright—but only if people face this “fraught historical moment” with the energy it demands.

As the first speaker in RISD’s new Community Dialogues series, the Executive Director of Stanford’s Institute for Diversity in the Arts and author of such other books as Who We Be: A Cultural History of Race in Post-Civil Rights America and Can't Stop, Won't Stop: A History of the Hip-Hop Generation urged students to “make the revolution beautiful” by ensuring representation, inspiring empathy and building communities committed to equity. Chronicling the past 50 years of social justice movements in the US, he also argued for the essential role of arts activism as we approach the year 2042, the point at which there will no longer be a majority race in the US. “If we will all be minorities,” he asked, “how do we imagine a new majority?”

During the Civil Rights era, said Chang, people of color, feminists and queer communities made art that introduced “new ways of being and seeing” and inspired organizational structures for taking direct action. Through platforms like the Yardbird Reader (which African American writer Ishmael Reed cofounded in 1972), visual, performing and literary artists built coalitions that transcended difference by acknowledging the value of all perspectives. At the same time, Chang noted, the newly-formed National Endowment for the Arts provided significant support to arts and cultural groups devoted to racial reconciliation and other progressive causes.

“To believe in the arts is close to having religious faith,” Chang told members of the RISD community. And it is through that faith, he continued, that cultural producers in the US persisted during the culture wars of the 1990s and into the “post post-racial” present of resurgent white nationalism. For example, he pointed to the powerful work of Oree Origonol, who makes his portraits of police violence victims publicly available for use in demonstrations worldwide. “Through art we learn to experience empathy,” Chang said, “but empathy is empty without action… and privilege shows up as disengagement.”

During the q+a session that followed, Chang shared his thoughts about being a thoughtful ally to oppressed people and an effective activist in a higher education context that emphasizes individual achievement. “This society requires that we’re never not working,” he admitted “and the time we have to be human and build communities together is getting smaller and smaller.” But the writer also celebrated the value of small-scale creative organizing. “Find your folks,” he advised. “Dream up crazy stuff to do together and make it happen. And I think you’re already doing that.”

The day following his public talk, Chang met with grad students in an Advanced Critical Issues Sculpture class to talk more about personal experiences in activism. He told the group how the 2010 passage of anti-immigration legislation in Arizona inspired him to cofound CultureStr/ke, a network for radical and progressive artists to provide s­upport to oppressed people. At that time, he recognized a growing need for artists to help social justice movements at the ground level, rather than just demonstrate allegiance through their work—a need that has only grown stronger since then.

“Things have shifted on the ground again,” he acknowledged of the current political situation in the US, “but whatever happens, I’m confident we have the skills to figure it out.”