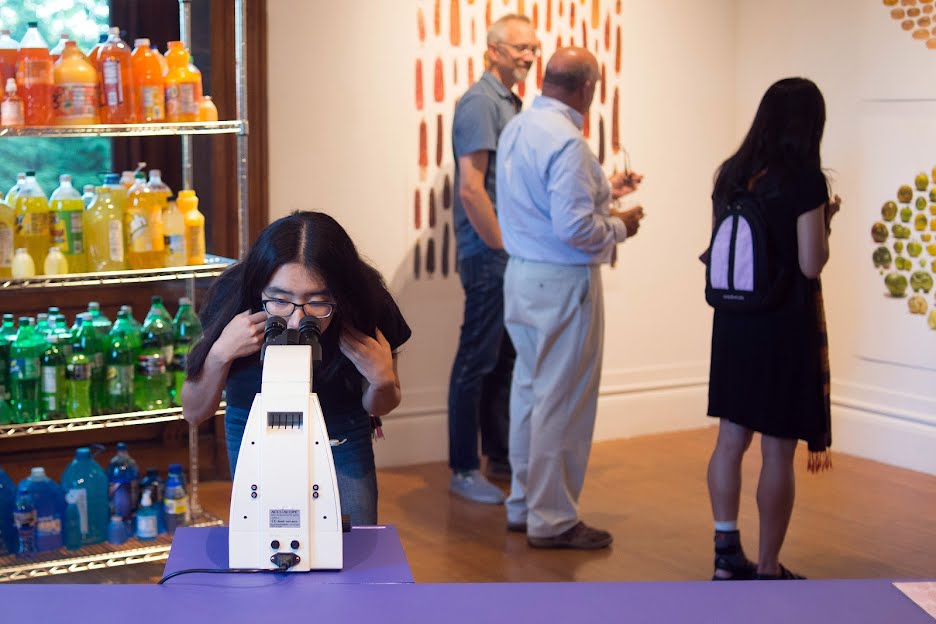 The Nature Lab is closing out its yearlong 80th anniversary celebration with Biodesign: From Inspiration to Integration, a fascinating exhibition on view through September 27 at RISD’s Woods-Gerry Gallery. Co-curated by Co-Works Director David Kim MFA 14 DM and RISD EPSCoR Coordinator Lucia Monge MFA 15 SC in collaboration with emerging biotechnologies expert William Myers, the exhibition showcases 24 projects from makers around the world who incorporate nature into their work in nondestructive, mutually beneficial ways.

Co-sponsored by the Nature Lab, Co-Works and Campus Exhibitions, Biodesign opened on Friday, August 24 with a half-day symposium in which selected artists spoke about their contributions to the rapidly growing field. In welcoming the audience, Nature Lab Director Neal Overstrom emphasized the need for collaborative, transdisciplinary thinking when solving today’s complex problems.

“The Nature Lab provides a platform for conversations about natural science that wouldn’t happen outside of an art and design school,” Overstrom notes. “It encourages new associations, ideas and questions about our rapidly changing relationship to living systems and how we might use innovations in biotechnology to address planet-wide problems like climate change.”

In making the first presentation, Myers spoke about an arguably less critical problem also borne of rapid technological advances combined with little human forethought: drones. He described a program in his home city of Amsterdam in which police officers are using trained eagles to take out drones that are threatening individual rights to privacy.

US-based visual/media artist Kathy High also focused on animal-human partnerships in Burial Globes: Rat Models, her 2009 memorial to transgenic lab rats bred to undergo pharmaceutical tests for drugs used on humans. Three of the five rats whose cremated remains were incorporated into her piece—Tara, Star and Matilda—were also part of her 2005 Embracing Animal exhibition at MASS MoCA. By naming the rats and introducing them to the public in this way, she hopes to acknowledge their individuality and commemorate their contributions to medicine.

Other projects on view in the exhibition focus on less visible creatures that humans have exploited for centuries, including silkworms, fungi and bacteria. Poet Jen Bervin, who is teaching at RISD this year, is showing work from her Silk Poems project, while recent graduate Megan Valanidas MID 18 spoke about and is presenting a new process for making compostable bioplastics. Much of the work speaks to designers’ willingness to—in Myers’ words—“embrace the humbleness that results from pondering the intricate interdependencies and resiliency as well as the devilish complexity of the biological world.”

In addition to humility, the exhibition also highlights the fun and surprises of both artistic and scientific exploration. Serious strategies for building with mushroom-based mycelium bricks (The Living) are balanced with more conceptual and light-hearted projects.

An ironic proposal by the London-based (Non)human (Non)sense Collective, for example, suggests genetically modifying the color of the entire species Gallus Gallus Domesticus (aka chickens) to a hot pink. If such a transformation were possible, the group notes, the bones of the 60 billion chickens we kill and eat every year would leave a distinct trace in the earth’s crust, “an identifier for the new geological age—the Anthropocene.”

Australian computational artist Jon McCormack also toys with the idea of “playing God” with his Fifty Sisters, a series of computer-generated plant forms that are grown algorithmically and incorporate the logos of the world’s largest oil companies. His experiments in “morphogenesis” reveal the computer’s ability to mimic human imagination, he explains, by creating algorithmic designs beyond his own abilities as a designer.

And Emma Conley of the Center for Genomic Gastronomy spins the tables entirely by “investigating the human body as a food source for other species.” Her piece To Flavor Our Tears imagines how we might please the palette of a moth species in Thailand known for clinging to human eyelids and drinking our tears.

Outlandish as some of these projects may seem, they all point to one reality: the space for cross-disciplinary creativity prompted by scientific research and artistic imagination is expanding exponentially. As Myers says, artists and designers inspired by and contributing to advances in biological research are “inviting us to reexamine our relationship to the living world and offering us approaches to making that relationship mutually beneficial.”