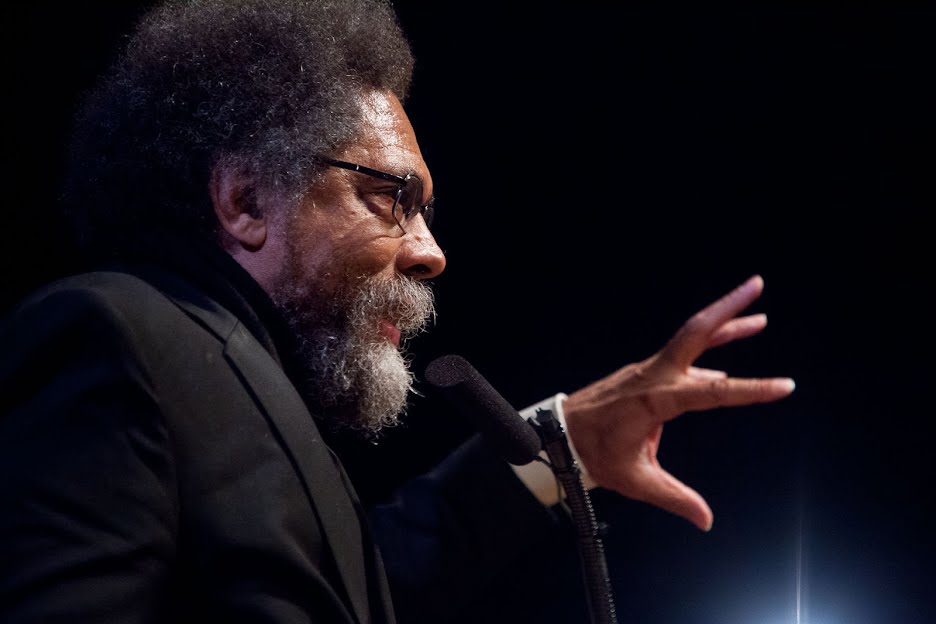 What risks are you willing to take to shatter the indifference that surrounds us? How can honesty prevail over deception? Visiting scholar and social activist Cornel West challenged listeners with such soul-searching questions when he delivered RISD’s annual keynote address honoring the life and legacy of Dr. Martin Luther King, Jr. on Wednesday, January 23.

Addressing a packed house and receptive audience, the Harvard professor and author of 20 important books about race and democracy spoke with contagious energy and humor, describing King not as a saint or mythical figure but an actual human being pushing back against centuries of racial stigmatism and hardship. “Brother King was a love warrior and a spiritual giant,” he said, “but he didn’t get here by himself. His people were chronically and systemically hated for 400 years … and yet he chose to teach the world what love is.”

Referencing Greek philosophers, Irish playwright Samuel Beckett, early black activist W.E.B. Du Bois and writer/activist Susan Sontag (among a host of others), West repeatedly made the point that the path to truth and beauty is paved with long-term resilience and a refusal “to allow despair to have the last word.” He reflected on King’s “noble discontent” and his lifelong calling, asserting that “indifference to evil is more insidious than evil itself.”

West described the circumstances that drove King to speak out in the 1960s not as merely problematic but in terms of full-blown “catastrophe,” not unlike the catastrophes of materialism, poverty, racism and militarism we’re still struggling with today. “Democracy itself is a catastrophe for those at the top [who feel threatened by it],” he proclaimed—“those 1% of Americans with 42% of the wealth.”

West advised RISD students and faculty—as well as “Sister Somerson, the visionary and courageous captain of the ship”—to pay attention to everything that’s going on in the world and maintain a sense of the whole. “Americans have been sleepwalking for decades,” he insisted. “Right now, we’re dropping bombs on nine different countries!”

But West demurred when asked to speculate about which presidential candidates might win the White House in 2020. “I don’t look up to the top for deliverance,” he explained. “Social movements are the thermostat of society; politicians are just the thermometers.”

Before leaving the stage to speak with a long line of students and well-wishers, West accepted a citation presented by Vice President of Social Equity & Inclusion Matthew Shenoda and Assistant Dean Tony Johnson 93 SC, who has led the MLK Series planning committee for years. “Our lives begin to end when we become silent about the things that matter,” Johnson read from the citation. “We thank you, Dr. West, for your integrity and the balm of truth you offer.”