In Their Own Words

A recent series of woodcut portraits by Daniel Heyman, a Senior Critic in Printmaking, is highlighted in the current issue of the Princeton Alumni Weekly. 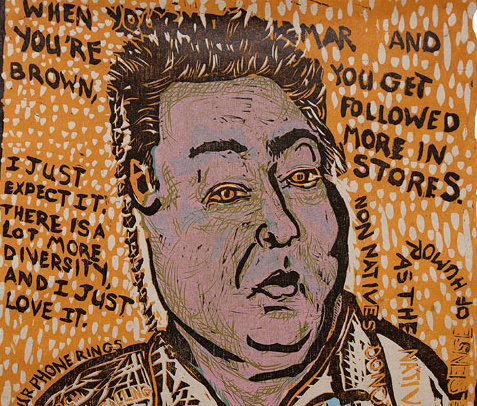 A recent series of woodcut portraits by Daniel Heyman, a Senior Critic in Printmaking, is highlighted in the current issue of the Princeton Alumni Weekly. Native Impressions: In Our Own Words, a collaboration with University of North Dakota professors Lucy Ganje and Kim Fink, gives voice to contemporary native people living in the Northern Plains.

Heyman and Ganje traveled to four reservations in North Dakota to speak with residents and collect “stories of languages lost, family traumas spanning generations and the ongoing loss of Native American land.” Despite their personal losses, Heyman tells the PAW, people living on the reservations are dedicated to improving life for their communities.

“I’ve chosen communities that have been talked about endlessly in the US body politic without ever really being asked directly, ‘What do you guys think about this?’” Heyman goes on to say. He hopes to travel to the Arctic Circle later this year to interview native communities along the shores of Alaska and northern Canada that are feeling the effects of global warming.

Each of the Native Impressions broadsides is printed on handmade paper and includes the words of the people portrayed. The series will be on view in Hear My Voice at the Virginia Museum of Fine Arts from this August through February 2018.

images courtesy of the artists and Cade Tompkins Projects

Last fall during the National Day of Dignity and Respect, diverse families pasted rainbow-colored hearts on the doors and brick façade of Philadelphia’s office of US Immigration and Customs Enforcement.

“I sit in this hotel room and draw the face of an Iraqi who is telling the most humiliating and degrading story of his life.