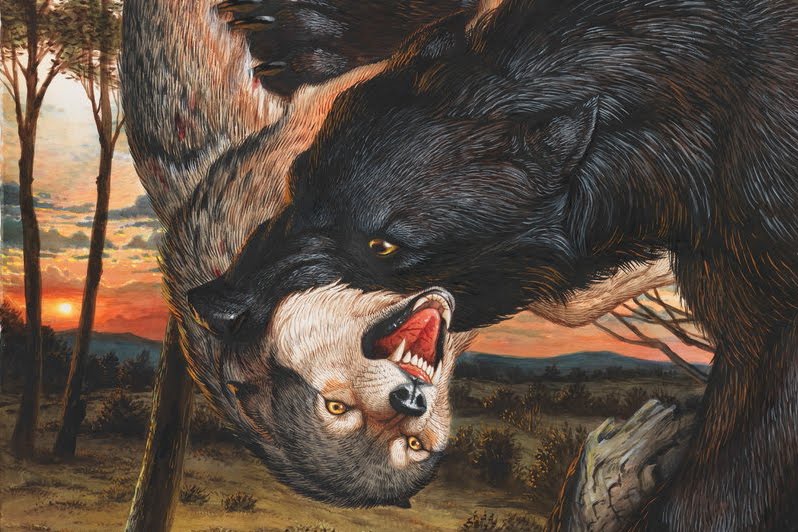 Walton Ford 82 FAV drew inspiration for Representation Veritable (detail) from hysteria in 18th-century France over a murderous beast on the loose.

“RISD’s summer Pre-College Program saved my life,” visiting artist Walton Ford 82 FAV told the crowd packed into the Metcalf Auditorium on Thursday, April 12. The charismatic painter—known for creating colossal, allegorical works in the style of naturalist illustrators—went on to explain that he was close to dropping out of his suburban New York high school when he got the opportunity to study at RISD over the summer and realized that he “was going to be OK.”

Once he was accepted as an undergraduate, Ford majored in Film/Animation/Video but fell hard for the medium of painting while participating in the European Honors Program in Rome his senior year. “I was a disaster as a filmmaker,” he quips, “but I learned a lot in the department about telling stories and being patient as a maker.”

He also learned a life-changing lesson in reading about celebrated director Martin Scorsese, who pointed out that the most important aspect of filmmaking is the position of the camera. As a result, Ford says, “every time I begin a new painting, I start by considering its point of view.” For instance, in a series of works based on 18th-century rumors of a murderous beast on the loose in rural France, he takes the point of view of the beast, allowing it to triumph over the real-life wolves that inspired the original rumors.

In explaining that his paintings are often inspired by old books he finds in used bookstores, Ford says he’s drawn to stories about “how animals—real, imagined and extinct—live in the human imagination.” Although he tries not to be judgmental in the images he creates, his paintings are subversive and typically comment on colonialism, classism and the disastrous effects of humans on the natural world.

In discussing the influential work of seminal naturalist John James Audubon, Ford explains that the “visceral quality” of his bird portraits inspired him to mimic Audubon’s one-to-one scale in his own paintings but also provoked works like Delirium (2004). The grisly painting shows a golden eagle caught in a trap and choking on noxious plumes of smoke. As the artist explains, Audubon had unsuccessfully attempted to gas the bird to death rather than damage its feathers using a more humane approach. (In symbolic retribution, Ford painted the trapper—or perhaps Audubon himself—lying dead in the snow in the lower left corner of the piece.)

Another series was inspired by the true story of a black panther that escaped from a zoo in Zurich in 1933 and survived in the Swiss countryside for 10 weeks before being killed and eaten by a local hunter. Most of the paintings represent the cat’s point of view, but one imagines the terrified perspective of local children who were warned about the hungry fugitive.

“My process is not at all original,” Ford said, “but I tell stories that haven’t been told before.” Despite the comment, students and other audience members at the talk peppered him with questions about his process, which prompted the artist to explain that he begins with pencil drawings on huge sheets of custom-made, 300-pound paper, then adds washes of transparent watercolors before highlighting his paintings in gouache.

During his visit to RISD, Ford clearly enjoyed discussing his work with fellow artists and jokingly bragged about getting the wet-in-wet watercolor technique just right the first time when painting La Brea (2016), a 10-foot-wide piece he exhibited last fall in his most recent solo show at his gallery, Gagosian Beverly Hills in Los Angeles. Titled Calafia, the exhibition featured work focused on animals specific to California, like the MGM lion and the (now extinct) California grizzly. In the right-hand panel of La Brea, two saber-tooth tigers rise up from the ancient tar pits and prepare to attack a modern-day mountain lion.

“It’s sort of an attraction-repulsion thing,” Ford says of this piece and his work overall—“beautiful to begin with until you notice that some sort of horrible violence is about to happen.”

During a winter residency at Wave Hill, Ashton Agbomenou 14 FAV began a series of portraits informed by fellow African Americans living in Harlem.

Long interested in balancing digital and analogue processes, Alex Dodge 01 PT has created a wonderful new series of paintings for Love May Fail, But Courtesy Will Prevail, his first New York solo show in five years.