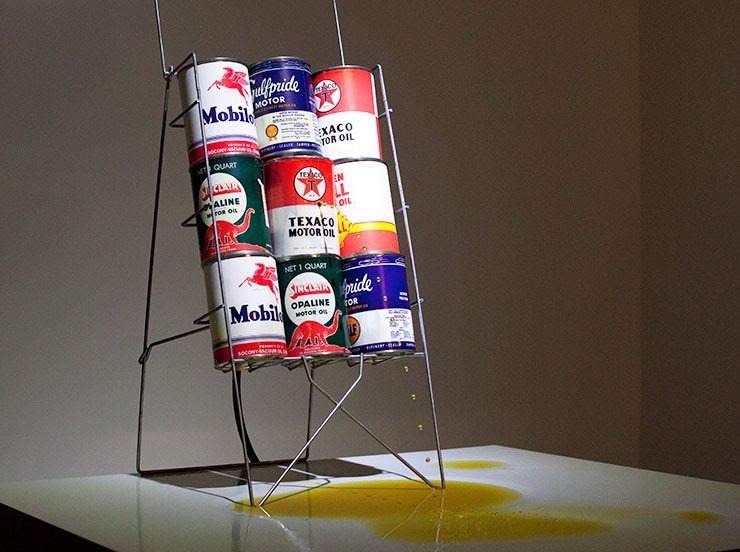 Supermajor, Matt Kenyon’s piece on the politics of oil, has taken on an unexpected life of its own.

Newly hired Associate Professor in Digital + Media Matt Kenyon is deeply interested in how art “lives as a story and as an object—in its multiple lives.” Over the years, he has embarked on a range of projects that take him beyond the studio and into the heart of complex political and economic systems—whether he’s turning his body into a barcode scanner to disrupt Nielsen market analysis (in Consumer Index) or collaborating with Syrian journalist Honey Al-Sayed and translator Laura Marris on an upcoming sculptural installation that explores the many ways translation affects the current refugee crisis.

Kenyon, a new media sculptor who earned his MFA at Virginia Commonwealth University and most recently taught at the University of Michigan, looks forward to the shift in scope afforded by RISD’s art-centered approach. “At large state schools, I’ve had opportunities to advocate for art within a larger research direction and align it with science,” he says. “But here it’s the inverse: Art is the norm, it’s the core. It’s clear that students are serious about becoming artists. This is a really special place that attracts people who are super-passionate about their work. And to me, that’s exciting.”

Kenyon has exhibited both nationally and internationally and has work in a number of permanent collections, including at the Museum of Modern Art in New York. He conducts his research under the umbrella of SWAMP (Studies of Work Atmosphere and Mass Production), a practice focused on “critical themes addressing the effects of global corporate operations, mass media and communication, military-industrial complexes, and general meditations on the liminal area between life and artificial life.”

Over the past year, Kenyon’s piece Supermajor has taken on a somewhat ironic and unexpected life of its own. Evoking the insatiable “seven sisters,” the cartel of companies that controlled global petroleum reserves during the mid-20th century, Supermajor presents a stack of nine oil cans (three cans wide by three cans tall) sporting vintage Texaco, Gulfpride and Mobil labels. As a sort of warped fountain, the punctured can at the center appears to endlessly spurt oil into a pool at the base of the stack. But on closer inspection viewers discover that the leak actually flows upward, back into the can—a physical echo of the illusion of “sustainability” furthered by the industry from its inception to its current, post-OPEC state.

In September 2015, when Supermajor was on view at Petrosains Science Centre in Kuala Lumpur, staff took surprising liberties with the artwork, swapping out the labels on the cans with vintage ones from Petronas, Malaysia’s state-run oil company. In other words, they turned a work of obvious criticism into a self-congratulatory display—a piece of Petronas propaganda—without ever contacting Kenyon.

Despite his initial dismay and the fact that the piece was physically damaged by this act of “nationalization,” the artist has come to see value and opportunity in the event. “Sometimes you make work that’s critical of large cultural and economic systems, and you feel like you’re speaking to the converted,” Kenyon says. “And sometimes I doubt that something set up in a gallery can truly connect with an audience that includes the CEO of an oil company. But this definitely did…I ended up in some really interesting conversations.”

Supermajor, currently installed at Kunstkraftwerk in Germany, now includes a Petronas can in its composition—a decision made fully and completely by the artist as a testament to the arrogance of the company. Reflecting on the exhibition and its aftermath, Kenyon says, “I don’t really think of my work as something that is intended to fix things that are wrong with the world. That’s not my place. I like what John Waters said—that the artist’s job is to fuck the world up beautifully. I like that quote and think about it a lot.”

Kenyon’s experience with Petronas makes an excellent preamble to Interventions in Capitalism, the Digital + Media research group he’s leading this semester—his first at RISD. Collaborating with his D+M colleague Edek Sher and graduate students from diverse disciplinary backgrounds, he’s exploring the intersection of art, design and technology through the lens of economic systems.

“The research group model is one of the many things that attracted me to RISD’s D+M program,” Kenyon says. “I was drawn to the idea of putting together an A-team of grads to talk about and challenge the way art circulates and lives in the world. It feels like a great opportunity to help shape something that’s really unique to the field.”

As a biodesigner and studio manager of RISD Co-Works, David Kim MFA 14 DM is deeply committed to principles of inclusion and interdisciplinarity.