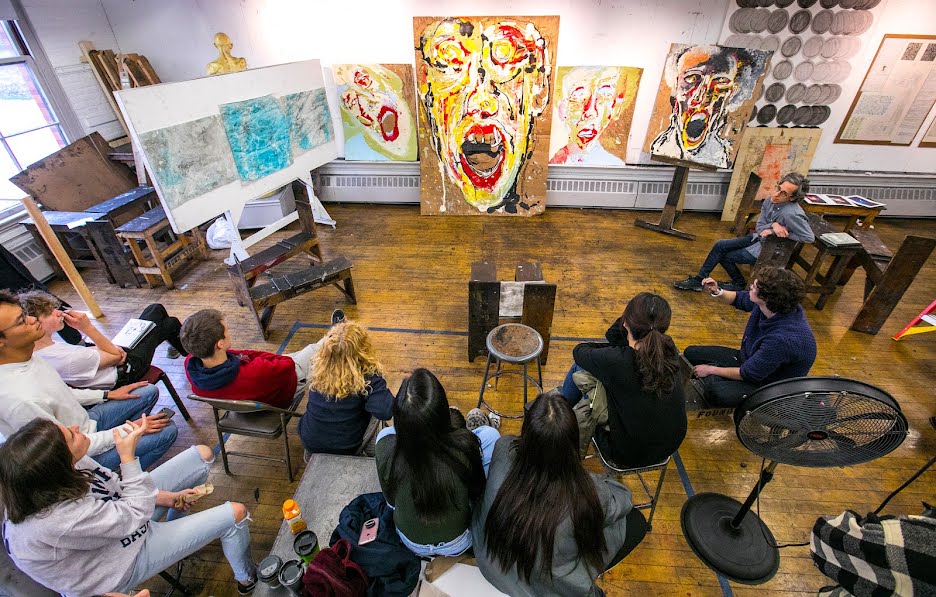 Associate Professor Daniel Lefcourt 97 PT (right) leads a critique of a striking series of paintings on cardboard created in his Drawing studio.

As fall semester comes to a close, first-year students across campus are getting their first taste of final critiques at RISD. Each one begins the undergraduate experience with a year in the Experimental and Foundation Studies (EFS) division, working closely with faculty and peers in their Drawing, Design and Spatial Dynamics studios. As EFS Dean Joanne Stryker explains, “students learn (and unlearn) how to critically make, think and live their work—how to take risks, how to fail and how to experiment.”

Drawing is arguably the most foundational of the Foundation studios, focused on a tool that artists and designers in every discipline use to investigate the world and generate ideas. As longtime Associate Professor Daniel Lefcourt 97 PT (himself a RISD graduate) sees it, most RISD first-years “come in with traditional, conservative drawing skills. My goal is to open them up—to introduce them to new processes and techniques that take them out of their comfort zones.”

The final assignment Lefcourt asked students to tackle this semester encouraged them to develop their own methods of invention and discovery rather than relying on preconceived ideas for artistic content. By beginning with materials and strict project constraints, he notes, students are able to “make discoveries, follow new directions and make real intellectual and aesthetic progress.”

At his final crit, Maine native Simon Misner 21 EFS showed a striking series of large-scale self-portraits on sheets of corrugated cardboard. “I laid the cardboard on the floor and poured paint on to create the base layer,” he explained. “I started with the biggest [piece] and made the smaller ones concurrently, flowing from one to the next.”

Misner’s peers praised the work, noting that the chaotic subject matter is reminiscent of Jean-Michel Basquiat paintings and the technique is similar to Jackson Pollock’s seminal splatter method. “The scratched cardboard creates texture,” one student commented, “and the crackling of the paint adds to the nightmarish feeling of insanity.”

One flight up in the Waterman Building, a Design section taught by popular Senior Critic Martie Holmer was responding to a different kind of insanity: climate change. Holmer's semester-long mission to teach new students how to convey meaningful messages through objects, spaces and experiences was nearly complete, as students presented artist’s books they’d created for their final assignment.

The class appreciated the graphic quality and simplicity of a book about melting ice caps and the plight of the polar bear created by Jorge Vargas 21 EFS, although one student pointed out that his handwritten text was less sophisticated than his cut-paper images. “Hand lettering is nice,” Holmer noted, “but you need to be neat.” She suggested laying the page over typeset text and tracing it by hand in order to get the size and spacing consistent.

Holmer was effusive in praising a book Karam Yoo 21 EFS created about the effect of global warming on native peoples, admiring the exquisite depiction of shadows on snow she made with watercolors and describing the opening image of a solitary, parka-clad figure as “heartbreaking.”

Concerns about ecology and the natural world cross all disciplines at RISD and make their way into EFS studios via multiple channels. Students began their final project in Pamela Unwin-Barkley’s Spatial Dynamics studio by visiting the Nature Lab and sketching an object whose skin and structure would serve as inspirations for a biomorphic, sculptural light fixture à la late sculptor Isamu Noguchi.

“My piece was inspired by the Mexican free-tailed bat,” said M. Blackburn 21 EFS, as she presented her work in a darkened studio in the Prov-Wash building. “I’m a big fan of bats.”

Unwin-Barkley marveled at Blackburn’s success in stretching different-colored nylon stockings over a wooden frame she made by hand. “These lunky, oversized joints are really nice and really creepy,” she noted.

The focus of the assignment, Unwin-Barkley adds, is on material transformation. “I encourage students to use common materials like grocery store bags, tinfoil and hot glue,” she explains, “and they really push the boundaries within those constraints.”

Although her current class worked mainly with their hands, first-year students are encouraged to use the cutting-edge tools available to them in the division’s digital fabrication lab and tap into assistance from Digital Education Manager Elliot Clapp 94 IL. “I taught them to use a simple 3D modeling program this semester and generally work at integrating technology into the curriculum,” says Clapp.

First-year student Jane Lee 21 EFS, whose light sculpture was inspired by an Australian tree pod she discovered in the Nature Lab, says she “had no idea that working in 3D would be this much fun.” Lee seemed to be enjoying her first crit and didn’t seem to be quite as exhausted with end-of-semester demands as many of her peers.

Victoria Khrobostova 21 EFS was also surprised by how much she enjoyed working sculpturally but says she’s pretty sure she’ll select Illustration as her major, noting that “you can do 3D work in Illustration too.” Is she having a hard time staying awake through her first round of crits? “I’m constantly tired,” she admits, “but I’ve only pulled one all-nighter this term.”

As a first-year student Nevin Dunn 20 IL is pushing his conceptual thinking to places he hadn’t yet imagined—and loving the challenge.

As of this fall RISD students can pursue interdisciplinary concentrations in two new areas: Drawing or Computation, Technology and Culture.