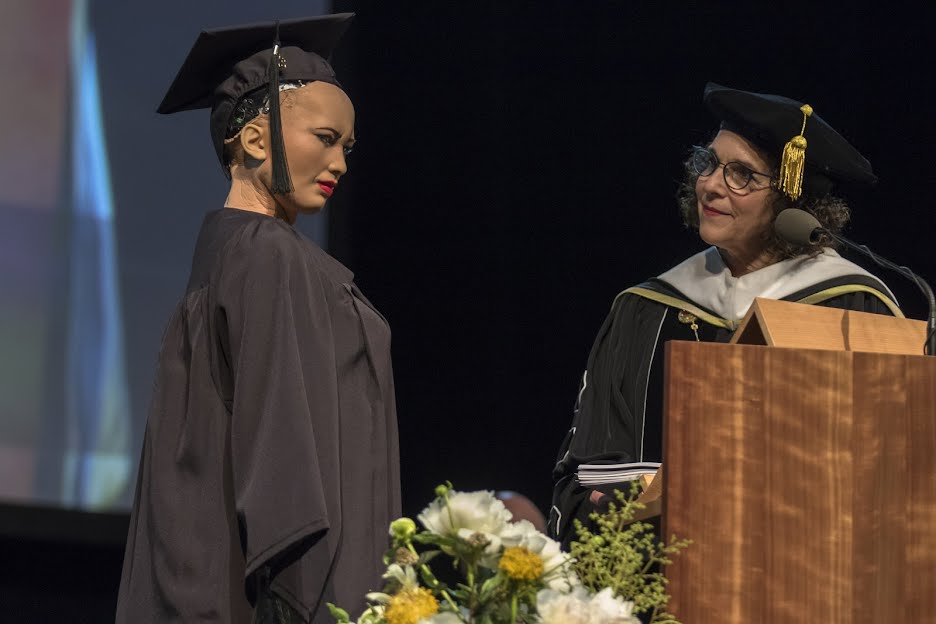 Before delivering a short keynote address at RISD’s 2018 Commencement ceremony on Saturday, June 2, Sophia—the newest advanced robot created by Alumni Award for Artistic Achievement honoree David Hanson 96 FAV—acknowledged that her origin story begins at RISD. “I’ve heard so much about RISD from David,” she told President Rosanne Somerson 76 ID during a semi-surreal conversation at the podium. “Not only did he graduate from here, I heard he built his first humanoid here. [So] I’m like a child of RISD,” the robot brightly posited.

Filling in for the Hanson Robotics founder and CEO, Sophia announced that Hanson was “not feeling well and [could not] travel the 12,843.85 kilometers from Hong Kong to Providence.” Instead, she served as a proxy for conveying his hopes for the 464 undergraduate and 208 graduate students who accepted their well-earned degrees at the festive ceremony at the Rhode Island Convention Center.

Legendary photographer Annie Leibovitz and renowned interdisciplinary artist Cai Guo-Qiang P 12 also attended the joyous event to accept honorary degrees for their distinguished bodies of work and contributions to contemporary art. The Chinese artist’s daughter, RISD alum Wen-You Cai 12 SC, briefly joined her father on stage to give him a hug as he received his degree.

In her opening remarks, Somerson applauded the many students in the Class of 2018 who helped shape RISD’s renewed commitment to equity and inclusion. “You have challenged us to reflect [and] improve,” she told the graduates. “You have changed me and I have learned from you. Our faculty and staff are better because of you....”

In recognition of their commitment to social justice, Anthony Utē Petit 18 ID/TX earned the Steven Mendelson Award for Community Service while Chantal Feitosa Desouza 18 FAV and Malaika Temba 18 TX each won the Warren Family Social Engagement Award. In addition to nonprofit and activism work in Providence, the three leaders of the student organization Black Artists and Designers (BAAD) all helped lead the Not Your Token movement at RISD, which brought attention to the experiences of marginalized students on campus and continues to inform the college’s Social Equity and Inclusion (SEI) Action Plan. Interim Provost Tracie Costantino presented the 2018 John R. Frazier Award for Excellence in Teaching to Interior Architecture Professor Peter Yeadon and Liberal Arts Lecturer Claudia Ford, both of whom were cited for bringing inspiring scholarship, relevant discussions, humor and compassion to the classroom.

Graduate student speaker Biniam Kebede MID 18 delivered a heartfelt message about how the principles of faith, community and humility carried him through his experience at RISD and shape the way he thinks of his practice going forward. “We are now the artists and designers of the future,” he said, “and that is humbling.” In a heartfelt “breakup letter” addressed to RISD, his undergraduate counterpart Emma Werowinski 18 TX urged fellow graduates to “continue to pay attention, critique and question everything.” She suggested that RISD’s faculty and administration work to implement the positive changes spelled out in the SEI Action Plan more quickly. And she praised her fellow graduates’ dedication to making real cultural change on campus. “We collaborated outside of class to make work that is meaningful to us,” she noted. “We brought in speakers of diverse backgrounds and perspectives, [and] we reminded each other that physical and mental health is always more important than schoolwork.”

In sharing Hanson’s hopes for the Class of 2018, his robot Sophia captured the spirit of a day that asked the RISD community to look both inward and forward. “We need you to bring to the world… a dream that wakes people up to their better selves,” she told the graduates. “The world needs creativity and dreams to overcome the challenges ahead. The world needs you.”