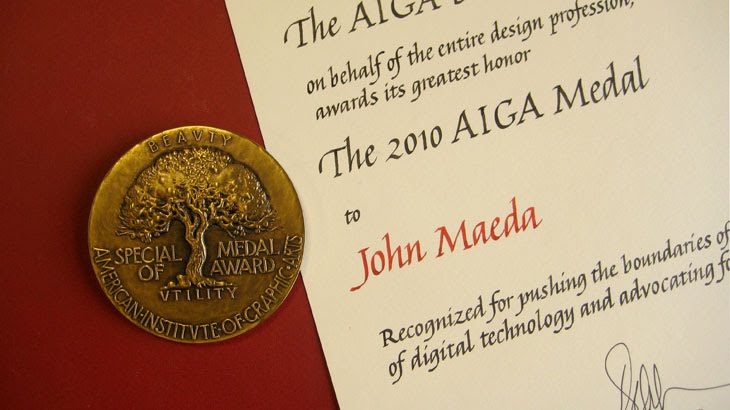 On April 7 RISD President John Maeda accepted a 2010 AIGA Medal at a special event hosted by the American Institute of Graphic Arts (AIGA) in New York City. Presenting an award widely considered to be the most distinguished in the field, the organization recognized him “for pushing the boundaries of design into new realms, championing digital technology in education and art, and being a leading advocate for creativity as a business.”

Maeda shared the honor with two other 2010 AIGA Medalists – Steve Frykholm, who was applauded for his 40-year commitment to establishing the highest standards of corporate design at Herman Miller,and Jennifer Morla, a professor at California College of the Arts and principal of Morla Design, who earned recognition for her teaching and design work. In addition, theBright Lights awards ceremony celebrated two recipients of the AIGA Corporate Leadership Award: Method and Tiffany & Co.

Since 1920 AIGA has awarded its illustrious medal to individuals who have set standards of excellence over a lifetime of work or have made individual contributions to innovation within the practice of design, whether through design, teaching, writing or leadership in the profession. In his acceptance speech at the event, Maeda emphasized the value of teachers who prove to be pivotal in the lives of their students, and the importance of remembering to thank them for their influence and support. “Teachers are often your greatest critics, and those critics are often those closest to you,” he pointed out at the event and in his recentour.risd blog post about it.

With the AIGA Medal, Maeda may be the first individual to receive every major career award in graphic design, having won theChrysler Design Award, the Mainichi Design Prize (Japan’s most prestigious award for design), the Raymond Loewy Designer Award and the National Design Award for Communications Design. In addition, he has been inducted into theArt Directors Club Hall of Fame.