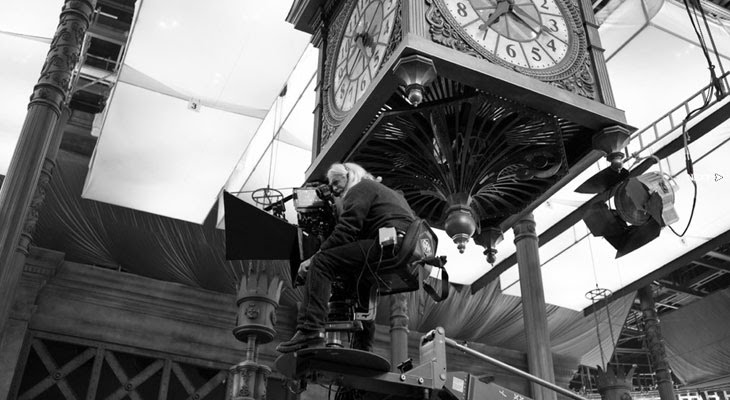 In his seventh collaboration to date with film director Martin Scorsese, cinematographer Robert Richardson 79 FAV shot the much-anticipated new movie Hugo, helping to create the wonderful atmosphere that makes the director’s first foray into 3D so successful. Equally key to their success is that the film is based on great material: the Caldecott Medal-winning children’s novel The Invention of Hugo Cabret, by another RISD alum Brian Selznick 88 IL. The combination earned Scorsese a Golden Globe for Best Director and an acknowledgement in his acceptance speech of the pivotal role these two RISD alumni played in making the film a winner.

Set in the 1930s, both the book and the film tell the story of an orphan named Hugo (played by Asa Butterfield in the film) who’s secretly living in the walls of a Paris train station, where he winds the station’s clocks and befriends an enigmatic toy seller and his goddaughter. Though the film is something of a creative departure for a director best known for gritty films likeTaxi Driver and Goodfellas, it also deals with a subject close to Scorsese’s heart: the story of the early days of filmmaking and the genius of the late French filmmaker and amateur magician Georges Méliès (played byBen Kingsley).

Selznick says that his book was inspired in part by Méliès’ 1902 film A Trip to the Moon, in which a rocket is shown zooming towards a moon with a face on it. “All of a sudden, with a cut of the camera, the rocket goes right into the eye of the man on the moon,” he explains. “He’s got the rocket in his eye, and white goo is kind of coming down where the rocket hit the moon, and he’s sticking his tongue out.”

That’s the type of imagery that not only inspired Selznick’s incredibly detailed cross-hatched illustrations for the book, but subsequently led Richardson to spend days perched high atop a camera crane shooting footage to bring the film version alive. Much of the film is shot in a magnificent recreation of the train station built inside London’s Shepperton Studios. When the author visited the production last summer, he initially “felt like an interloper,” he says, especially given all the period-costumed extras and intricate details of the set that he had previously only imagined on paper. “It was artistry on a scale I’d never seen before,” Selznick admits.

Richardson notes that inHugo and the other films he has shot with Scorsese in the last couple of years – includingShutter Island and George Harrison: Living in the Material World – the director has been gradually taking “a more classical approach to the images,” doing slightly less camera movement and “allowing more things to take place within the frame.” And working in 3D proved to be especially invigorating for both of them.

“It sounds like a cliché, but the idea is that you’re in the world with” Hugo and Selznick’s other characters, Scorsese told the Associated Press in talking about his decision to film in 3D. “Every shot that we did was a discovery and an experiment,” he notes, adding that each one felt more like a “moving sculpture” than a static painting. Despite the learning curve of using the new technology, Scorsese says that filmingHugo was one of the most rewarding experiences he’s ever had making a film. And for both of the RISD alums involved, helping the accomplished director to interpret Hugo’s story – and the story of filmmaking itself – for the big screen proved to be an equally extraordinary experience.