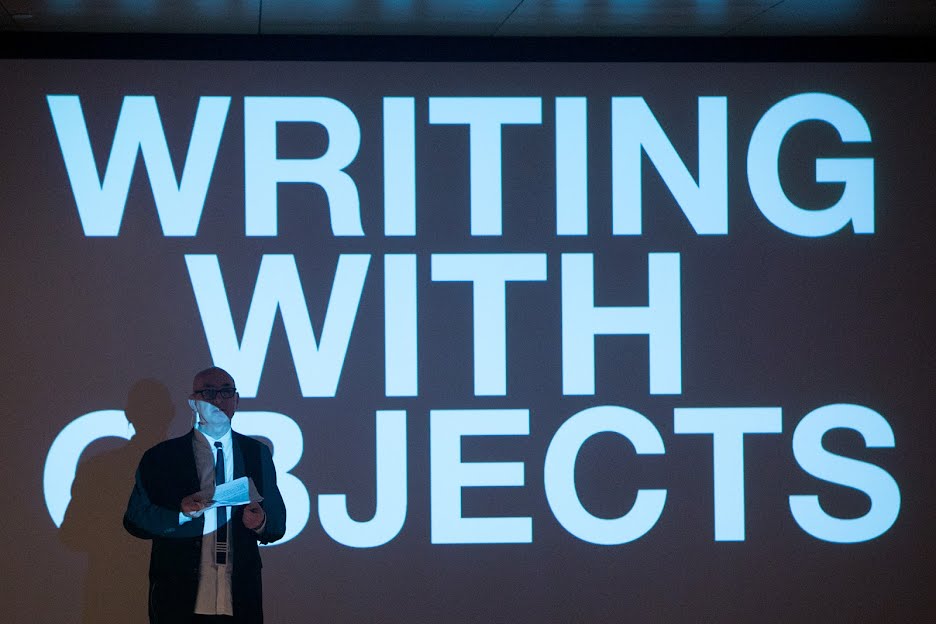 “No two people see an object in the same way. Each of us brings our own memory, experience and background to the act of looking.”

So says designer, consultant and author Murray Moss, who made a name for himself in the 1990s surprising design enthusiasts with uncannily juxtaposed pieces at MOSS, the groundbreaking NYC gallery he ran for nearly 20 years with his partner Franklin Getchell. Long a mecca for design lovers, MOSS would display high-end desk accessories next to models of fighter airplanes—or porcelain dog figurines peeking out from behind a set of impossibly fragile crystal champagne flutes.

“By juxtaposing disparate objects,” Moss explains, “I can suggest relationships and infer meaning. I can harness the objects and use them as a language for telling stories.”

This fall Moss is presenting a series of lectures and workshops at RISD focused on how we use objects to create narratives and communicate ideas. At an October 19 talk in the Metcalf Auditorium, he spoke about some of the more memorable displays he presented in his SoHo gallery and its shorter-lived sister gallery in Los Angeles.

One holiday display that paid homage to immaculate conception featured a massive Christmas tree adorned with glass sperm ornaments intended to “impregnate all of New York with joy and beauty.” A tongue-in-cheek sign proclaimed that “Santa’s coming.” Another showcase featured a plethora of early 1900s Nymphenburg-Misteli porcelain figurines—Moss’ obsession of the moment—set up to spin like music boxes. “People hated them,” he recalls. “They didn’t think they were sufficiently ‘modern.’”

Moss also shared with students the thinking behind his unique sense of taste—why certain designers he has championed over the years speak to him so powerfully. He’s mad about glass and porcelain bottles by Hella Jongerius, the Dutch industrial designer who resorts to using duct tape to hold the pieces together since the two materials melts at different temperatures and therefore can’t be fused together. “She isn’t interested in solving that particular problem,” Moss explains gleefully, “so using the tape is a brilliant way of avoiding perfection.”

Moss has also energetically promoted the work of another Dutch designer, Maarten Baas. In 2004 he presented Where There’s Smoke, an exhibition featuring classic wooden furniture Baas charred with a blowtorch, pleased that it commented eloquently on the idea of metamorphosis.

Despite the many accolades and press coverage of MOSS, as a curator Moss is more interested in using carefully constructed narratives to cut through the noise.

Addressing a small group of graduate students in the RISD Museum’s Porcelain Gallery, Moss encourages them to view each display case as a short story and ask themselves what each one is about. A collection of chairs presented alongside an Alexander Calder sculpture in the Granoff Galleries, for example, is about balance, he says—“about making balance tangible.”

Next Moss urges students to imagine how they could alter the narrative by replacing one or more of the objects grouped together. “If you have any questions, just make up your own answers,” he says. “Ultimately you should be using objects to sell your personal beliefs, ideas and vision of a more perfect world.”

Moss will return to RISD on November 13 to deliver a talked called Interdisciplinary Design Becomes the Norm. His presentation begins at 6:30 pm in the Chace Center’s Metcalf Auditorium.

New graduate Ayah Badr 18 ID leaves RISD with the confidence she needs to turn her ideas into viable products.