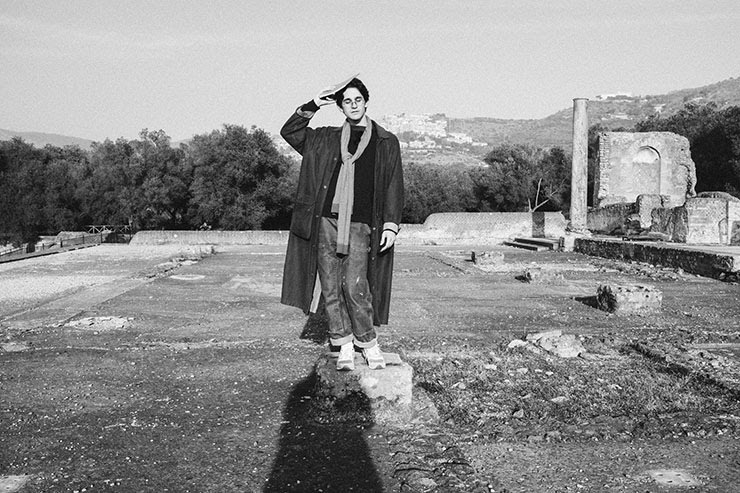 Charlie Ehrenfried 18 SC began taking art lessons when he was seven years old—“with really adorable teachers,” he says warmly—and for the next 10 years immersed himself in 2D making: “tons of painting, drawing…a lot of pen work with really crappy pens.” So by the time he got to RISD, he realized he didn’t know how to build anything, yet really wanted to—so much so that the impulse led him to major in Sculpture.

Oddly enough, it was through Abstract Painting, a Wintersession studio he took his first year at RISD, that Ehrenfried began to investigate the possibilities of sculptural art. “I would wrap canvases in cellophane or hammer nails into them to make 3D objects,” the artist recalls. So when his instructor, then-graduate student Andy Giannakakis MFA 15 PT, saw what he was doing, he said, “Don’t go into Painting. Go into Sculpture.

Though he faced a steep learning curve, Ehrenfried found that during sophomore year Sculpture faculty members offered a strong foundation in metalwork, woodworking and casting as a means of learning to express ideas three-dimensionally. “So then if you want to make something out of dough,” he explains, “you realize that it actually functions like steel and you can use the two similarly.” Studio technician Doug Borkman MFA 91 SC has proven to be especially helpful in helping him learn to work with materials and equipment.

This strong foundation of technical knowledge has enabled Ehrenfried to make interdisciplinary art investigating intersections of identity and culture. “I’m a gay Jewish man—but it’s limiting to say my work is just about Judaism and homosexuality,” he says. “It’s about gender and the maternal and my longing to become the matriarchal figure in Judaism. I love Judaism, so I’m trying to find where my critical stance toward the religion converges with my reverence for it.”

Now a junior, Ehrenfried is studying in Rome this semester through the European Honors Program and has also taken advantage of a wide variety of other opportunities at RISD, from serving as Sculpture’s representative to the Student Alliance to engaging with the Providence community through last summer’s Pre-Orientation Service Experience (POSE).

Ehrenfried is also pursuing two Liberal Arts concentrations—in both History, Philosophy + the Social Sciences (HPSS) and Literary Arts + Studies (LAS)—which is helping him situate his work in theoretical and cultural contexts. “I feel very interdisciplinary,” he says with a smile—“like I have many homes here and I like living in all of them at different points of the week.” The workload can be exhausting, he admits, but the rewards of a heightened emphasis on liberal arts studies to his studio practice make it worth the effort. Drawing inspiration from long fiction is especially rewarding, since literary study and making sculptural work require a similar kind of deep attention.

Although his studio work has sometimes been met with silence at crits, Ehrenfried notes that instructors like Chris Sancomb 93 SC have helped him put disappointing responses in perspective. “You really learn through making, and then living with your work for a while,” Sancomb told him, which helped him realize that “critique is just one aspect of the learning experience” here—and one he needs to learn how to balance and not take too personally.

But overall, Sculpture at RISD is “really empowering,” Ehrenfried says. “There’s a strong community of people who are invested in one another’s practices.” He also points out that although he spends most weekend nights in the studio, it’s because he enjoys it so much. “This is a warm environment conducive to the many things I want to pursue,” he says of both his major and his larger experiences at RISD. “I like it all.”

Exploring Ideas in the Dunes