Iranian grad student Arghavan Khosravi MFA 18 PT responds to the polarized political climate in the US with a very personal point of view. 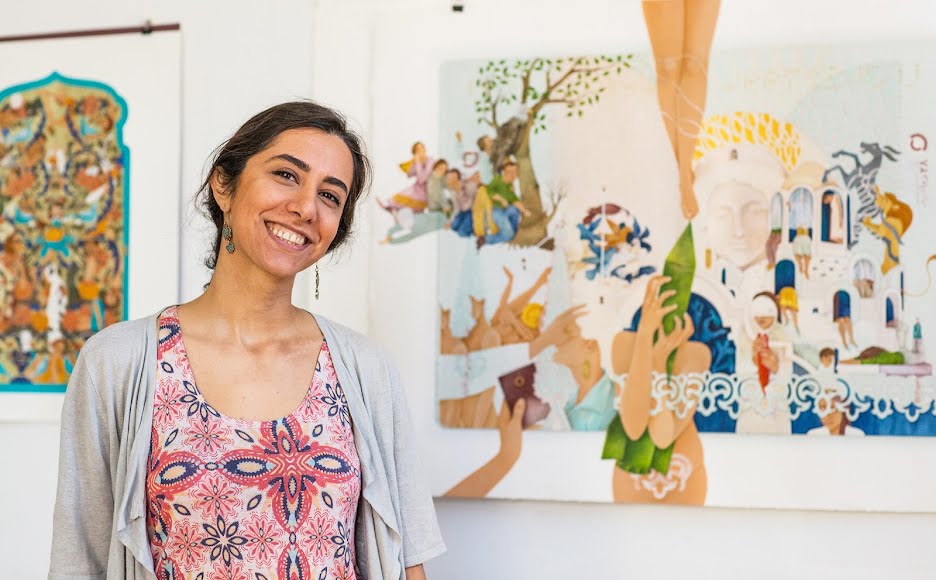 Iranian graduate student Arghavan Khosravi MFA 18 PT had just returned to Providence from a trip home when President Trump’s executive order blocking Muslim refugees and foreign nationals from entering or re-entering the US went into effect on January 27. Deeply disturbed by the news, she responded by digging out her expired passports and spontaneously turning them into art. “It seems I won’t need my passport anymore,” she declared in an Instagram post, “so I started painting on it.

“I didn’t have a concrete idea about where the project was going,” Khosravi recalls now that she’s had time to reflect on her gut response to the ban, “but I wanted to treat my passport as a symbol of national identity as well as something precious.”

The project is a logical next step for the prolific artist, who had already been working with appropriated images—“adding [her] personal narrative to screenprinted illustrations of Koran covers and tile mosaics from ancient mosques.” Khosravi stitched together actual passport pages and reproductions created with a scanner and a digital printer and then painted bold figures onto the pages, seamlessly combining autobiographical and political references.

“One of the great things about RISD’s Painting department is that we’re encouraged to experiment with different materials and disciplines,” says Khosravi, who earned degrees in illustration and graphic design in Iran and completed a post-bacc in painting at Brandeis University before coming to RISD. She’s pleased that her formal painting education began here in the US, where “students are given the space to develop their own language and approach.”

Khosravi’s approach is decidedly in flux; pieces she’s working on this semester are markedly different from what she made as a first-year graduate student last fall. The passport project, for example—as well as other intricate “3D paintings” crowding her well-lit studio—reflect the impact of a Wintersession class she took that made use of Co-Works, RISD’s interdisciplinary makers’ lab. She learned to laser-cut Plexiglas, laser-engrave wooden frames and use a UV printer and is now using these techniques to great effect. The passport numbers she cut into Plexiglas, she explains, represent her own identity and the identities of other international travelers affected by the executive order.

Although it’s now common for Iranian women to study in the US, Khosravi says that the difference in day-to-day life in each country is significant. In Iran women essentially lead two lives, she explains: in public they wear a hijab and comply with Islamic norms, whereas in private—in their homes—they can relax, drink a glass of wine and wear informal Western clothing.

Since these lifestyle differences also play a role in the work Khosravi is creating, she’s aware of how easy it is to overstep traditional boundaries of propriety. Still, she can’t resist posting images of her paintings on Instagram, where she has amassed an international fan base of more than 6,000 followers.

The positive feedback she gets through social media helps boost her confidence in her work, but Khosravi says the opinions that matter to her most come from faculty, peers and visiting artists at RISD. “My work has changed so much in this short period of time,” the first-year grad student notes, “which shows how constructive their feedback is. The stories I was telling when I started the program were more general. Now I’m trying to create work that is specific and personal.

“I’m still working on it, but I feel like I’ve found my path as an artist,” Khosravi adds. “It’s a long path and I’m at the very beginning, but now I have a sense of where I’m going.”