Painting ProfessorDonna Bruton, who has taught at RISD for 18 years and has had two shows in Providence since last summer, has long maintained a productive tension in her work between seemingly contradictory influences. 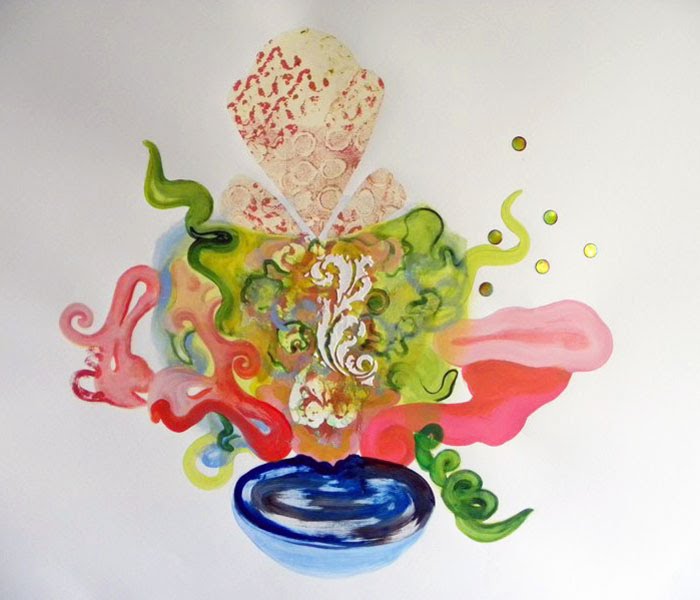 Painting ProfessorDonna Bruton, who has taught at RISD for 18 years and has had two shows in Providence since last summer, has long maintained a productive tension in her work between seemingly contradictory influences. Her overall approach to composition and the scale of her paintings – many are 8 x 8 feet square – stem from an admiration for Abstract Expressionism. But her subject matter and figurative and decorative motifs connect her painting to both feminist practices in painting from the 1960s onward as well as to one of her earliest influences: her uncleEdward Loper, a figurative painter based in Delaware.

“I had skills but I had doubts,” Bruton noted in ashort documentary film about her work. “There was De Kooning and there was Cy Twombly and all these people I admired. And then there was my uncle and his strict adherence to ways to apply paint. I think that I just began to take those doubts and questions into the work.”

In many of her pieces, Bruton creates a first layer with patterns made from hand-printed and cut-out tissue paper. She then adds abstract marks – big swooping gestures that leave a broken trail of several colors – or creates quiet, wistful landscapes. InDreamscape, a lacelike pattern projects over the entire sky, looming over a distant band of sparse trees. At the bottom, a big broken brushstroke of red and purple looks almost printed, rather than painted, on the surface. The title could apply to more than just this painting. As in dreams, the spaces Bruton creates are full of loaded fragments: a corner of gingham, a woman’s undershirt, cells seen in perspective. These mementos of memory connect in ways that are compelling and evocative but not immediately describable.

“Like the sound of her voice and the sound of her name, the top-note of Donnamaria Bruton’s art is melodious and soft, hovering over a dark, cool stream,” notedMaureen O’Brien, curator of Painting and Sculpture at theRISD Museum, in an essay accompanying Incidents, her recent show at Cade Tompkins Projects in Providence. “Music informs her painterly gestures, which, like summer jazz, evoke sweetness, longing and melancholy.”

Bruton’s colors accentuate the feeling of memories intertwining themselves with immediate sensations. Alternating between intense, often acid moments and soft, washed-out tones, they suggest shifting levels of consciousness, moving between moments of vivid presence to distantly imagined thoughts. Some of the works, likeMeditations Undisturbed (exhibited in the recent Cade Tompkins show), combine an ethereal beauty with a lurking sense of something unsettling. The bottom half ofthe painting shows floating ovals on a blue ground and a pink cloudlike shape under a lace medallion, while the top third shows a brown background stained by red paint dripping sinisterly from the top edge.

The appearance of unexpected motifs makes sense given the openness of Bruton’s process, where, as she puts it, “the image usually just emerges, and then I just respond.” Students who have worked with Bruton note her openness as a teacher – a characteristic that blends into her work. “When I’m open and receptive it flows easily,” she explains. “When I think too much, the work shuts down…. It’s like there’s a higher intelligence that you tap into. There’s an intelligence that the hand has, and an intelligence that the eye has.”

It is perhaps Bruton’s radical trust in this open process that makes her pictures connect so viscerally to various states of consciousness. Unlike most works, her paintings seem to have become themselves, rather than having been made.