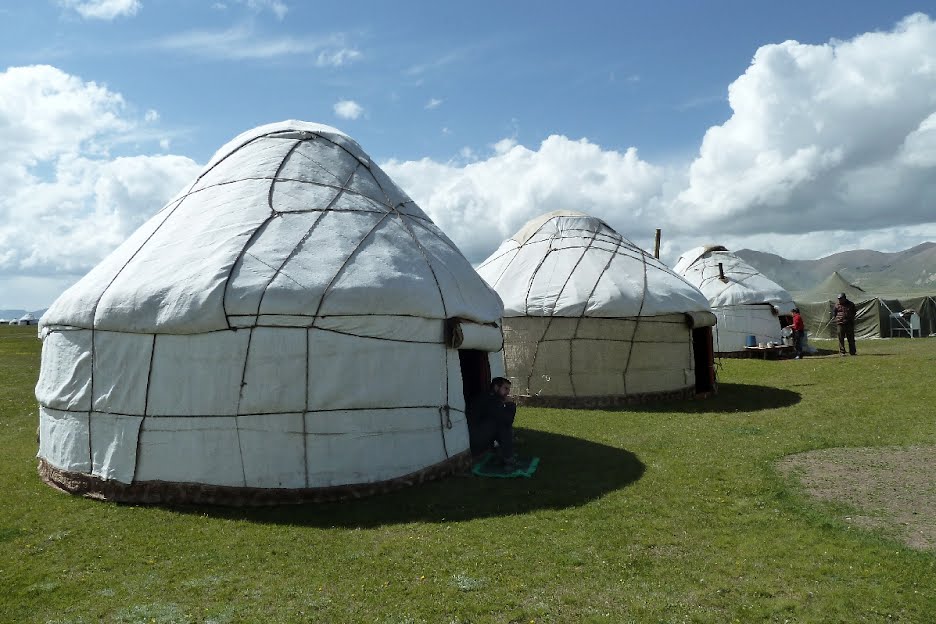 While living in a traditional Mongolian ger, 2017/18 Fulbright recipient Kim Dupont-Madinier BArch 15 will attempt to update the design with a more robust, weatherproof exterior.

Now that four recent alumni have earned Fulbright grants for the 2017/18 academic year, they’re looking forward to trekking across Europe and beyond to conduct independent research starting in the fall. Architects Abigail Stoner BArch 15 and Michael Jacobs MArch 14 will focus on using architecture to transform space in Europe, whereas Kim Dupont-Madinier BArch 15 will attempt to improve upon the centuries-old ger (or yurt-style textiles house) while living in Mongolia. Meanwhile, artist Heather McLeod 16 IL will study puppeteering and related performance arts in Italy.

“We’re absolutely thrilled that so many RISD applicants are selected each year for this prestigious award,” says Fulbright Program Coordinator Lisa Cramer. “This brings the total number of RISD alumni selected as Fulbright recipients over the past five years to 17, which is exceptional for a college of our size.” Since the Fulbright US Student Program was launched by the federal government in 1946, it has been promoting cultural exchange and mutual understanding around the world. Approximately 1,900 grants are awarded each year, with recipients studying in more than 160 countries.

Jacobs’ proposal was clearly influenced by the sense of borderless empathy originally envisioned by US Senator J. William Fulbright. Watching a seemingly endless stream of Syrian and Iraqi refugees making their way across Eastern Europe in recent years inspired him to think creatively about how to “create place for the displaced” in three Serbian cities along the Balkan migration route: Dimitrovgrad, Belgrade and Subotica.

Like Jacobs, Dupont-Madinier intends to live among the people she’s hoping to serve. She’ll experience life in a Mongolian ger while studying the local language and the techniques of a celebrated ger maker in the capital city of Ulaanbaatar. Gers, or yurts, sprang up as early as 600 BC and have long provided comfort and safety to the nomads of northern Asia. But residents of modern-day ger districts in Ulaanbaatar are living in tough conditions, subjected to intensely cold nights and the poor air quality created by smoke from the coal and wood they burn to heat their yurts.

Dupont-Madinier intends to fabricate her own more robust envelope material and use it to build a prototype ger with input from experts at the nonprofit GerHub and the nearby Institute of Engineering and Technology. Her goal is to use sustainable, contemporary design solutions to solve housing problems that have existed since ancient times.

Six thousand miles to the west in Berlin, Stoner will also work directly with experts: acclaimed Professor of Aural Architecture Alex Arteaga and his colleagues at Univerität der Künste. Since aural architecture relies on expressive media like art, music and poetry to capture the experience of sound, “conventional methods of architectural representation will be subverted, manipulated or rejected,” she writes, “…as I attempt to answer the question ‘How does one design the invisible?’”

Although she majored in Illustration at RISD, McLeod will also focus on 3D issues during her Fulbright year abroad. She’ll travel to Italy to explore communication, movement and narrative through puppetry under the guidance of scholars Mario Mirabassi and Ilaria Gianni, along with faculty members at the Accademia Dell’Arte. As she explains in her proposal, she will explore “performance and object manipulation, the value of puppetry past and present and how the art of puppetry is and can continue to be relevant in today’s world.”

Follow the progress of RISD’s 2017/18 Fulbright recipients at RISD Fulbright.

Three recent alumni have earned 2015–16 Fulbright grants to collaborate with artists and designers in Brazil, India and Austria.

This year, of the 20 RISD students and alumni who applied for Fulbright grants to support research and study abroad, four have been fully funded and a fifth won a Core Scholar Grant via Holy Cross College, where she teaches visual arts.