No Fish Were Harmed in the Making of This Crit 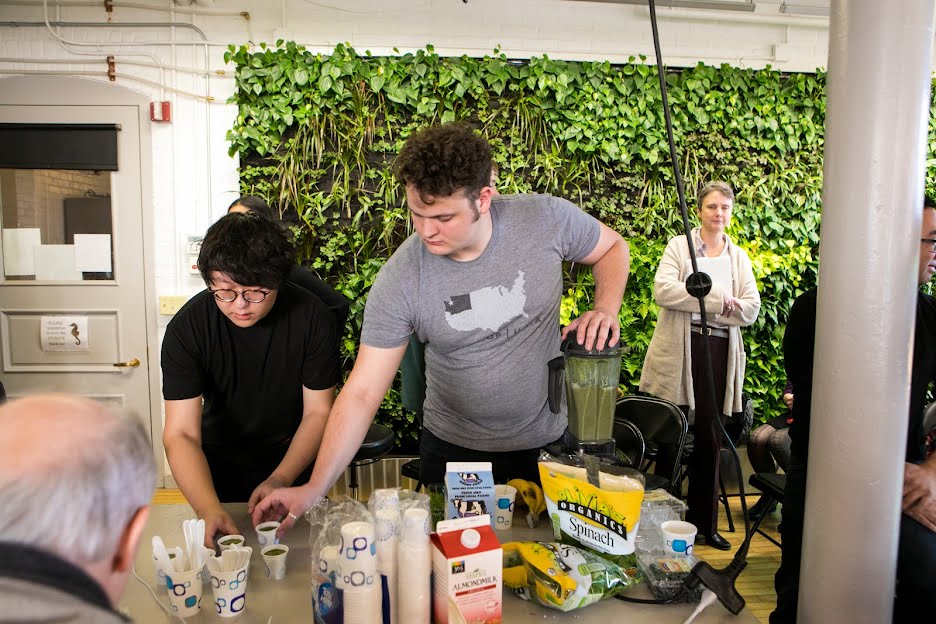 “What does an aquaponics system look like when it’s made for a design school?” Assistant Professor of Industrial Design Tom Weis MID 08 asked a group of students, visiting critics and faculty gathered for a final critique in the Nature Lab’s wet lab on December 13. Students in the special topics course Weis co-taught with Biological Programs Designer Jennifer Bissonnette pursued that question all semester by designing and building small-scale aquaponics systems to serve as proposals for a potential full-scale installation in The Met, RISD’s main dining hall.

As focus on food security has risen around the world, so too has the implementation of such systems in community settings. Arriving on campus in the form of this ID studio course, the trend perfectly complements RISD’s increased focus on biophilic design, which is supported by a $280,000 grant the Nature Lab earned from the National Science Foundation earlier this year. Participating students found an inquisitive client in RISD Dining + Catering, which has long been invested in supporting sustainability as it works to offer students unique and nutritious meals.

Two teams of students presented proposals: one, branded “RISD Grass,” landed on a system of wheat grass cultivation in grow beds fueled by waste created by either tilapia or catfish housed in an adjacent 1,000-gallon aquarium. The grow beds would be installed as natural dividers between booths in The Met’s “airport lounge” area. The second team focused on the production of leafy greens like lettuce, watercress and arugula and the herbs most used by the chefs: parsley, cilantro and basil. Their grow beds would be sustained by nutrients created by several tanks of Pumpkinseed fish.

The process of developing a system that seamlessly and simultaneously nurtures plant and fish life was a tall order in the allotted timeframe. “For a three-credit course, you had a lot to juggle,” Weis told students. Bissonnette echoed this by emphasizing the span of the project, “We geared this as both a science and an industrial design course and we started at the very beginning—with the process of seed germination.”

For Cody Chu 18 ID and the rest of his team, the biggest challenge was plumbing. “We learned that it’s really difficult to make things watertight,” he says. Guest critics Associate Director of Dining Pierre St-Germain and Executive Director of Auxiliary Services Ginnie Dunleavy also pressed the teams for more information regarding waste management, system maintenance and food storage practices, such as bottling.

“It feels like you’ve come a long way since your first crit,” observed Dunleavy. “Your plans make a lot of sense within the context of the school and on a practical level. A non-designer—someone like me—could look at this and understand why it’s useful to have and how it fits into our mission.”