Nottage Knows the World’s a Stage

Two-time Pulitzer Prize-winning playwright Lynn Nottage speaks to students about the reach, resonance and responsibility of art in the Trump era. 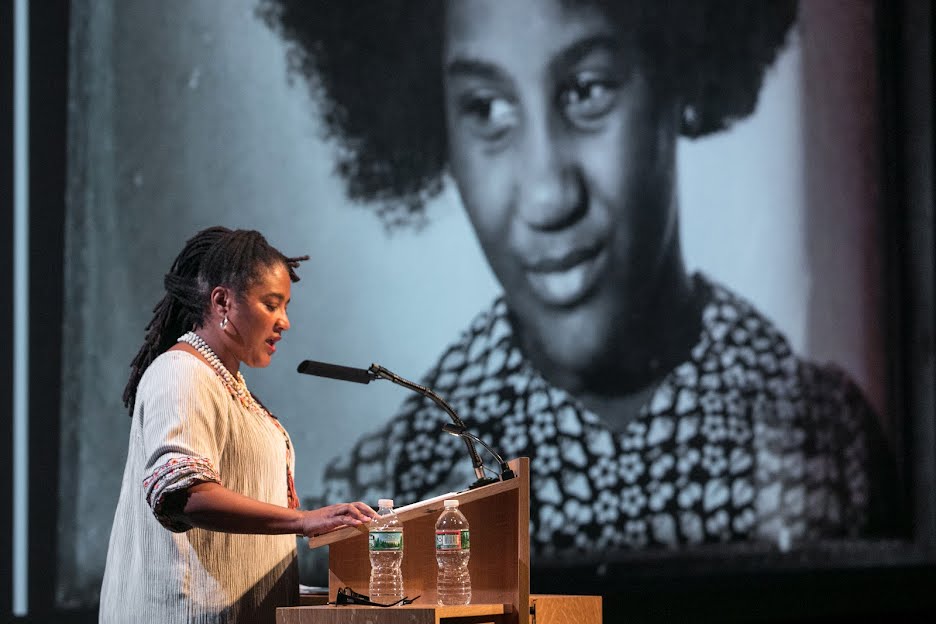 When she visited campus in early November as part of RISD’s Social Equity and Inclusion Initiative, playwright, screenwriter, producer and director Lynn Nottage took time to answer a question that she’s been fielding a lot lately: Why be a theater artist in a time of crisis?

It’s striking that a writer whose honors include two Pulitzer prizes (Nottage is the only woman to have received the award twice) and a MacArthur “genius” grant grapples with an existential question as basic as this one, but such is our current political climate. Creative professionals are taking stock of whether or not their work is bettering the world around them, and whether or not they feel it should.

Throughout her career, Nottage has used her art to reveal and elevate instances of social and economic inequity. She won her first Pulitzer Prize for Ruined, a play about the wave of sexual violence that accompanied the Congolese Civil War, and has also written plays dramatizing the garment industry, the illegal ivory trade and domestic service. For Nottage, a major call to action came in 2008 at the beginning of the financial crisis when a close friend admitted to being in economic dire straits. For catharsis and clarity, she and her friend spent some time in NYC’s Zuccotti Park talking with Occupy Wall Street protestors. The experience “forced [her] to realize that we all live within shouting distance of someone in crisis.”

Fast forward to 2011 and Nottage is in Reading, PA researching what she was beginning to understand as the “American de-Industrial Revolution.” Shuttered commercial streets, abandoned rail yards, homeless encampments in the woods and extensive interviews with citizens who “only spoke of their city in the past tense” spurred the playwright to write her second Pulitzer-winning work, Sweat. The New Yorker proclaimed it to be the “first theatrical landmark of the Trump era” when it premiered in 2016.

“As a black woman from Brooklyn, I was not expecting to be so moved by their stories,” Nottage says of the working-class men and women she got to know in Reading. “I encountered emotions that crossed racial and economic lines and would eventually become exploited by our politicians.”

What sets Sweat apart from her other plays and makes it especially relevant for art and design students is where the playwright and the Public Theater took it next: to similarly affected communities in the midwest over the course of a month-long, pre-2018 midterms tour. Beyond this, Nottage assembled a team to create This is Reading, an interactive transmedia project that highlighted the spirit of the city’s inhabitants through a program of dance, public art and social engagement—gestures of creative reparation in a fractured place.

“In times like these it’s important for artists to participate in the public discourse,” Nottage offered when asked about the distance college life sometimes places between artists and audiences. “We have to not rely solely on cultural institutions to produce our work. It’s valuable to break down some of our assumptions about where art can live.”

As the 2018 Kirloskar Visiting Scholar in Painting, Delhi-based artist Asim Waqif shared insights from a career of making art in service of the public good.