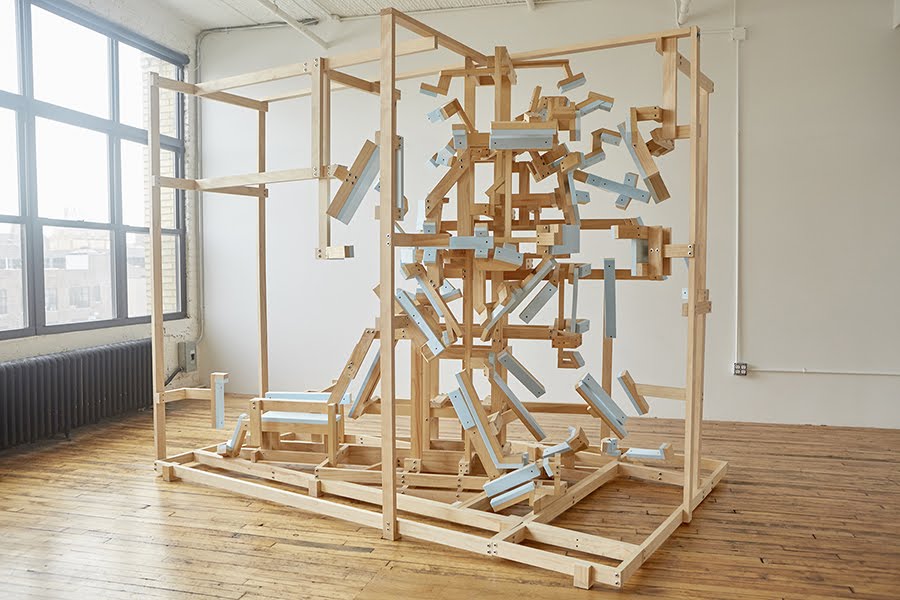 Norm Paris 00 IL, an associate professor in Experimental and Foundation Studies, finds inspiration in unusual places. At a sabbatical presentation last Wednesday (April 5), he talked about “almost-icons” he has obsessively researched—people like strongman Siegmund Breitbart, an outspoken Polish Jew in the 1920s who may have been the original impetus behind the Superman character.

Another figure that haunts Paris’ work is schizophrenic musician Roky Erickson, best known as the lead singer for the 1960s psychedelic band The 13th Floor Elevators. Like the elements of Erickson’s personality, Paris says, the pieces of the Erickson sculpture he created and then dropped from a ladder “never quite fit together again.”

Paris’ iterative series of Erickson sculptures and geodes is just one of the creative threads he followed when on sabbatical last academic year (2015/16). As a resident in the Sharpe-Walentas Studio Program in Brooklyn, he had access to a free 600-sf studio that allowed him to reflect on his artistic practice and explore notions of negative space.

Other projects focused on the sports heroes of Paris’ youth, figures captured on trading cards in the apex of their popularity before fading into anonymity. An ongoing series of reimagined sports trading cards—including a few contributions by his young daughter—have become more exploratory over time and have been shown publicly in exhibitions like Brooklyn Bridge at the Rochester [NY] Contemporary Art Center (2015) and Game On at the Children’s Museum of the Arts in NYC (2016).

“I consider myself a pop artist with a personal engagement in the subjects I explore,” Paris explains. “Again and again I find myself critically engaged with projections of strength and masculinity.”