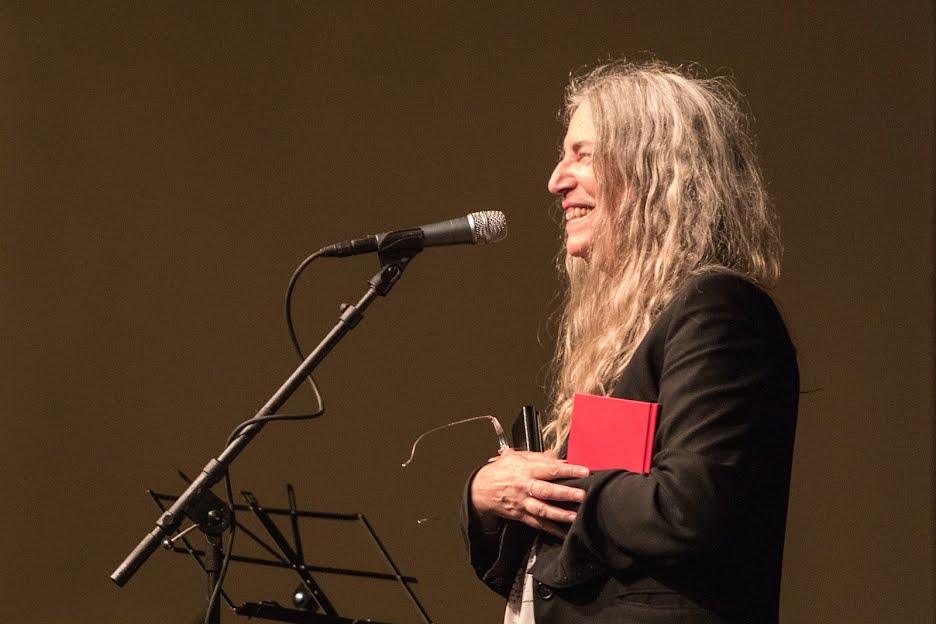 There are no signs that tell us who we are. Not a star, not a cross, not a number on the wrist. We are ourselves. Your gift comes only from you.
—from Patti Smith’s new book Devotion

Iconic author and punk rocker Patti Smith offered a mix of wit, wisdom and boundless inspiration during a sweltering, sold-out reading in the RISD Auditorium on Wednesday, September 27. She read from her National Book Award-winning memoir Just Kids (2010) and from her newest book Devotion (2017), in which she reflects on her lifelong passion for the written word.

In introducing the charismatic Rock and Roll Hall of Famer—who made a name for herself in the NYC punk rock scene in the late 1970s—RISD Museum Director John Smith aptly described her new book as “a slim but potent volume and a profound and intimate gift.” He curated Smith’s first show in America, which opened at The Andy Warhol Museum in 2002—exactly 15 years earlier to the day, as the artist pointed out once the microphone was hers.

Smith began her latest one-woman show at RISD by thanking her mother for teaching her to read despite being exhausted from working long hours as a waitress. At the tender age of eight she decided to become a writer—and she has since attempted to write every day. But she has also juggled her passions for visual arts and music, and during her presentation joked about her longtime partner and muse Robert Mapplethorpe advising her to “just pick one” discipline.

“Robert never had a doubt about his calling,” Smith said of the celebrated photographer, who died of AIDS in 1989. “When we met [in the late 1960s], I wanted to be an artist, but Robert already was one.”

Prior to her public talk, Smith met with a small group of RISD student writers, offering candid and well-considered advice about developing a sustainable artistic practice and remaining true to oneself. “If you’re an artist, you’re an artist,” she said. “You don’t have to prove it to the world.”

Smith shared her life-affirming point of view—an outlook more important now than ever as the world roils with mounting tension and intractable problems. “We need our young people to find solutions,” she noted, adding that, “It’s not so bad to [be living in very] challenging times. If life wasn’t messed up, what would we write about?”

How has the 70-year-old artist remained strong over the decades as so many of her musician friends and artistic mentors succumbed to illness and substance abuse? “I didn’t want to be like the famous people I met and admired—Jim Morrison, Janice Joplin, Tennessee Williams,” Smith explained. “I didn’t find [alcoholism] romantic. I found it sad. I love life and want to live as long as I can.”

In response to a question from the audience during a long Q&A session, Smith also mused about motherhood. She explained that the profound experience of parenthood has taught her that she and her work are not the center of the universe and having children is a privilege that requires enormous sacrifice. “But there’s nothing greater in life than sacrificing for another human being,” she added. “The greatest gift is love.”

When a young fan at the reading asked for advice for her generation, the down-to-earth Smith suggested this: “Take care of yourself, drink a lot of water and focus on your work. And don’t be afraid to feel joy. It’s OK—no, it’s essential to be happy in this troubled world.”

In May fashion designer Virgil Abloh spoke to students about his career trajectory and approach to design.