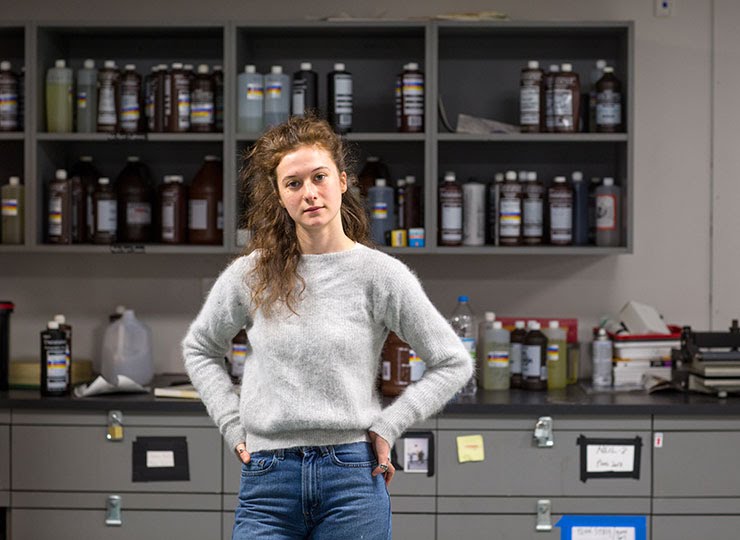 Given the prevalence of smartphones and social media in our daily lives, taking and sharing photos has never been easier or more accessible. For Natalya Kornblum-Laudi 18 PH, that’s precisely what makes now a thrilling time to study the art of writing with light.

“It’s the study of what [so many] people are making and seeing at all times,” says the junior in Photography—“a culture bombarded by images.” She is fascinated not just by the ubiquity of the medium but also by its creative potential for engaging with sculpture and other 3D media, and investigating themes like gender, intimacy and memory.

The daughter of a painter and a multimedia artist, Kornblum-Laudi began studying darkroom photography as a sophomore in high school (“simpler mechanics are better for me,” she laughs). During foundation year at RISD she studied with faculty members Nikki Juen 90 GD and the late Nade Haley, teachers who encouraged her to think about her work from a feminist perspective. “That was something I had always been drawn to but also pushed away,” she recalls, “but [the two of them] propelled me to make the art I do now.”

Since beginning her major sophomore year, Kornblum-Laudi has enjoyed building close bonds with her peers and working with mentors like Senior Critic Thad Russell MFA 06 PH. “Thad was the perfect instructor for Sophomore Studio. He made me relearn a lot about how I work, but he’s also so supportive.”

During spring semester last year, Kornblum-Laudi began working on a core body of work that is proving transformative: a series of nude self-portraits that explore the fluidity and complexity of selfhood. She began the series in a studio called Family Album, eliciting mostly positive feedback from both her peers and Photography Critic Jo Sittenfeld MFA 08 PH. But when a vocal minority expressed discomfort—which came as a surprise given the artistic sophistication of most RISD students—instead of backing off, Kornblum-Laudi resolved to double-down and make “self-portraits that were really unapologetic and weren’t in conversation with anything else.” In essence, she says, the new work was “critiquing and challenging the people who were critiquing me.”

While she now admits that her confrontational approach became “exhausting,” Kornblum-Laudi is happy to be struggling with her self-portraits in a sustained way. Her experience in that studio also provided an important reminder to balance an openness to input with a commitment to principles. “Every single opinion is valid, but that’s also horribly frustrating. It sucks. I think you just have to talk to people you trust and stay open to what people say, but also know how to ignore them enough to keep working.”

After stepping back last summer to focus on non-photographic work – including “embroideries of Botticelli paintings, getting back to my Waldorf [School] roots,” she laughs – Kornblum-Laudi has since found new ways to portray the literally and figuratively exposed self. In one series, she chronicled a breakup through hazy, nostalgic snapshots that show bodies in fragments; and in her current work she combines self-portraiture and sculpture to explore a relationship between femininity and vessels – a trope she has identified in paintings by such historic masters as Vermeer, among others.

At RISD Kornblum-Laudi loves feeling inspired to explore new territory, whether shooting in digital or color for the first time or venturing beyond her comfort zone as a fine artist. During Wintersession she and a high school friend (a fellow photo major, but at Bard College) began a photojournalism project about “flip counties” – clusters of small towns stretching from Pennsylvania to Iowa that helped sway the results of the 2016 presidential election. They photographed and interviewed voters across political parties and ideologies about what guided their decision and why they’re skeptical of globalization and angry over the disappearance of good jobs in the Rust Belt.

At least for now, Kornblum-Laudi and her collaborator plan to keep private the photographs they took during their field research, but the experience was a great opportunity to diversify and enrich her studio practice. “I don’t want to get stuck in a particular groove while I’m here,” she says. “I want to explore as much as possible.”

At a final critique in May, sophomores in Photography impressed faculty and guests with sophisticated new work.