New Furniture Design faculty member Patty Johnson collaborates with master craftspeople around the world, exploring how objects are transformed by material and culture. 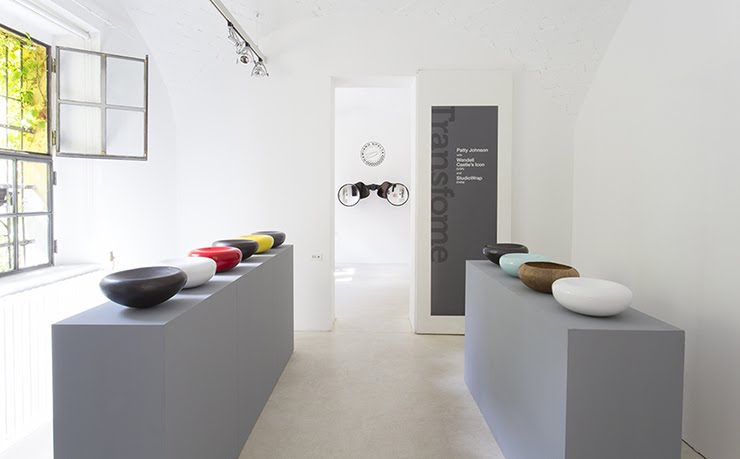 Now that she has joined the RISD faculty, newly hired Assistant Professor of Furniture Design Patty Johnson says it’s “the best professional decision of [her] life.” The Canadian designer, who previously taught in the Industrial and Interactive Design department at Syracuse [NY] University, has been following RISD furniture makers since studying with the late Donald Lloyd McKinley at the School of Crafts and Design (now Sheridan) outside of Toronto.

Johnson describes her pedagogical approach as equal parts theory and practice. “I’m interested in how design and craft relate,” she notes, adding that “issues of sustainability and material culture” are also top of mind.

For instance, in a recent project Johnson showed at the Rossana Orlandi Gallery in Milan (see top photo), she explored how objects are transformed by place and process. Working in four completely different settings, she created four versions of the same double-sided bowl. One was generated on a factory CNC machine, another created by master brass workers in Rajasthan (India), a third made of fiberglass and a fourth using tobacco and papier mâché techniques developed in Haiti.

“Understanding material technique in great detail makes you a better designer,” Johnson says. “If you’ve made things yourself, the world opens up to you in [unpredictable] ways. That deep understanding is essential to my own practice and has made my work much richer.”

For the past decade or so Johnson has been partnering with master artisans around the world in an attempt to build economic capacity through design and craft. In her ongoing work in Barbados, for example, she’s working with furniture makers on new models of production that will allow them to tap into the local hospitality industry by providing furniture for hotels and restaurants.

“I’ve built a methodology around this kind of international work,” says Johnson. “There are so many obstacles to bringing a product to market. By analyzing where the problems are and what typically goes wrong on these projects, we can find ways for craftspeople to keep doing what they do while also making a living at it.”

Johnson has worked in large-scale furniture production as well, designing mostly wooden furniture for companies like David design in Sweden, Mabeo in Botswana and Toronto-based furniture manufacturers Keilhauer and Nienkamper. She has been involved in the Salone Internazionale del Mobile in Milan as well as winning four Editor’s Awards for collections debuted at the International Contemporary Furniture Fair (ICFF) in New York City, and she hopes to use those connections to benefit RISD students.

“The international nature of the furniture business raises a lot of possibilities for cross-cultural learning,” says Johnson. “RISD gets the best students in the world, and a lot of them are interested in the social aspects of design.”

Currently working with Furniture Design seniors and grad students, Johnson relishes the intellectual challenge. “These students are so bright and talented,” she says. “I’m really enjoying the level of exchange that goes on in RISD’s studios.”