Thanks to generous support from Hasbro, local high school students benefitted from the opportunity to explore the possibilities of toy and game design at RISD. 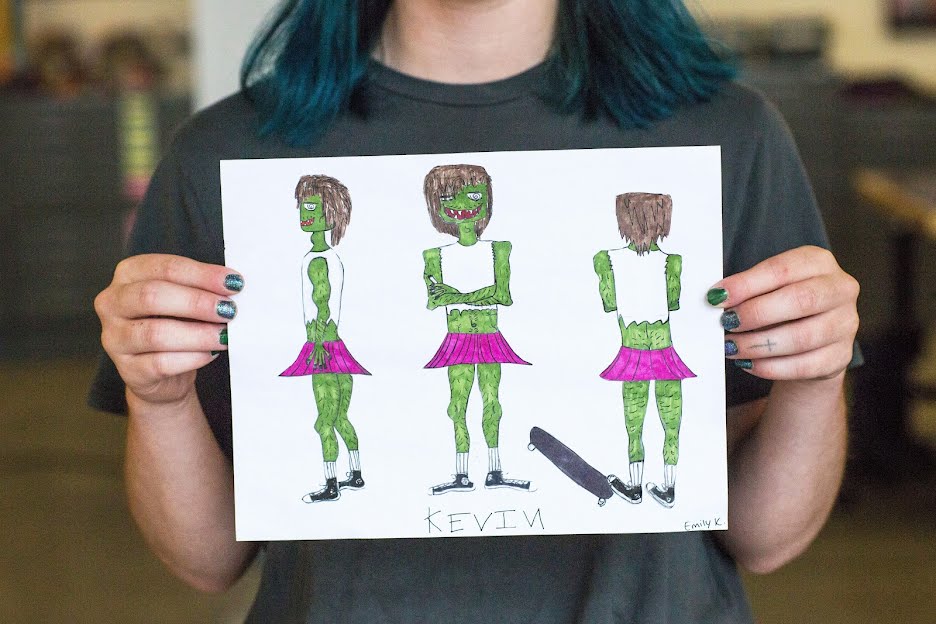 “I actually don’t think my action figure is possible yet,” admitted POD student Malitey Mullings about her idea for a toy that projects a 3D hologram of a character inspired by Hasbro’s TRANSFORMERS brand. For the aspiring screenwriter, Playful Connections proved to be a great opportunity to learn from professionals and peers who pushed her thinking in unexpected directions. Other students noted that the studio helped them branch out into 3D making and learn how to express their creativity within a set framework.

“We want to reframe the way the students look at art,” says Kelcie Marquardt, one of three designers from Hasbro who volunteered their expertise during the workshop. The designer emphasized core design-thinking concepts during a session on branding.

Playful Connections is one of a series of initiatives made possible by a new $46,500 commitment from the Hasbro Children’s Fund, the company’s grant-making arm. As Hasbro’s largest grant to date in support of RISD programs, it reinforces the Rhode Island-based company’s interest in nurturing homegrown design talent and contributing to the health of the local economy. The new funding has provided scholarships for POD participants Abenda Sohn, a student at Alvarez High School in Providence, and Molly Brown, who attends the Jacqueline M. Walsh School for the Performing and Visual Arts in Pawtucket, to attend RISD’s six-week Pre-College program this summer.

Additionally, Hasbro welcomed POD graduates to apply for paid internship opportunities, and Elijah Faris 19 IL, a POD alum now attending RISD is interning at the company’s Pawtucket headquarters. In addition, these funds will support Design Discovery sessions during which Hasbro employees will discuss careers in the creative sector with POD teens and their parents or guardians. Hasbro employees are given four hours of paid time off each month to volunteer with organizations and projects that benefit children through Team Hasbro, the company’s volunteer program.

“Hasbro’s support provides our teens with an extraordinary set of opportunities,” says POD Director Paul Sproll, who also heads RISD’s department of Teaching + Learning in Art + Design (TLAD) and is especially pleased that the solid new backing from Hasbro is being reinforced by a $15,000 ArtWorks grant from the National Endowment for the Arts and a renewed two-year commitment of $100,000 from The Angell Foundation. Collectively, this funding from diverse external sources shows a strong endorsement of POD’s mission.

For Playful Connections, Marquardt and Hasbro colleagues Aaron Gray and Scott Dean joined POD instructor and TLAD alum Christine Enos MAT 14 in discussing how concepts for games and action figures move through the design, engineering and branding stages. Participants also responded to daily challenges and, at the end of the week, presented their final prototypes to a small group of visiting critics from RISD.

“The students have been just extraordinary,” Sproll notes while leafing through colorful sketches of characters influenced as much by personal experiences as anime and manga comics. “They’re drawing from their own world and lives. It’s just really, really extraordinary.”

“I never thought I could design a toy or a game before this week,” notes Daianira Furtado, a recent graduate of Tolman High in nearby Pawtucket. “But I feel like I can do that now,” she says with a sense of pride following a coaching conversation with Marquardt, who emphasized how essential it is to invest passion in creative work—especially when working according to established guidelines.

In engaging with Hasbro’s design team, Sproll observes, POD students were able to “extend their own creative vocabulary”—and to see a potential career in art in design as a real, achievable goal. “They’re beginning to think: ‘I can become a designer,’” he says. ‘This is a world I can enter.’”

Having earned her undergraduate degree at RISD, Project Open Door alumna Sara Pollard 13 IL/MAT 14 is now pursuing a Master of Arts in Teaching and looking forward to becoming an art teacher.