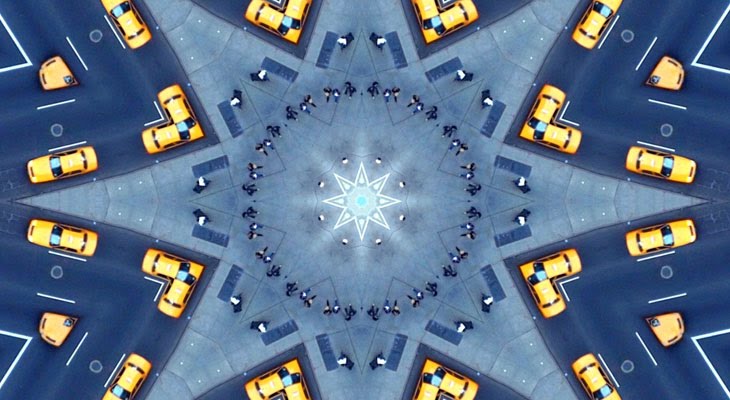 Naturally attracted to both math and painting,Anne Morgan Spalter MFA 92 PT has always combined left- and right-brain thinking. She started out as a painting major at RISD, but transferred to Brown once she maxed-out on the number of math credits that would count towards a RISD BFA. Several years later, after completing a triple major at Brown in Mathematics, Visual Art and Independent Studies, she returned to RISD as a graduate student and taught several courses. She continues to be involved with the school through her husband and fellow digital art collector, RISD TrusteeMichael Spalter.

Now, Anne Spalter is having her first solo show in New York City, which runs from December 8 through January 6 at Stephan Stoyanov/Luxe Gallery on the Lower East Side. CalledTraffic Circle, the exhibition features a series of geometrically patterned “video paintings” generated from footage shot in traffic – from the vantage point of high-rises and airplanes.

“The series is a continuation of my previous work on technological landscape environments, from skyscrapers to multilane highways,” Spalter says in her artist’s statement. “I have had a longstanding interest in the landscape genre and its ability to reflect the Zeitgeist and the social and technological state of human affairs,” she adds. “I am continually photographing objects we often take for granted – telephone poles, street lamps, highways, smoke stacks, factories, Ferris wheels, traffic circles. Whether I am using a camera or a pencil, this focus helps increase my awareness of our environment.”

A new media pioneer, Spalter taught the first computer-based fine arts courses at RISD and Brown in the 1990s and went on to become an artist-in-residence at Brown’s renowned Computer Graphics Research Group, where she worked with or was advised by a number of computer science and humanities luminaries. Recognizing the computer as “both an evolution and revolution in the history of art,” she also wrote the widely used textbookThe Computer in the Visual Arts. In 2008 she opted to leave Brown to pursue her own studio work full time.

Since then Spalter’s work has been acquired by such well-known art spots as the Albright-Knox Art Gallery in Buffalo, NY and the Victoria& Albert Museum in London. It has been added to renowned private collections in the US, Europe and the Middle East, and covered in publications ranging fromTheNew York Times to USA Today. Given her interest in Islamic art and the inspiration she has derived from visits to the Gulf region, last summer Dubai ran a feature on her in supplements to the International Herald Tribune (worldwide), The Guardian (UK), Le Figaro (France) and Suddeutsche Zeitung (Germany).

Spalter’s solo show in New York marks an important milestone in her ongoing interest in integrating art and technology, she says. By carefully studying Islamic art and using “a symmetrical kaleidoscopic framework to bring order to visual complexity” in her video paintings, she is able to combine both sides of her brain as she works to “fuse ancient and modern, and Eastern and Western compositional strategies to simultaneously represent both inner and outer modern landscapes.”