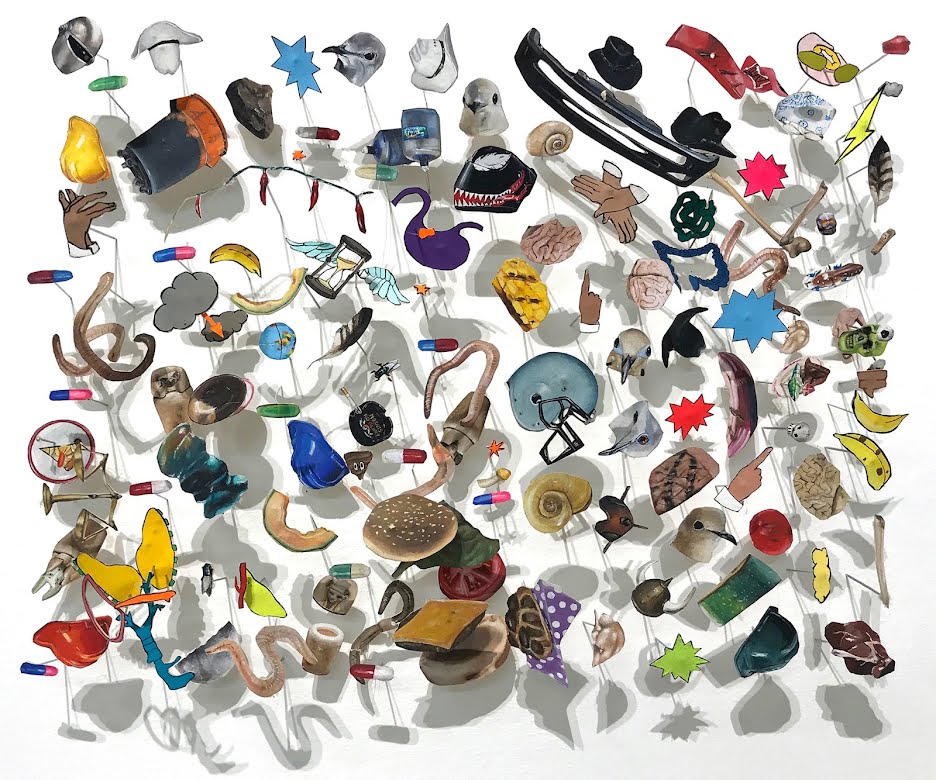 Rachel Grobstein MFA 13 PT appreciates the dimensionality and shadow that are created when she pins collections of miniature objects to the wall.

Brooklynite Rachel Grobstein MFA 13 PT headed west last fall for an artist residency in Roswell, NM because she “wanted to engage with the sky and stars.” In her related solo exhibition at Roswell Museum and Art Center—which ran from mid November to early January 2018—she presented a series of mini bedside tableaus (or “collections of junk,” as she puts it) along with painted cut paper miniatures mounted on the walls with pins to create tiny constellations of objects.

“The work began with space mythology and my obsession with space junk,” says Grobstein—“defunct satellites and rockets collecting in our atmosphere almost like floating landfills.” Unlike the space junk swirling around out of sight, however, the artist’s miniature tableaus compel viewers to reconsider everyday objects that are commonly overlooked.

“I’m interested in the way these collections create complicated portraits speaking to everything from dreams and sex to memory and self-maintenance,” says Grobstein. “[The work] engages with the tradition of still life, cataloguing a world of repetition, consumer culture and routine.”

Grobstein’s creative interest in people’s junk and what it says about them dates back to the beginning of her MFA studies at RISD, when she performed a standup comedy routine about the contents of her kitchen drawer. “The assignment was part of a first-semester grad seminar on drawing taught by [Associate Professor of Painting] Kevin Zucker 00 PT,” she recalls. “I thought a monologue about birthday candles, magnets and packets of soy sauce would be funny, but it ended up being kind of profound.”

She also remembers her first crit with Painting Professor Dennis Congdon 75 PT, who remained “completely silent for a very long time” while studying her paintings. “I had never before experienced that quality of high-intensity attention,” she explains.

Even then Grobstein was working small, creating “tight, meticulous miniature paintings on paper.” That scale, she says, requires making tough decisions about what to include and what to leave out, “forcing you to become an essentialist.”

Since graduating, Grobstein has begun working in gouache and making more sculptural work she describes as “2.5-D”—reflecting her growing interest in dimensionality and shadow.

In her practice as well as her work teaching and mentoring teenage artists in NYC, Grobstein still finds herself “actively negotiating conversations [she] had in grad school.” Though she applied for a couple of residencies while still at RISD, she has since learned to make a consistent, concerted effort to uncover new prospects—and to take rejections in stride. She’s especially attuned to opportunities that can “change the whole ballgame,” as has her current residency in Roswell.

“I’m taking tons of photos and soaking everything up before I go back to New York in April,” Grobstein says. “I’m constantly making associations with places and things I’ve seen in the past and bringing them into play in new work.”

Case in point: roadside memorials, which she has encountered throughout the southwest. “They’re a form of folk art,” Grobstein says. “People pile up plush teddy bears, colorful fake flowers, seasonal decorations … building these insane, beautiful accumulations of stuff that paint portraits of the people who died there.”