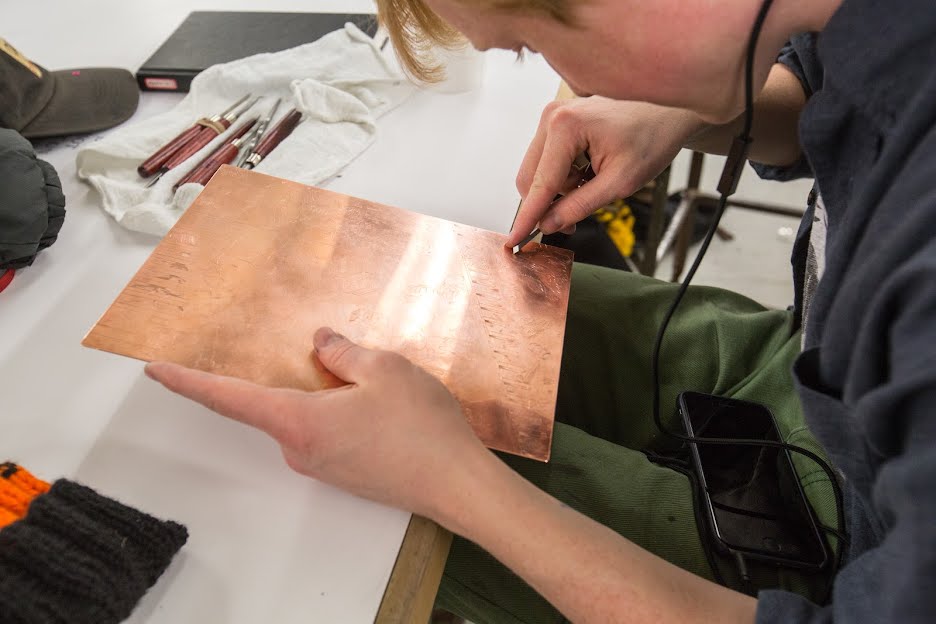 Printmaking has given Henry McClellan 18 PR an ideal framework for creating visual narratives on his own terms.

When Henry McClellan 18 PR shifted his major to Printmaking last Wintersession, he discovered an easy synergy between the discipline and his lifelong passion for visual storytelling. “As soon as I got into the major,” says the former Illustration student, “I found myself wanting to make work that was illustrative—but in my own way.” He feels best when he’s combining, manipulating and subverting media, and in Printmaking the rising junior has found the ideal framework for creating visual narratives on his own terms.

A creator and avid reader of alternative and independent comics, McClellan is rarely far from a sketchbook—and hasn’t been for many years. “My grandparents bought me sketchbooks for every birthday, so I just had them, always—and was always drawing. I’m still the same way.” As the native of Oakland, CA was growing up, if he wasn’t drawing on paper, he was making claymation films and animated shorts. In other words, his parents “always encouraged art more than other things.”

At RISD McClellan has found a place to explore a diversity of approaches to making, starting during his “whirlwind” Foundation year. “It was the first time that I decided to take myself really seriously as an artist,” he says—a formative time that helped him discover “a process where I work really hard but know my limits. I like to push myself but I also know how much fun I like to have and how much is healthy for me.” He’s especially thankful for the guidance of Experimental and Foundation Studies faculty members like Paula Gaetano-Adi, who encouraged him to open up his process and think more conceptually.

“I made my best work within that [concept-oriented] mindset,” McClellan says, noting that most students in Printmaking seem to be similarly driven. “Most want to subvert the medium and explore other media, to go in and out of making prints and [take time to] explore themselves as artists.” During his first full semester in the department, he took studio courses with a trio of Printmaking professors—Daniel Heyman, Andrew Raftery and Department Head Henry Ferreira—whose diverse expertise and emphases have inspired him to further explore interdisciplinary possibilities.

For Ferreira’s Waterbase Silkscreen I studio, McClellan learned a technique that allows him to create a digital animation of silkscreen prints. “I decided to exploit the fact that [silkscreen] can be done so quickly,” he explains. “I thought that Henry was going to hate [the concept], but he really liked it.” And in Heyman’s course on woodblock engraving, McClellan pushed his work into increasingly conceptual territory. Noting that “Printmaking is one of the most open majors at RISD,” he says he’s happy to have landed in the department since it allows for a broad-based approach to making art.

That uncompromising commitment to quality of craft, conceptual exploration and an openness to innovative processes is now central to how McClellan works. This fall he’s looking forward to making work that incorporates comic book and animation aesthetics and appeals to both fine artists and the general public.

McClellan’s renewed interest in animation has caught him somewhat by surprise, but he says such interdisciplinarity is encouraged in the department. “Printmaking is so fruitful because it’s a technique and a method that’s never going to be outdated. You learn a broad range of techniques that can be applied to any other practice. Printmaking is about physical production and self-publishing as a whole.”

For McClellan, the DIY ethos of printmaking is inextricably tied to what printmakers produce and the people they make work for, a relationship he finds very inspiring. “The printed object is such an important part of youth culture, it’s so much a part of musical culture and contemporary aesthetics—it’s how people see things in public. Printmaking is such a public art form. I love that.”

After graduating from both RISD and Brown, Hannah Koenig BRDD 14 is adept at bringing art and design to unexpected places.