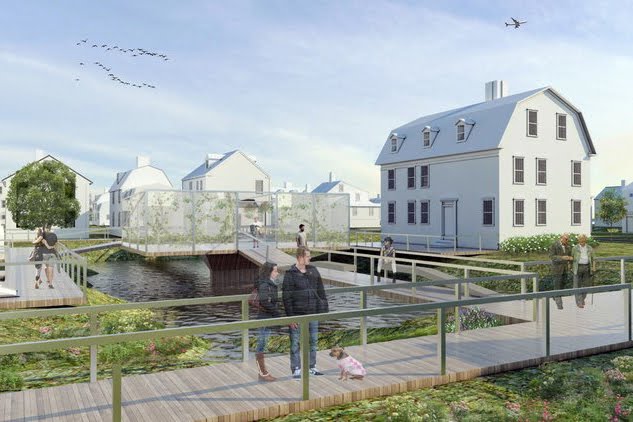 At a public event on Friday, May 26 in Newport, RI, Interior Architecture grad students will use state-of-the art augmented- and virtual-reality technology to present futuristic visions of Newport’s historic Point neighborhood, which is increasingly threatened by the effects of climate change. Developed for the adaptive reuse studio Projecting Change, their designs balance radical revision with the preservation of local heritage.

The project continues the department’s ongoing partnership with the van Beuren Charitable Foundation, a Newport-based nonprofit dedicated to protecting the island city’s cultural and architectural character. Student proposals expand on recent work by the Newport Restoration Foundation about the impact of rising sea levels.

The designers realize that community members might push back against the radical nature of the proposals but hope that the use of platforms like Oculus and Google Cardboard in their presentations will provide a fun layer of engagement. “The public can ‘try on’ an inundated Bridge Street in 2035,” the studio leaders write, “with the luxury of retreating to the Bridge Street of today.”

At a preliminary crit earlier this month, students received valuable feedback from the RISD community about their proposals. In commenting on a plan to integrate rising water into a shared pubic space, architectural historian Iljal Muzaffar urged designers to acknowledge the importance of the sea in local history—a point many faculty critics stressed.

Another design proposes to lift the foundation of the entire neighborhood while leaving houses intact, ultimately leading to a “blue community” connected by pedestrian bridges (above). “The idea,” says Eder Romero MA 17, “is to avoid flooding without altering the essence of the community.” Overall, the designer notes, the project’s combination of environmental research and software application provided participants with invaluable professional experience.

Interior Architecture sophomores redesign a group residence for men recovering from drug addiction and the hardships of homelessness.

As RISD’s first-ever winner of a prestigious Angelo Donghia Foundation scholarship, Madison Kim BRDD 17 IA is feeling on top of the world as she wraps up degrees at both RISD and Brown.