Graduate student Anina Major MFA 17 CR sees her ceramics practice as an expression of her commitment to furthering cultural tradition and making a positive impact on the world. 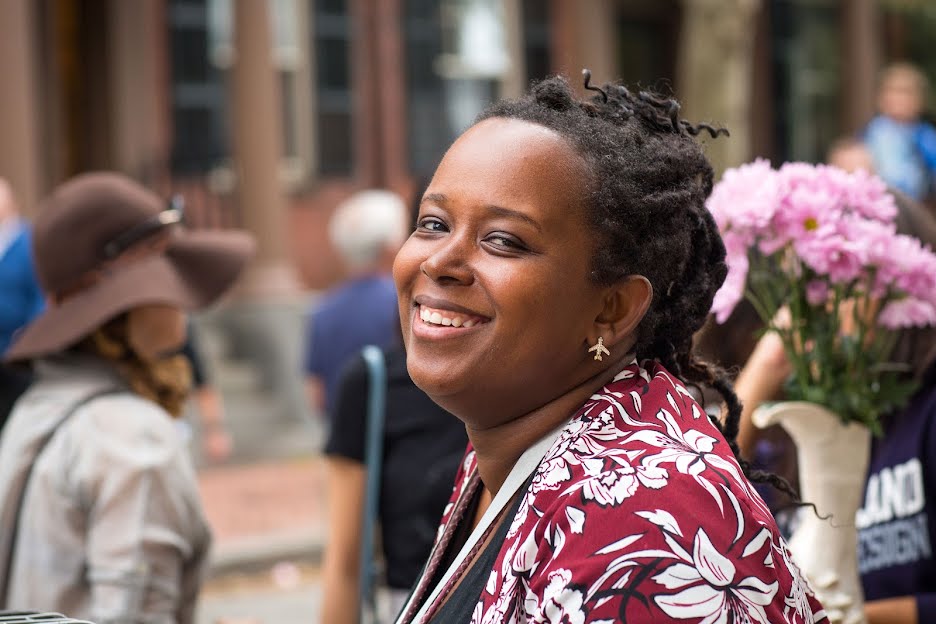 After several years of working in graphic design, Bahamian-born grad student Anina Major MFA 17 CR returned to school as a fine arts major eager to inspire others with what she has discovered through the act of making. Technically speaking, her current work combines weaving with the creation of clay objects, but the ceramist is still motivated by the same desire to communicate that drew her to graphic design.

“Art is a vehicle for dialogue,” says Major, who makes time to work in the RISD Writing Center and contribute to the our.risd blog when she’s away from the studio. And though the written word is no longer prominent in the finished product, writing—and the desire to speak that moves people to write—is still central to her process.

“Writing helps me to clarify my thoughts in a way that helps me make decisions about materiality, technique and the message I want to convey through a piece,” Major says. In fact, she sees her role as a black, female artist from outside the world’s core art centers as a statement in itself. “At a time when inclusivity matters so much, I am inevitably contributing to that discourse,” she says, embracing the opportunity to do so.

Major grew up in Nassau among a family of makers and began her undergraduate experience at The College of the Bahamas, where she studied with RISD alum John Cox 95 IL/MAT 96, a mentor whose contemporary aesthetic stood in stark contrast to the traditional styles that dominated the island’s arts landscape. His work and educational background inspired her to advance her own art and design studies in the US.

After earning a bachelor’s degree in graphic design from Drexel University in Philadelphia, Major went on to work in the field before being drawn to clay almost a decade ago. In 2012 she decided to act on that attraction by relocating to NYC, where she rented a studio in the same Harlem space as prominent artists like Sanford Biggers and Renee Cox. “And then I just started working!” she recalls of the burst of creative energy she felt at the time. But it wasn’t long before the artists in her circle urged her to not just make work but also share it as widely as possible—and to consider honing her craft through a graduate program in fine art.

In researching schools, Major reflected on the other Bahamian artists who had attended RISD, like glass artist Tavares Strachan 03 GL, John Beadle 89 PT and her mentor Cox. “I thought about where I would fit and feel the most comfortable… if graduate school was to be worth it, the school needed to be the best for me.” Now in the second and final year of the Ceramics MFA program, Major is thriving as she pursues her interests in “methods of making that uphold tradition and ritual, and how [those methods] contribute to forming one’s cultural identity.” This focus encompasses all aspects of making—from materials and technique to the intended purpose of a finished object.

“There are ideas and traditions that are becoming lost over time, so I’m looking for ways to make those things anew,” says Major—“not as a way of mimicking the past, but as a way of involving the past in the present and nodding back to it [through my art].” As she pursues this, Professor Larry Bush and Department Head Katy Schimert have provided valuable insights into craft and concept.

“The faculty are engaged and want us to succeed,” Major says, noting that she loves their commitment to advancing a medium “with a long history and a lot of rules.” Rather than preserving those rules, however, RISD faculty members are more interested in pushing beyond them to make innovative breakthroughs—a goal that suits her experimental inclinations perfectly. “I’ve learned so much here about the form, about its chemical makeup,” she says. “I don’t take shortcuts anymore. My mind has moved beyond that.”

Looking ahead, Major may apply for residencies this spring, but when she started grad school, she also made a conscious decision not to think too much about next steps. “This was the first time in my life that I allowed myself to not think about where what I’m doing now will lead me two, three years from now. I want to stay in this moment.”

Assistant Professor of Ceramics David Katz revels in the resources, community and mix of disciplines he’s discovering at RISD.

An exhibition at the Sol Koffler Graduate Student Gallery showcases the diversity and depth of voice found within RISD’s graduate community.

In the opening show of the year at Sol Koffler Graduate Student Gallery, curator Maya Krinsky MFA 14 PH presents work that wrestles with the complexity of language.