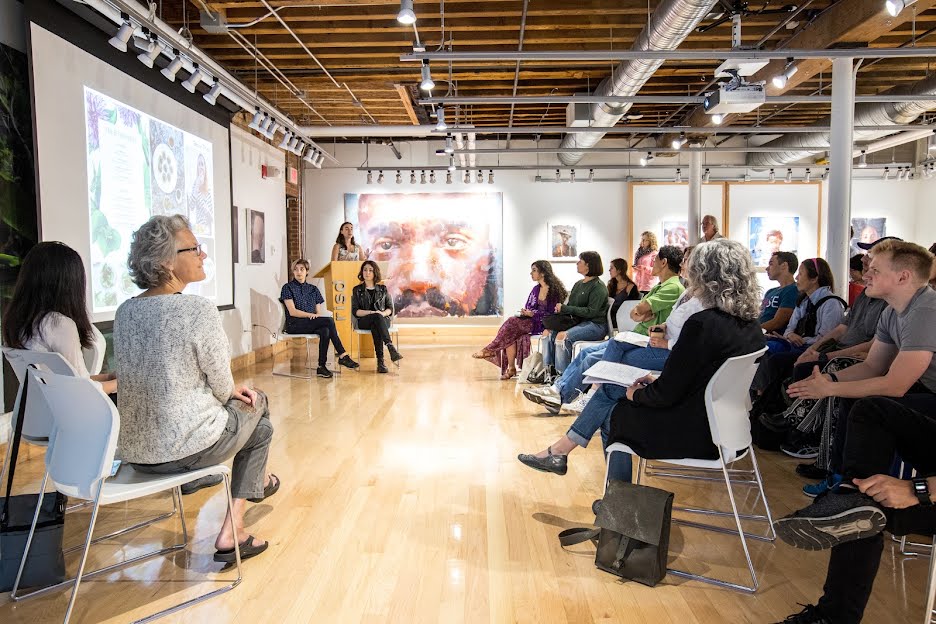 A panel discussion during RISD Weekend 17 focused on the work recent alumni have been doing in support of ecology and conservation.

For recent alumna Emily Schnall 16 IL, nature, science and art have always been interconnected. Her first animal sketches as a child were inspired by nature documentaries she watched on TV, and she started volunteering at the Academy of Arts and Sciences in Philadelphia while she was still in high school. Although she was fascinated by the enigmatic specimens filed away in the Academy’s drawers, the most satisfying part of the experience turned out to be sharing that fascination with non-scientists who visited the museum.

Schnall is one of four young alumni who participated in Science in the Studio, a RISD Weekend panel discussion sponsored by the Illustration department and moderated by HPSS lecturer, zoologist and veterinarian Lucy Spelman. In introducing the panelists, she wondered aloud why the world’s animals are the responsibility of so few people. In 2014 she launched a nonprofit called Creature Conserve with the mission of visually communicating the complex issues of conservation to a broad audience.

“Artists have always been interpreters of our time,” says Spelman. “Through their eyes, the science of saving species and the importance of taking a one-health approach to conservation becomes accessible, meaningful, relevant and the source of positive change.”

Founding Creature Conserve artist Chloé Bulpin 15 IL also took part in last weekend’s panel discussion. Now based in NYC, she was drawn into an ecologically focused practice while she was studying at RISD and was inspired to create The Bug Banquet—a gourmet five-course meal highlighting insects as a source of sustainable protein—for her senior degree project.

“Food is important to most people,” Bulpin noted during the discussion, so it’s a good way to introduce ecological concerns to a new audience. She encourages current students who want to weave science into their practices to build a focused portfolio, make personal connections and “be proactive about reaching out to organizations whose missions interest you.”

Bulpin’s co-panelist Sarah Sun 16 FAV has also been focusing on insects, but from a very different angle. Swarm, the beautifully animated short film she made for her degree project, provides an intimate view of what happens when climate change kills off the natural predators that keep locusts and other crop-eaters in check.

“I’m very concerned about the influence of climate change on biodiversity,” says Sun. “I’m making work that helps viewers think about our relationship with other animals.”

With Swarm having been screened at 34 film festivals around the world, Sun is currently in the master’s design program at Harvard considering new ways to use educational films outside of classroom settings and also expanding her skills beyond filmmaking.

Sun notes that it’s important to customize your visual message for each specific audience, and new grad Rae Whiteley 17 IL concurs, noting that the key to becoming a successful illustrator is “knowing your audience.” The summer between junior and senior year, a five-week internship at Mystic Aquarium in Connecticut enabled the artist to communicate to visitors the intense bonds that form between animals and aquarium staff members.

Whitely encourages students interested in tapping into their love of science to consider doing a RISD concentration in Nature–Culture–Sustainability Studies (NCSS) and to use social media as a way of developing a reputation in the field.

The NCSS concentration (much like a minor at other colleges and universities) opens the door to science-related courses at Brown and at RISD. “At RISD, we focus primarily on the natural sciences,” Spelman explains, “tailoring classes to serve artists and designers who are also passionate about science.”

Seven students traveled to the steamy Caribbean nation of Guyana during Wintersession as part of RISD’s South American travel course Exploring the Art + Science of Biodiversity in Guyana.

Close Encounters at the Aquarium

An internship at Mystic [CT] Aquarium gave Rae Whiteley 17 IL an opportunity to capture the emotion behind inter-species communication.