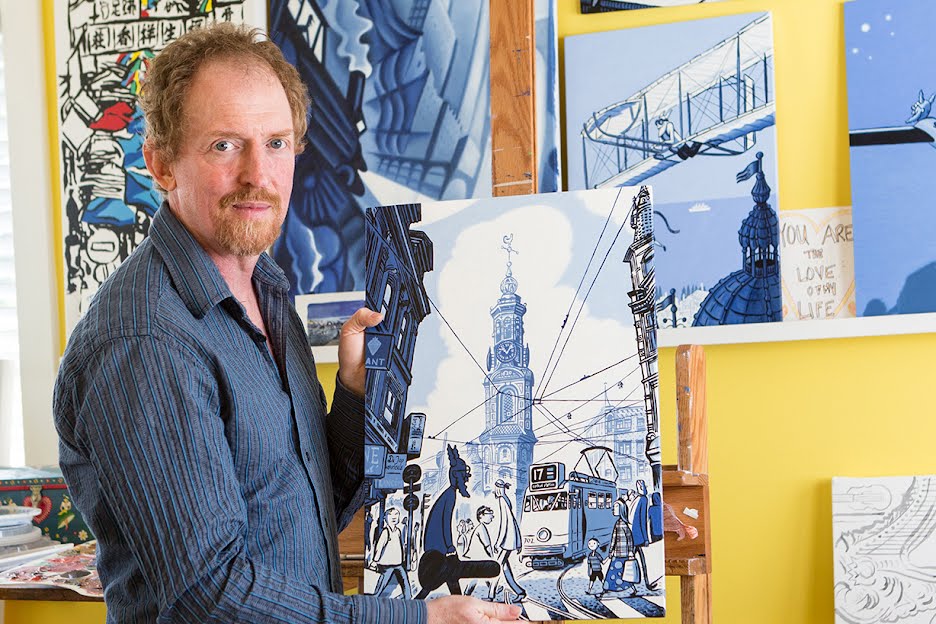 Illustrator Michael Sloan 85 IL has earned a 2018 Pulitzer Prize for his work on Welcome to the New World, an editorial cartoon series about Syrian refugees.

Illustrator Michael Sloan 85 IL was elated when he learned that Welcome to the New World—the 20-part editorial cartoon he and writer Jake Halpern co-created for The New York Times Sunday Review—has been awarded a 2018 Pulitzer Prize. The powerful series tells the true story of a family of Syrian refugees adapting to a new life in the US.

“Welcome to the New World expresses understanding, compassion and tolerance—values that are very important to me,” Sloan says. “I hope that readers of the comic have a better understanding of what refugee families go through: the enormous obstacles, the grief of leaving family behind, the challenges of starting a new life in a foreign country. Like most people, they are looking for a better, safer life for themselves and for their children. I think we all have more in common with refugees than we realize.”

The project began when journalist Jake Halpern approached New York Times editor Bruce Headlam about following two Syrian brothers and their families as they adjusted to their new lives in America. When the editor suggested that he tell the story visually, Halpern reached out to Sloan, who has been freelancing for the Times since the early 1990s and lives in the same town as Halpern in Connecticut.

“We hit it off right away, both personally and professionally,” Sloan says. Process-wise, Halpern met with the families regularly, wrote and fact-checked the script for each comic and then vetted it with his editor. Once each script was final, it went to Sloan to create the artwork.

“I would sketch the panels and submit them and then move forward to final art after they were approved,” says Sloan, “inking on paper and adding color in Photoshop.” The process, he adds, is very familiar to him and similar to other illustration assignments with quick deadlines.

Perhaps it’s the simplicity of the drawings and the dearth of dialogue that makes the work so strong and universally relatable. Halpern notes that some of the most powerful moments in the series are frames with no words at all. “It’s a great medium to work in—accessible and rich with possibilities,” Sloan adds. The two are now developing Welcome to the New World as a graphic novel for Metropolitan Books.

Sloan appreciates the many opportunities he has had from the Times going as far back as former Book Review Art Director Steve Heller, who gave him his first break as an illustrator in 1989. “My path in life would’ve been very different if I hadn’t made an appointment to show my portfolio of prints and drawings to Steve shortly after I moved to New York City,” he explains. “Steve taught me how to be an illustrator.”

Sloan’s illustrations have since appeared in The Washington Post, The New Yorker, The Wall Street Journal and The Boston Globe, among other nationally recognized publications, and his artwork has been awarded three silver medals from the Society of Illustrators in NYC. He also draws the Zen of Nimbus comic, paints in oil and plays bass with The Half-Tones, a jazz band with fellow illustrators.

At RISD Sloan began as an Architecture major before discovering illustration and printmaking, and says he was most influenced by professors Mahler Ryder (who died in 1992), Dagmar Frinta, Randa Newland and Cornelia McSheehy, current head of Printmaking. “I was so inspired by the work that other students were doing around me in different mediums and different departments,” he recalls, “and it constantly pushed me to improve and develop my own work.”

Sloan learned as a student that it’s important to find mentors and also to be open to new paths and directions. “A chance mistake in the etching studio or meeting somebody on a street corner can be a life-changing experience if you’re open to it,” he says. “I developed that spirit of curiosity at RISD and I’ve tried to carry it with me ever since.”