RISD Cycling co-captains Lizzie Wright 18 ID and David Kessler 18 ID inspire others to work towards their own goals and find joy on the journey. 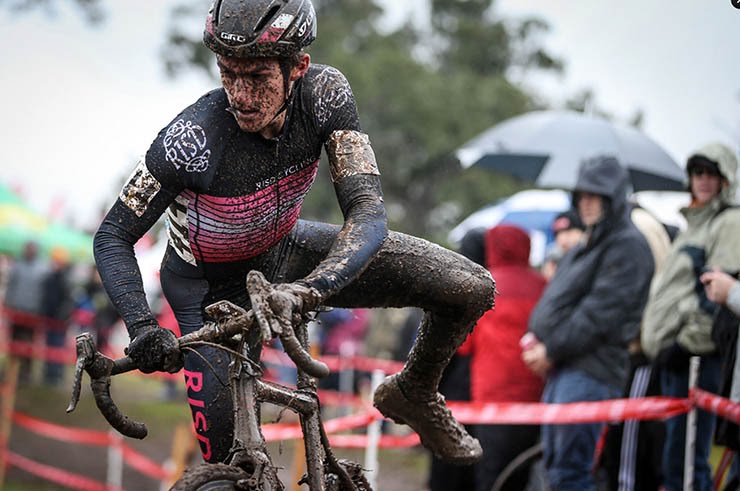 Though they’re now riding together, RISD Cycling co-captains David Kessler 18 ID and Lizzie Wright 18 ID found their passion for racing on separate and very dissimilar paths. For Kessler cycling has been an indispensable part of his life ever since his father introduced him to the sport 10 years ago.

“It started as this fun thing for my dad and me to do… and then one thing just led to the next,” he recalls of his rise from casual riding to a junior national championship in 2009 and two years of professional racing before transferring to RISD two years ago. Wright, on the other hand, trained in a pre-professional ballet program for much of her childhood and didn’t start biking competitively until she joined RISD’s only intercollegiate sports team during Foundation year.

“It snowed so much that year,” she remembers, “that I had to learn to ride a road bike on an indoor trainer. But when I finished my first race I just loved it.” In under three years she has climbed from the Women’s D field—the entry-level collegiate ranking—to compete at the elite A level.

Last weekend (April 28-30) both Wright and Kessler raced in the 2017 USA Cycling Collegiate National Championships in Kessler’s home state of Colorado, following a string of recent successes in regional competition. For the juniors in Industrial Design, RISD Cycling does many things: it connects them to Providence’s passionate biking community, provides them with an outlet for their competitive drives and helps them refresh their studio practices.

“My friends ask me how I find time to get work done when I spend my weekends riding, but I wouldn’t be able to get my work done if I didn’t ride,” says Wright, a sustainability designer who has many of her best design ideas while training or competing. Similarly, Kessler likes how both cycling and studio work invite him to enter into a “flow” state where he makes decisions fluidly and instinctively. “I want to have my bike and design with me wherever I go,” says the cyclist, who got inspired to apply to RISD after reading Bicycle Diaries, the memoir about urban bicycling by Talking Heads founder and onetime RISD student David Byrne.

As co-captains of the co-ed cycling team, Kessler and Wright admit that inspiring their 15 teammates to leave the studio to train is the hardest—but most important—part of leading the team. “Students spend too much time here telling themselves they can’t really do what they want,“ says Wright. “Like, if their brain wants to do something other than what their teacher tells them, then they can’t listen to their brain. But I think it hurts in the long run to put everything aside to be in the studio all the time.” And though cycling can seem to conflict with the expectations of studio culture, the co-captains point out that it actually fits perfectly with RISD community values of inclusivity, sustainability and cooperation.

Wright and Kessler attribute their complementary leadership style to the differences in their cycling backgrounds. “Lizzie knows what collegiate cycling is like from the ground up—from having never ridden competitively to racing at the highest level,” Kessler says, “and is able to share that with the other riders.” Wright, meanwhile, praises his graciousness and humility in advising less experienced team members. And both are actively seeking ways to make the sport affordable for more students.

Having just competed in the Eastern Collegiate Cycling Conference Championships (April 22-23)—in which Kessler took first in the Men’s A Road Race—the duo braved high mountain altitudes and showed strong in the national event. It was a major milestone for Wright, who hopes her achievement will motivate more women to ride with RISD Cycling. And for Kessler, competing in his home state was especially poignant as he remembers his father, who passed away just weeks ago. “I want it to be the ultimate celebration of my dad,” he said before the race, “so I’m going to go out there and give it everything.”

But beyond competing at Nationals, Kessler believes that leading RISD Cycling honors his father even more. “I want to represent RISD in a way that inspires people,” he says, “not necessarily to ride but simply to pursue whatever it is you love—to live a life in which you love your craft and constantly challenge yourself.”

For this year’s Alternative Spring Break, emerging student activists turned their attention to environmental conservation in the Delaware Water Gap.

Running with New Ideas at Reebok

New graduate Luke Gordon 16 ID is excited to join a team of industrial design consultants in the San Francisco office of SYPartners.